On Saturday, the prodigiously talented Sanju Samson registered a majestic double hundred against Goa in the Vijay Hazare Trophy and became only the sixth Indian batsman to achieve the feat in List-A cricket. Surprised? Definitely not. The talent was always there to be seen. Can he continue in the same vein? That remains to be […]
By Karthik Raj Sun, 13 Oct 2019 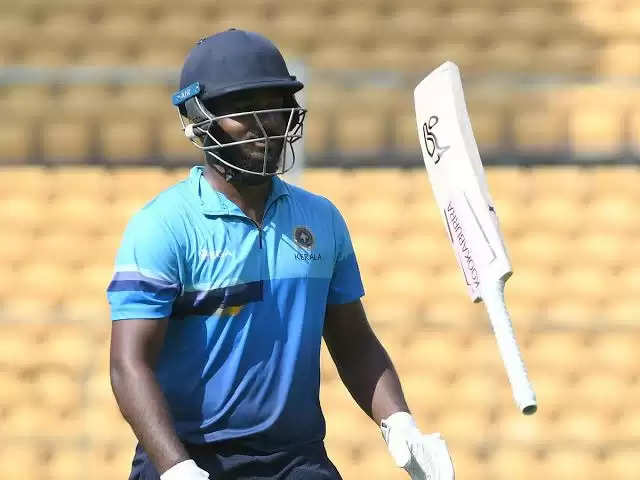 On Saturday, the prodigiously talented Sanju Samson registered a majestic double hundred against Goa in the Vijay Hazare Trophy and became only the sixth Indian batsman to achieve the feat in List-A cricket. Surprised? Definitely not. The talent was always there to be seen. Can he continue in the same vein? That remains to be seen though. Such has been Sanju Samson’s fledgling career so far.

When Sanju Samson burst into the scene in the sixth season of the IPL as a teenager who wowed fans across the country with his eye-catching strokeplay, he was labelled as the next big thing. Six years later, he still remains as the next big thing. Is this Samson flattering to deceive as usual or is he rewriting the script for good. No one would wish that the scenario isn’t the latter one as this is a player who has the ability to adapt to different formats without breaking a sweat.

In the past, like mentioned above, Sanju Samson has impressed pundits and fans alike for short periods before going on an inconsistent run of form. In fact, in almost all of the IPL seasons that he has part of since his debut, this trend has been prevalent. Except the 2018 season when the Kerala-youngster mustered up 441 runs, he has been very predictable in coming up with one or two classy fifties and then fizzling out for the rest of the tournament. Even this year, he didn’t manage to do much apart from his stunning hundred against Sunrisers Hyderabad.

Additionally, the same set of fans who were wowed by his talent also questioned how such a skillful player couldn’t generate numbers that would make the selectors feel pressurized to give a senior team call-up. His First-class average of 36.19 and List-A average of 31.47 haven’t helped his cause and hardly do any justice to his talent. Add his lack of keeping experience at the domestic level and issues with the Kerala Cricket Association (KCA), there was a time when few even feared that he will slip into oblivion.

While all these issues have persisted and perhaps prevented him from getting a proper run at the international level, fans have called for his inclusion in the Indian team even after one or two odd exhibitions of brilliance. This reflects the expectations and belief that Indian cricket has had on Sanju Samson for a long long time. Given that this is the period when India will be trialling out all possible candidates for the wicket-keeper’s spot, this double hundred has come at the best possible time.

Plus the incumbent Rishabh Pant’s failures in the limited over formats may play into Samson’s hands. While Rishabh Pant is still touted as the best young wicket-keeper batsman for T20s, it wouldn’t be an exaggeration to say that Samson would fancy his chances of getting into India’s ODI squad.

Even though the Indian team management promised a long enough rope for Rishabh Pant, there were also signs that Rishabh Pant’s decision-making with the bat wasn’t going down well at all.

“We’ll let him be but at times when you see a shot, like the first ball dismissal in Trinidad, if he repeats that, then he will be told. There will be a rap on the knuckles, talent or no talent,” the head coach said.

“As simple as that. Because you are letting the team down, forget letting yourselves down. In a situation where you have the captain at the other end, a target to chase, the need of the hour is sensible cricket,” Team India Head Coach Ravi Shastri was quoted as saying in an interview with Star Sports.

Consequently, Rishabh Pant failed to take his chances in the recent T20I series against South Africa and was even dropped from the playing 11 for the Test matches. Although Pant will be expected to take the field against Bangladesh when India will play a three-match T20I series at home in November, some more failures could see India looking at alternate options.

All in all, if Sanju Samson continues to pile on the runs, one shouldn’t be surprised if MSK Prasad-led selection panel give him a call-up. But yet again, the operative condition will be – If he can continue to perform well. After all, Samson impressing people isn’t anything new, but consistency will be considering that it is something that hasn’t been tagged along with his name.