Arshdeep Singh has taken on greater responsibility and has delivered consistent, impactful performances for the Punjab Kings (PBKS).
By Naman Agarwal Sat, 7 May 2022 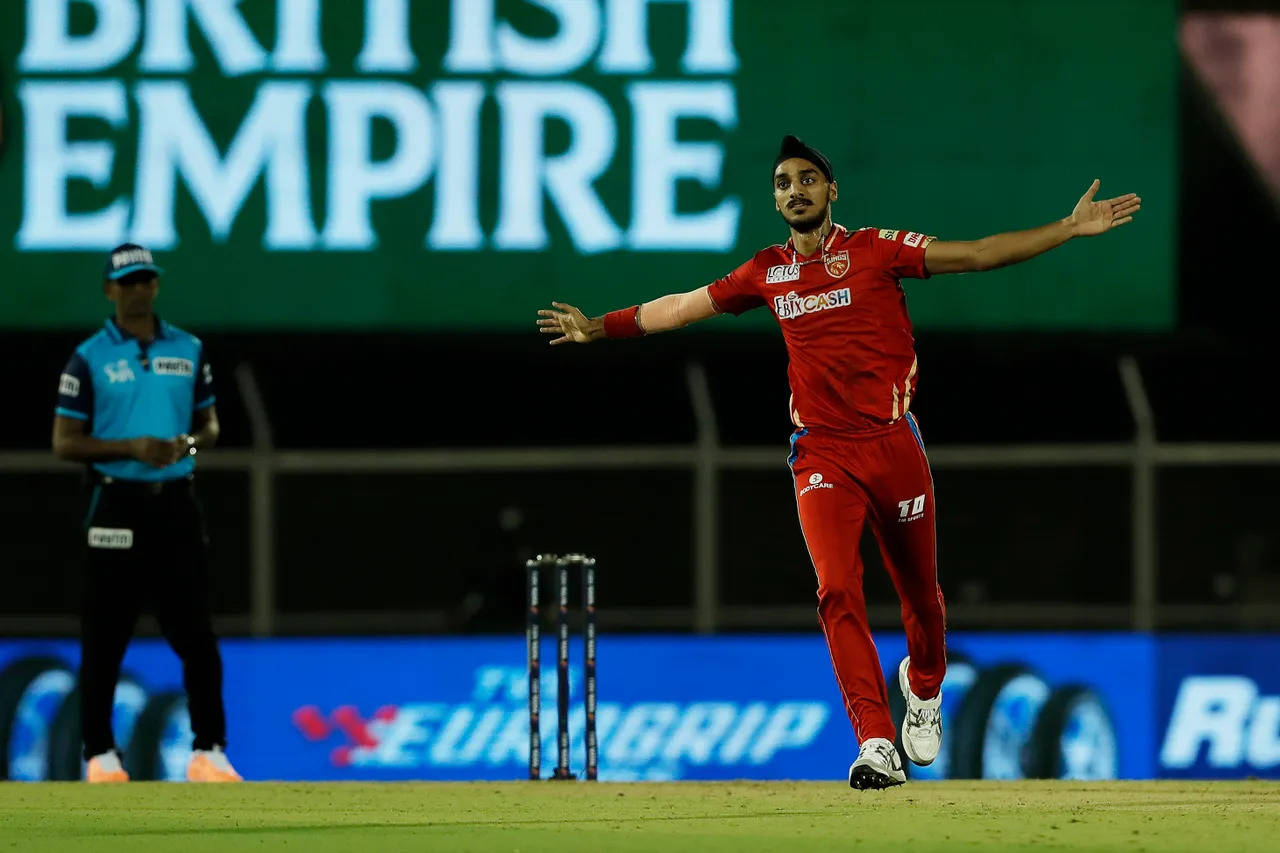 Arshdeep Singh's economy rate of 8.14 in the last five overs is the best among all bowlers in IPL 2022

Ambati Rayudu and Ravindra Jadeja had just scored 23 runs in the 16th over of Chennai Super Kings’ chase against Punjab Kings, bringing the equation down to a very gettable 47 runs off 24 balls, with MS Dhoni to follow. What ensued was a masterclass. Twelve attempted yorkers. Four nailed. Eight nearly nailed. Just thirteen runs and one boundary conceded. Match sealed. Heads turned — Arshdeep Singh, ladies and gentlemen.

Everyone could see the immense promise which Arshdeep had right from the time of his IPL debut in 2019. Four seasons in, and he’s finally turning that promise into consistent, world-class performances and making people take notice. But wait, he has only taken 4 wickets in 10 matches at an average of 66.75 this season, hasn’t he? Even part-timers like Kieron Pollard, Lalit Yadav, Liam Livingstone, and Aiden Markram have better bowling averages than that this year. So why the hype?

In this age, where the dependence on numbers to analyse and judge a player has increased a lot, the fact that Arshdeep’s numbers look rather ordinary on first glance and yet he’s being talked about as one of the biggest positives for Indian cricket to come out of IPL 2022, gives you an indication how special his performances have been.

He might not have taken a lot of wickets, but his overall economy rate has been 7.85. Only four pace bowlers have bowled more and have a better ER than him this season. If you narrow it down to the last five overs of the innings, then you’ll find no bowler who has bowled more than him and has a better economy than him — 8.14. Not even the death specialists Jasprit Bumrah, Harshal Patel, or Dwayne Bravo.

Being a traditional left arm pacer, Arshdeep was primarily used in the Powerplay with the new ball till last season. More than half of his deliveries between IPL 2019–2021 were bowled inside the Powerplay, where he had decent numbers — 12 wickets at an economy rate of 8.05.

At the death, he was a work in progress, alternating between yorkers and length, pace-on and pace-off deliveries. Yet, for a newcomer, his numbers at the death in his first 3 seasons — 16 wickets at an ER of 9.58 — were more than decent.

This year though, his roles have changed a lot. With the addition of Kagiso Rabada to the squad, PBKS have entrusted Arshdeep with more responsibility at the death and have let Rabada and co take on most of the responsibility in the Powerplay. Now this decision might have been taken based on Arshdeep’s growing skillsets or keeping the bowling combinations with Rabada in mind, or both. Whatever might be the case, it has unearthed a gem of a death bowler, with nerves of steel and immense self-belief.

He has bowled more than 40% of his deliveries at the death this year, and has an ER of just 8.14! Just to put it in context, Jasprit Bumrah has an economy rate of 8.53 at the death in his IPL career, and he is considered the gold standard of modern day death bowling.

Bowling the tougher overs in the Powerplay

The overall run rate in the first four overs of the innings in IPL history is 7.34 as compared to the overall run rate in overs 5–6 which stands at 8.25. Historically, bowling last two overs of the Powerplay has been tougher as batters get their eye in by the 4th-5th over and try to maximize the last two overs of fielding restrictions. Which is why teams generally give the responsibility of finishing off the Powerplay to their more trusted bowlers.

While he hasn’t taken a lot wickets, his overall economy in the Powerplay has improved from 8.05 before 2022 to 7.46 in IPL 2022, and his dot % has increased from 39.74% to 52.56%. He is building immense pressure from one end, which is forcing batters to take on the likes of Rabada, resulting in more wickets at the other end.

Glancing at the first column of Fig 4 will give you more than a fair idea of how Arshdeep’s lengths have shifted at the death in IPL 2022 as compared to the last two seasons. In IPL 2020–2021, less than 20% of his balls used to be yorkers, and only around 30% of them used to be attempted yorkers.

This year, those percentages have shot up. Nearly half the time he has run in to bowl, it has been with the intention of bowling a yorker, and he has succeeded more often than not. Almost a third of his deliveries at the death this year have been perfect yorkers! In fact, only Jasprit Bumrah (28) and T Natarajan (33) have bowled more yorkers than him (27) at the death in IPL 2022.

Arshdeep was part of India’s squad for the 2018 U-19 World Cup which they won under Prithvi Shaw. But he was not a first choice seamer in the XI. Ishan Porel, Shivam Mavi, and Kamlesh Nagarkoti were the three front line pacers, with Arshdeep getting two games in the tournament when Porel was injured.

Skip to 2022, and the tables have turned. None of his mates who were above him then, are first choice players in their IPL teams now. It’s a testament to his determination and his willingness to work harder than his contemporaries. As is the case with any domestic player who has a good IPL season, voices for his India debut have gained volume. And when those voices include that of India’s ex-head coach Ravi Shastri, you know the guy in question means serious business.