IPL 2022: Dinesh Karthik – the man on a mission to pull off miracles

Dinesh Karthik has been RCB's hero in the season, scoring at a remarkable rate in the death overs to script spectacular wins.
By Tushar Jain Mon, 18 Apr 2022 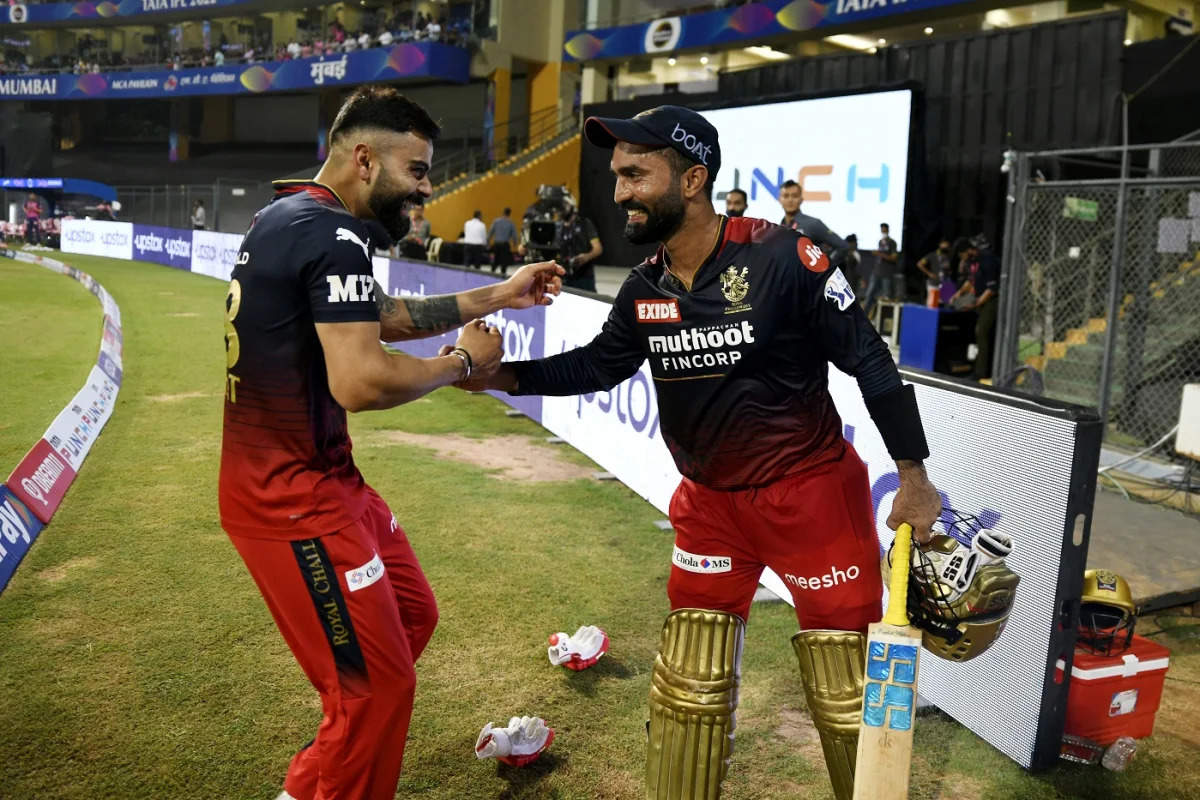 Dinesh Karthik has scored 197 runs at 12.96 RPO while being dismissed only once in IPL 2022. Over 79% of his runs have come through boundaries.

No, the ‘miracle’ in the title is not an exaggeration by any means. RCB were struggling at 87/5 against Rajasthan Royals, they needed 83 runs at over 11 RPO. AB de Villiers wasn’t there to save RCB for the umpteenth time; Glenn Maxwell was also unavailable, and no specialist batter was left.

Two of India’s best T20 spinners – R. Ashwin & Yuzi Chahal – had one over left. In comes Dinesh Karthik; spin-hitting isn’t his strength. After playing his first three balls quietly against Trent Boult, Karthik plundered Ashwin for 20 runs in the 14th over and brought RCB back in the game. The show, from him and Shahbaz Ahmed, went on and RCB won the game with five balls to spare.

Karthik replicated the incredible effort against Delhi Capitals. Despite batting at No.7 – he arrived at the crease in the 12th over –  with RCB down in the dumps again at 92/5 on a pitch that didn’t look good for shot-making in the first innings, Krishnakumar Dinesh Karthik stepped up again. He didn’t look at home against Kuldeep Yadav and Axar Patel, another quality spin duo, but scored 53 runs off 18 balls against pacers to pull off a heist.

Dinesh Karthik’s skill against pace-bowling isn’t unknown. While playing in the IPL and T20Is since 2017, he has been averaging over 44 with an amazing strike rate of 186.32 against pacers in overs 16-20. His balls-per-boundary ratio of 3.6 and about 70% of his runs have come through boundaries. These are ridiculously good numbers, and more so, after having two poor IPL seasons in 2020 and 2021.

Karthik isn’t a typical power-hitter but he has got plenty of shots in his repertoire. He can play scoops, sweeps, paddle-sweeps, slogs, pulls, and other shots, he can loft the ball in the mid-wicket and over covers and has got the ability to hang back and smoke it off down the ground, occasionally.

By playing pulls, lofted & pick-up shots, and various kinds of sweeps, slogs, and scoops against pacers this season, Karthik has scored 124 runs off just 36 balls while being dismissed only once.

Apart from his skillset, Karthik has got the game awareness to play according to the field and dimensions of the grounds. A good example is his reverse hit against Mustafizur Rahman. Fizz bowled a cutter on the short length from over the wicket to force Karthik to hit over the longer against the angle, but the street smart Karthik sort of reverse-pulled it for four in the third man region.

He was also trying to target the short boundaries against CSK as well, and he was going well. But Dwayne Bravo, another T20 maestro, tricked him to hit towards the longer boundary. It was a low full-toss and Karthik connected fairly but couldn’t clear the fence as Bravo had taken the pace off the ball. RCB were in such a situation that Karthik had no option but to hit.

However, more often than not, Karthik has found a way to get things done. Also, he has had some luck on his side in the form of a few dropped catches and some questionable tactics from the opposition.

As the tournament progresses, the pitches will get slower. Also, the teams will want to challenge Karthik a bit by forcing him to play more on the off-side and down the ground. RCB will hope that he continues his good form and keeps acing this tough role.

RCB also deserve a bit of credit for Karthik's success so far. They have nailed his usage so far. In three out of six innings, he arrived at the crease in the 17th over or later. While he was promoted to No.4 against Punjab Kings and Mumbai Indians, RCB sent the likes of David Willey, Shahbaz Ahmed, and Sherfane Rutherford against KKR.

RCB tried to delay his entry points in other matches but the fall of too many wickets meant that they didn’t have any other option. Probably, they could’ve sent Wanindu Hasaranga against Delhi Capitals, but that’s about it. 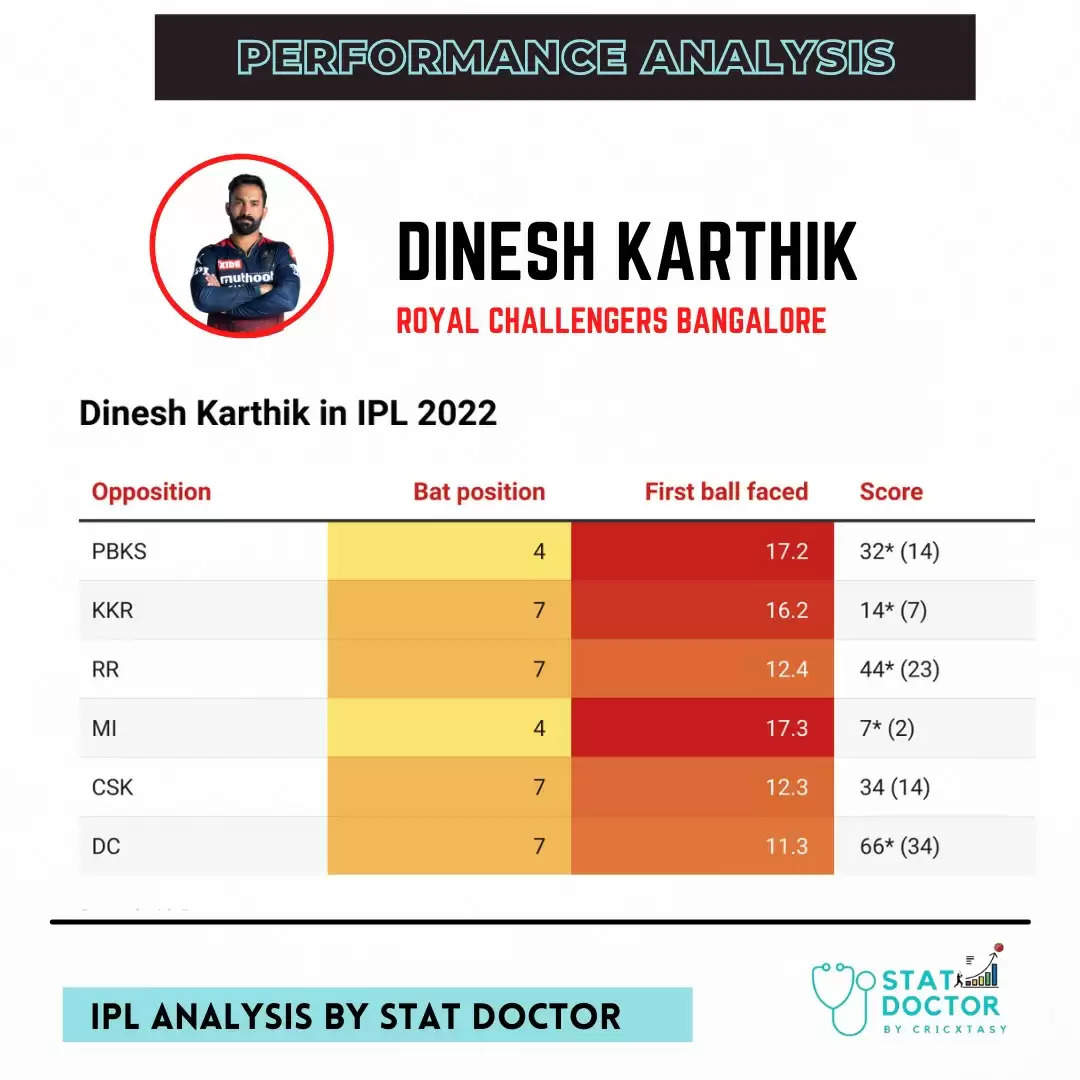 This wasn’t the case in the last two seasons at KKR. Karthik, who is primarily a finisher, batted as many as six times in the powerplay! He batted at No. 3 once and four times at No. 4 - every time in the powerplay. Overall, while batting from No.3 to No.5, he arrived at the crease within the first 10 overs on nine occasions.

KKR sent Karthik ahead of Eoin Morgan more often than not, and before Andre Russell at times. They could have used Sunil Narine in the middle overs but they hardly did. The sluggish pitches and KKR’s batting set-up didn’t help the cause either. Admittedly, Karthik’s game is on another level this season and he could have done better in the past, but there is very little doubt over the fact that KKR could have been wiser.

Shahbaz Ahmed, who has flown under the radar, also deserves a bit of credit for supporting Karthik and stepping up for his team in difficult circumstances. Glenn Maxwell has looked good and the young duo of Shahbaz Ahmed & Suyash Prabhudesai has been very impressive. Their middle-order looks decent for now and RCB would want their top-order to be among runs again.

Because it will be very hard for Karthik to play such knocks regularly after arriving within the first 13 overs. And, of course, a team needs contributions from all the batters over the course of a long tournament.

Dinesh Karthik has expressed his desire to play for India in the T20 World Cup. If Karthik manages to board the flight for Australia, it will be a no mean feat for the man who will turn 37 in June this year. He has been treated unfairly in the T20I set-up, he hasn’t been anywhere near India’s squad for a while now and he had two quiet IPL seasons. But, he is trying hard – to pull off another miracle!