Is the end nigh for Shai Hope and his Headingley tryst?

Almost three years ago, Shai Hope had the world at his feet. In August 2017, he scored twin tons (147 and 117 not out) at Headingley, Leeds to lead West Indies to a famous and an unimaginable win. That 147 laid the foundation of the victory before the unbeaten 117 helped his side pull off […]
By Sahil Jain Mon, 20 Jul 2020 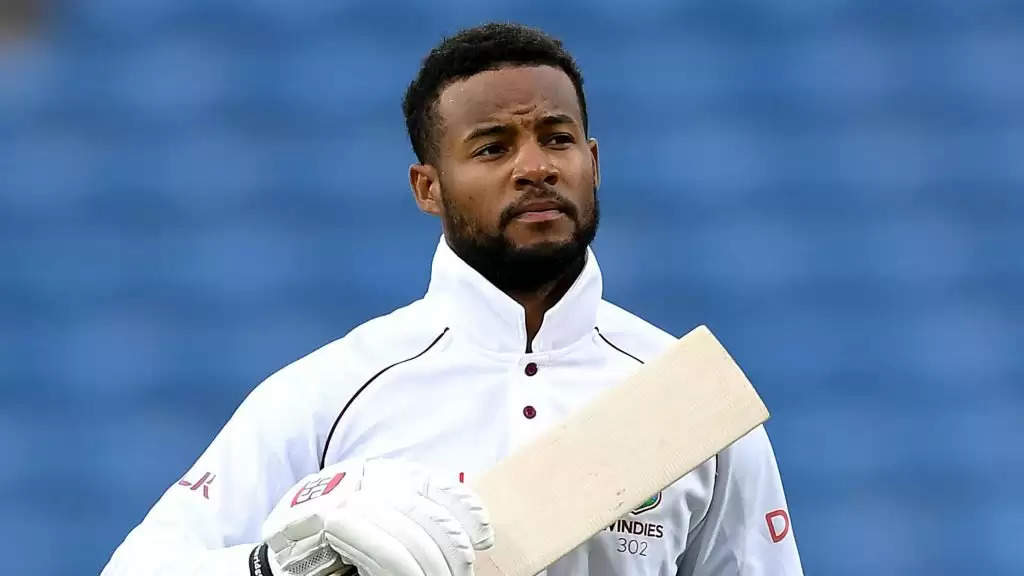 Almost three years ago, Shai Hope had the world at his feet. In August 2017, he scored twin tons (147 and 117 not out) at Headingley, Leeds to lead West Indies to a famous and an unimaginable win. That 147 laid the foundation of the victory before the unbeaten 117 helped his side pull off a heist by chasing down 322 in the fourth innings.

However, three years down the line and 21 Test matches later, those 264 runs that he scored in the Headingley Test in 2017 make up for nearly 17% of his Test runs. In fact, that year – 2017– accounts for nearly 50% of his Test runs. Hope scored two hundreds and three fifties while amassing 773 runs and averaged 45.47 in 2017 which is his best by a country mile.

And out of those 773 runs, 375 of them came on that 2017 England tour where he got out in single figures just once across six innings. Again, that was by far, the best returns in a series for him in his Test career. He looked like a beast and it seemed like West Indies had found a solid Test batsman who could play any role possible and be a match-winner.

Moreover, since the start of 2018, the Barbados-born batsman has the second-worst average for any batsman, batting in the top seven (minimum of 20 innings). He has scored 559 runs at an average of 19.27. He has just two fifties (one each in 2018 and 2019) to show for as well. Only Moeen Ali who has shuffled around the England batting order a bit has a worse average (17.05) in the aforementioned period. 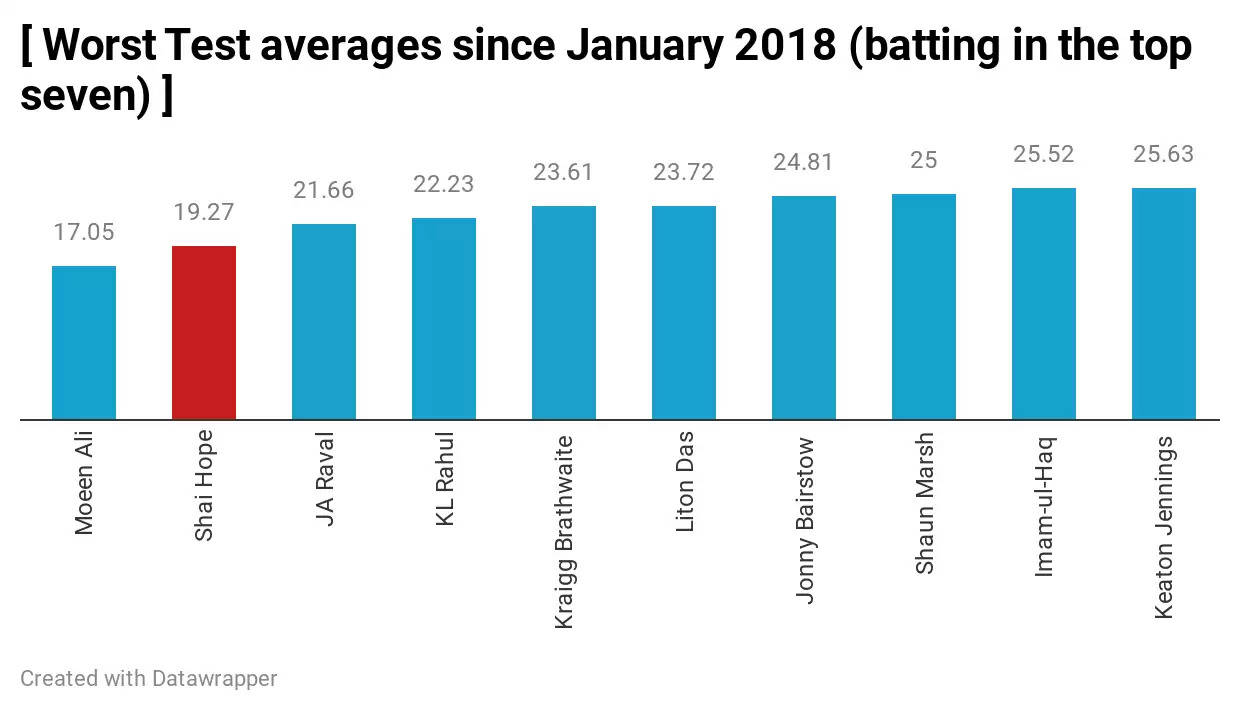 Moreover, this slump in Test cricket has coincided with his meteoric rise in ODI cricket. He’s scoring a truckload of runs in ODI cricket. Hope has amassed 2502 runs since January 2018, which is the third-most behind Virat Kohli (2837 runs) and Rohit Sharma (2691 runs). The top-order batsman has an average of 61.02 and has eight hundreds to his name as well in this period, which is again the third-most.

Thus, there is no doubt that Hope is a quality player. The Barbadian has shown in ODI cricket where he plays the role of the anchor to perfection and showed it back in 2017, that he belongs at the highest level.

On multiple instances, he has looked good in the middle and has played some beautiful and fluent strokes. Some of the drives and the shots that he plays, makes you wonder why his Test average is lying so low, why he hasn’t scored big more often. However, most of his innings are largely short-lived. Time and again, he gives the sense that he has the game, temperament and the class scale heights in the longest format. Yet, he flatters to deceive. His problem has been getting in.

In his 32-match and 62-innings Test career, all Hope has managed is a total of seven fifty-plus scores, including those famous twin hundreds. In fact, those are the only hundreds he has scored in Test cricket. He’s been out under 20, as many as 35 times, including the dismissal in the second innings of the ongoing second Test against England. Out of those 35 times, 19 of them have come since January 2018. 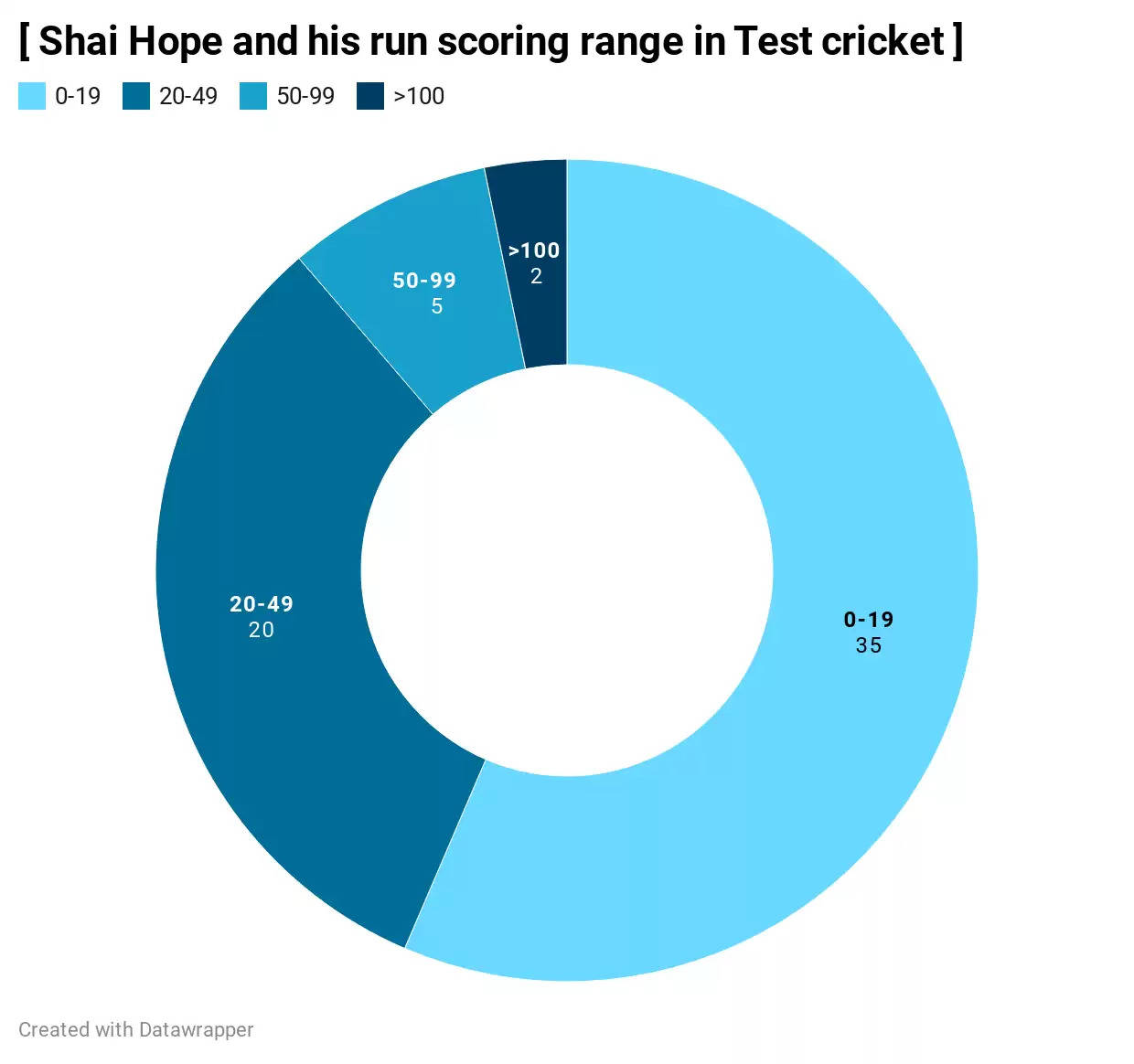 Shai Hope and his range of scores in Tests | Stat Courtesy: Twitter/@stat_doctor

“Shai is a quality player. We have seen that the last time he came here to England. Obviously his one-day form has been really good, so I have got all confidence in Shai Hope that he’ll deliver. He just needs to get in, get himself going and he’s going to go big for us,” Jason Holder was quoted saying ahead of the second Test.

There, that exactly seems to be his problem. Hope is just not been able to get set and bide time in red-ball cricket. And there are two stats that standout. The intent doesn’t seem to be troubling him. He hasn’t really gone after the bowling or anything as such.

Hence, time might be running out quickly for Hope. He has got an extended run in this Test team. In the last two and a half years, he has just six scores of more than 30 and none more than 67. In fact, Kemar Roach has scored more Test runs than Hope since February 2019. That’s how shoddy Hope’s form has been in the longest format.

His scores this year read – 16, 9, 25 and 7 – all four innings in this series. The next Test might just be his last chance to redeem himself. Two of West Indies’ frontline Test batsmen, Shimron Hetmyer and Darren Bravo declined to travel to England and they are likely to walk back in. Joshua Da Silva has forced and broken his way into the Test set-up and seems to be a solid top-order batsman. He scored 133 and 56 (both unbeaten knocks) in the second intra-squad warm-up fixture to exhibit his class and quality.

Thus, the end (at least for now) is largely looking nigh for Hope and his Headingley tryst. It’s remarkable how Hope is remembered for that one Test match. You think of Hope and you think Headingley 2017. It is hard to think that Hope is the same player who pulled off that heist in 2017 (those twin tons). But all he averages in his Test career is a mere 26.36 which is far too low for a player of his quality.

As many as 80 players have scored twin tons in the history of Test cricket. However, only five of them haven’t scored a ton after those twin tons and Hope is one among them.

The multi-format nature of Hope’s career and a tweak in his technique to adapt to white-ball cricket might’ve played a role in his wretched run in Test cricket. Also, he hardly plays any domestic cricket back home. The last time Hope played a red-ball game apart from international Test cricket was back in early 2017. It seems that Hope is slowly but surely becoming a baggage in this West Indies Test team.

Hope might just need to go back and start scoring runs again in domestic cricket. Maybe, he needs to go the route that Jermaine Blackwood took. He could be a very good example as he hadn’t played Test cricket since October 2017. But Blackwood went back after being dropped and scored loads of runs to force his way back into the Test team.

Maybe, Hope needs to do the same. At the moment, his confidence looks shattered in Test cricket. He looks pleasant at times, but the struggle has been a prolonged one. Hope is just 26 years old and there is a lot of time ahead in his career. So, he can surely resurrect his Test career and get it back on track.