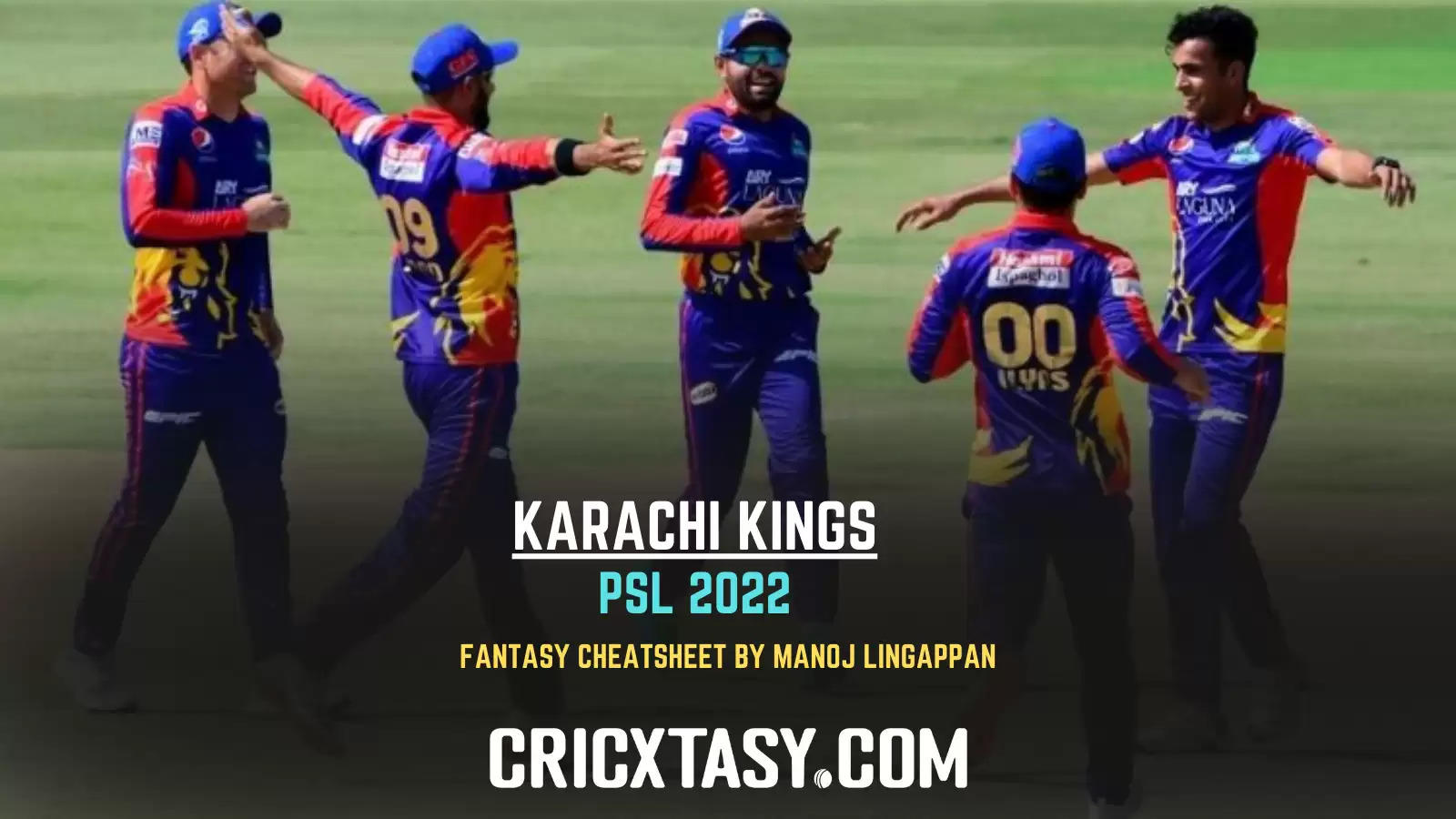 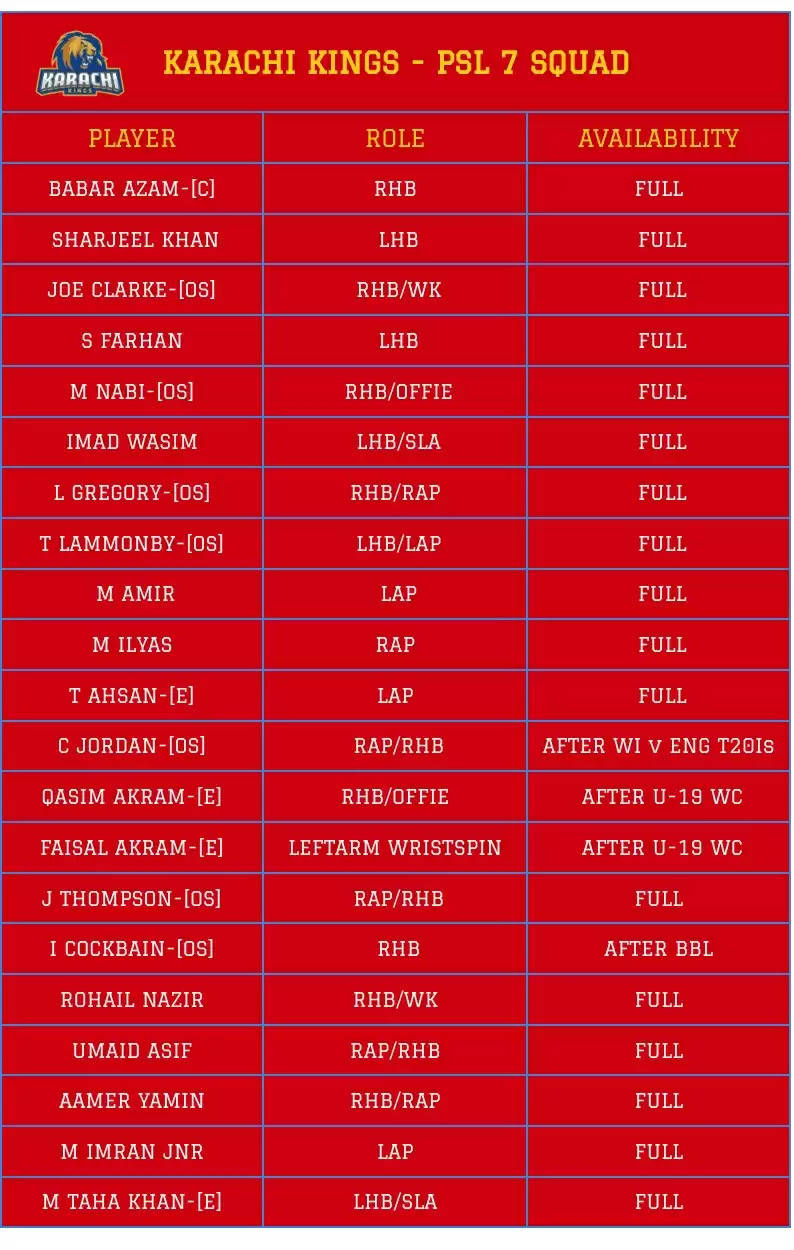 Karachi Kings have never failed to make the playoffs since the inception of PSL yet they’ve won the trophy only once. Ahead of PSL 7, the Karachi based franchise decided to rejig their setup by giving the captaincy to Babar Azam, the national team captain from Imad Wasim who’ll still continue with the franchise. Peter Moores, the former England team coach who has won two T20 Blast titles with Nottinghamshire has been appointed as the head coach and they will start their campaign against the champions Multan Sultans in the season opener. 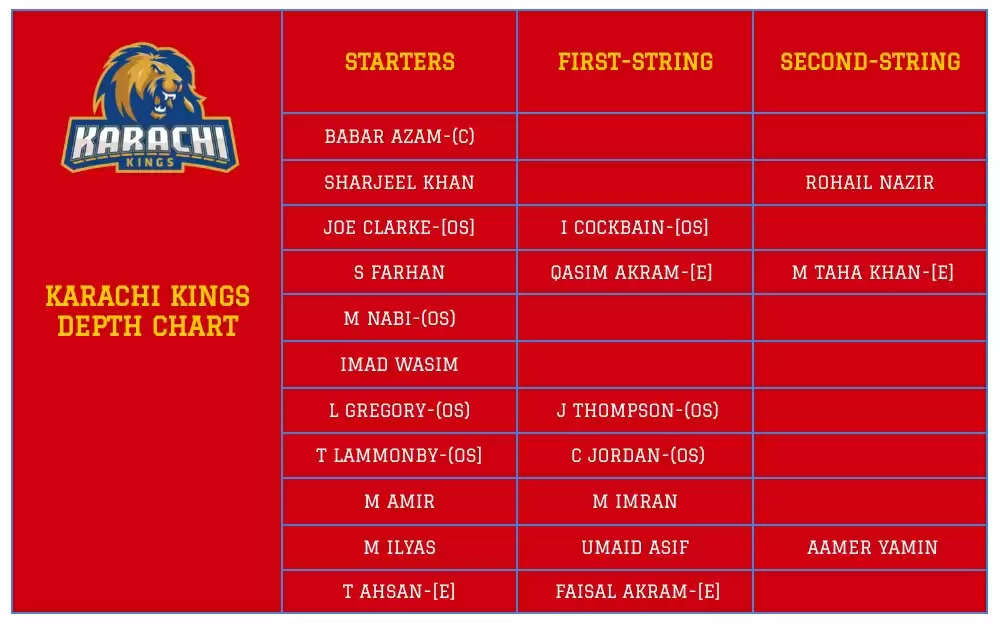 Ahead of the PSL 7 draft, Karachi Kings retained eight players: B Azam, I Wasim, M Amir, M Nabi, Sharjeel Khan, Joe Clarke, Aamer Yamin and Mohammad Ilyas. With the top-order set and having retained two international quality bowlers, Karachi Kings went into the draft filling the remaining slots. They first bought C Jordan to address the death bowling which was an Achilles Heel for them last year. They then bought the all-rounders L Gregory and Umaid Asif. Among the local players, they bought the talented U-19 players Qasim Akram and the left-arm wrist-spinner Faisal Akram, who got the wicket of Babar Azam during an international practice nets. Rohail Nazir was picked as the back-up keeper, while Mohammad Imran Jnr, the left-arm quick was their wildcard pick. They completed their squad by buying I Cockbain, T Lammonby and Jordan Thompson in the replacement drafts after their initial picks T Abell and R Shepherd withdrew from the tournament. Overall batting seems to be their stronger suit once again, while their bowling attack lacks an established wrist-spinner and their experienced pacers Amir and Jordan haven’t been effective in the last couple of years.

A player who has proven himself to be a top-scoring fantasy player and is basically popular.

Babar Azam – The current No.1 T20I batsman and also the highest run-getter in PSL history. He’s as consistent as anyone can get and the presence of two dynamic hitters around him, Sharjeel and Joe Clarke will enable him to go about his business as usual.

The players who provide good value for their credits and can be banked upon for consistent returns.

Joe Clarke – Expected to bat at No.3 for the Kings, Joe Clarke is all set to light up the PSL with his aggressive batting. He displayed some good form in the BBL scoring 419 runs from 13 games. His wicket-keeping points are a bonus.

Sharjeel Khan – He’s crossed the 200 run mark in all PSL seasons where he has played more than a game. He enjoyed his best season last year and with recent form on his side, he’s a reliable fantasy option.

M Amir – He had an underwhelming season last year picking only 5 wickets from 11 games, his lowest in a PSL season. While his recent form doesn’t inspire much confidence, he’s the first choice death bowler for the Kings which should help his wicket tally.

Chris Jordan – Similar to Amir he hasn’t been at his best for a while now but even then he manages to bag wickets at the death. He’s among the top ten wicket-takers at the death in all T20s since 2020 and there are good chances his batting will be utilised considering the form of the Karachi Kings middle-order batters.

The player who provides decent enough value but is undervalued or is just not a well-known player.

Sahibzada Farhan – He recently won the PCB’s Domestic Cricketer of the Year award for his terrific showing in domestic first-class, 50 overs and T20 competitions. He is the leading run-scorer in the 2021 National T20 Cup and will most likely bat at No.4 for the Kings where his spin hitting gears will help him score.

A player who looks like a good buy, but won’t score enough points to be of much use.

Imad Wasim – His economy rate of 7.07 is the eighth-best in PSL history, of those who bowled a minimum of 20 overs which is terrific in the T20 scene but he picks up a wicket once every 29 deliveries which doesn’t help his fantasy value. His batting down the order too isn’t powerful enough to consider it a package.

The players who carry an element of risk with them which might be due to bad form, injury, lack of game time, etc……

Lewis Gregory – As a package, Gregory offers great value from a fantasy point of view but last year was his worst in T20 cricket with both bat and ball. His batting strike rate of 122 and economy rate of 10.3 in 2021 is his worst in a year in T20s but everything said he can still be relied upon to get some wickets but his batting has been a letdown.

Mohammad Nabi – Similar to Gregory, Nabi’s batting has seen a dip in recent years. He’s coming off a forgettable BBL season scoring only 36 runs from 7 games at an average of 5.1. With his bowling now only being match-up specific, there’s not much to tap in there.

Mohammad Ilyas – He’ll most likely occupy the third seamer spot ahead of the likes of Umaid and Aamer. His form in the domestic competitions are a concern though and with a slew of all-rounders in the eleven, there’s a high chance he might not be able to complete his quota.

The players whose credit values are less but still provide some decent value and so help balance out the lineup.

Talha Ahsan – He’s the only right-arm wrist-spinner in the squad and the front-runner to occupy the Emerging Player spot in the absence of Qasim Akram.

Qasim Akram – The powerful U-19 batter provides decent value with both bat and ball and is light on the purse.