In 2010, Sir Alastair Cook, the current leading run-scorer for England in Test cricket, was going through a rough patch in his home nation. In the two-match Test series against Bangladesh, Cook couldn’t cross the 30-run mark in all his three innings. About seven weeks later, England, in their backyard, were up against Pakistan. In […]
By Tushar Wed, 20 May 2020 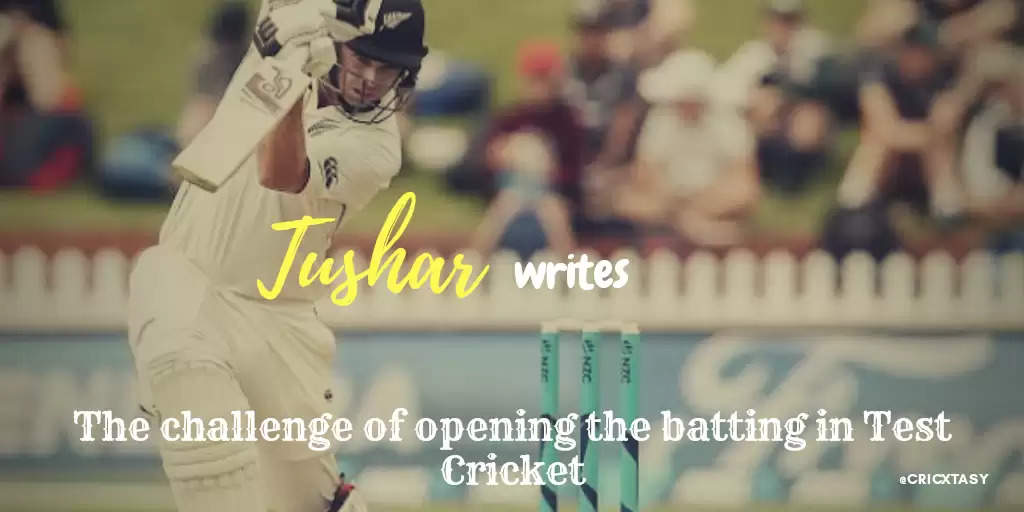 In 2010, Sir Alastair Cook, the current leading run-scorer for England in Test cricket, was going through a rough patch in his home nation. In the two-match Test series against Bangladesh, Cook couldn’t cross the 30-run mark in all his three innings. About seven weeks later, England, in their backyard, were up against Pakistan. In the first two Tests of that series, the opening batsman failed to go past the 20-run mark in all four innings.

The left-handed batsman would be slightly low on confidence, and there were talks regarding his place in the English side. However, the English captain – Andrew Strauss, backed his batting partner to come good. After the second Test match against Pakistan, Strauss said, “Opening the batting in Test cricket can be tough at times.” The skipper felt that a big score from Cook was just around the corner and added: “I’ve got no doubts that he will come back and play very well in the near future.”

In the next Test match against the same opponent, Cook redeemed himself and scored a century. No, this article isn’t specifically about Cook; it highlights how difficult it is to open in the longest format.

Is opening the innings really the toughest job?

On a fresh pitch of Day 1 in a Test match, the bowler makes the ball talk, the batsman edges or misses, the spectators in the ground whisper Oooh!, the bowling team becomes happy, the batsman at the crease has a wry smile – a sight to behold! The bowler looks to thrive, the batsman looks to survive – by defending/leaving good balls – the battle is #OnOn as Michael Vaughan often says.

To succeed as an opener in the Test cricket across conditions is like cracking a hard nut. Only a few who have strong teeth (technique and temperament) succeed, the others don’t.

Batting, irrespective of the batting position, isn’t an easy task in non-familiar conditions. However, the openers have an added task as they face the new red-cherry which moves more as compared to the slightly old ball, in normal conditions. The deviation of the ball depends upon the quality of the opposing bowlers, the pitch and the breeze.

The numbers, since 2011, tell that opening batsmen, away from home, haven’t yielded the best results – or you can say they have come up with the worst returns in terms of batting averages and balls per dismissal. Having the highest sample size of 1,408 innings, the openers lead the run-charts with the highest number of centuries and half-centuries. And, they also have bagged the highest number of ducks. The number of innings, runs, tons, half-centuries and ducks for openers are quite high as compared to batsmen batting at other positions, because two openers bat in an innings.

A team would expect their opening batsmen to either score runs or make the ball old as much as possible. But, the average of 30.45 and the balls-per-dismissal ratio of 63.71 – which are the least, tell that the batsmen haven’t succeeded in either of their jobs. But they aren’t completely at the fault. The teams don’t send their best batsmen to face the tougher challenge, and the bests are rather preserved from the new ball. And, yes, that move has a logic.

Have openers failed to deliver the goods in the recent past years, only?

The general perception, among the cricket followers, is that the introduction of the T20 cricket has affected the batting of batsmen in Test cricket. Graeme Smith, a great Test opener who averaged about 50 in 196 innings as an opener, presented his views on this topic. During the Test series between India and England in 2018, Smith, in an interview with Cricbuzz, said that the modern-batsmen lack patience.

Whilst the evolution of T20 cricket has affected the production of patient batsmen, it is wrong to completely blame the concerned format. Yes, the batsmen want to succeed in the white-ball cricket, but did the openers boast of a great record before the T20 cricket established itself as a giant format? The answer is “no”.

The decks, in the recent past years, have favoured the bowling and have been tougher for batting. Since 1960, the year 2018 saw the lowest overall batting average (26.28) of batsmen and the best overall bowling average (27.37). Whilst the batsmen have failed to perform up to the mark, the bowlers deserve the credit as well.

Which is the most difficult nation to open the innings?

It is difficult to succeed in Test cricket across the globe. Different nations, different kinds of cricket balls and varying conditions in different continents test a batsman’s skill. To taste success across the globe, a batsman should have the ability to adjust according to the conditions.

England, West Indies and Ireland use the Dukes; India have the SG ball and the rest of the nations have the Kookaburra ball. The Dukes used in the West Indies is different from the Dukes used in England. The Dukes ball maintains its shape for a lot more overs and swings more as compared to the other balls. Thus, when a batsman is against the Dukes ball, he can’t be relaxed against the old ball as well.

The below graph tells the overall average, the average of home teams and the average of away teams – of openers – by hosts nations since 2011 (the countries which have hosted minimum 30 Test matches in this duration are taken into the account).

Going by this stat, the West Indies is the toughest nation to open the innings in Test cricket. But, it has to do with the quality of the openers of the host nation as well. The West Indies’ openers are the only ones to average less than 30 in their den.

ALSO READ: Australia climb to the top of the ICC Test Rankings after 4 years

Interestingly, Australia is the only nation which has an average of over 40 and you might think that they are the easiest nation to open in. But, no; the overall average is flattened because of the surreal performance of the Aussie openers at home. And, the openers of the visiting teams average just a bit more than 30.

It will be tough to name any one nation as the toughest to open the innings – batsmen generally struggle in alien conditions. But, it can be said with amount of certainty, South Africa, England and the West Indies dish out some great challenges for the batsmen.

Which team’s opening pair has tackled the new ball, most successfully, in the recent past few years?

As mentioned earlier, the new ball is quite a big challenge for the openers. And, this challenge becomes even tougher when the teams travel in the nations with non-familiar conditions. You would want your openers to see off the new ball, irrespective of how much they score at the beginning of the innings.

Also, the conditions across Asia generally remain the same, thus, for the Asian openers, we won’t take away matches in Asia into the account.

Interestingly, every team has a failure percentage of more than 65.

Sri Lanka, Australia and Bangladesh had one such partnership in which one of the partners got injured. As such, they had two partnerships for the first wicket in the same team innings. However, we have considered that as one – and co-incidentally in all the three innings, the first wicket fell after the 75 balls.

South Africa have the highest failure percentage, and their opening pair(s) successfully saw off the new ball in just five innings. Touring five nations in this duration, the only country in which their opening pair(s) averages more than 20, is Bangladesh. And, for the record, the Proteas have played just one Test match in Bangladesh – in 2015, where the duo of Dean Elgar and Stiaan van Zyl produced a good performance.

Sri Lanka, as the most successful team in this given stat, would be a surprise for many. But they deserve credit for their performance. Even though their opening pair averages over 54 against Zimbabwe – a not so strong side, their opening pairs have produced fairly good performances in other nations too. Also, Zimbabwe falls under non-familiar conditions for the Asian nations. 11 out of their 15 successful partnerships came against New Zealand, England, South Africa and Australia.

England and Australia are the only two teams to have a sample size of more than 50 innings and feature in the top four as well – quite impressive! The English openers were fantastic against India in 2016, and have been pretty good in South Africa in this duration. The positive thing for England is the recent performances of Rory Burns, Zak Crawley and Dominic Sibley in South Africa and New Zealand. Eight out of their 20 successful partnerships don’t include Alastair Cook, so yeah, a positive sign for England.

ALSO READ: I would love to win a Test series in India: Steven Smith

The Aussie openers have been pretty good in South Africa and decent in the West Indies in this duration, and were good in England in the Ashes 2015. But, yeah, they failed to tackle the new ball well in the Ashes 2019 as they couldn’t stitch even a single partnership which could last at least 75 balls. And, their openers still need to come good in Asia and New Zealand in the future to be considered really good.

The Pakistani openers were superb in the West Indies in 2017, however, they need to improve their performances in other non-Asian nations, particularly in England and Australia. Also, only three out of their 10 successful partnerships don’t include Azhar Ali, and that should be a concern for Pakistan. Since October 2018, Azhar has opened in only two innings, and his recent performances in non-Asian nations don’t inspire enough confidence.

New Zealand are the second-most successful team. However, they need to better their performances in Australia, South Africa and Sri Lanka. Since 2017, the Kiwis had nine opening partnerships and only two of them were successful.

The openers of India, West Indies and Bangladesh desperately need to better their performances to yield something substantial for their respective teams in challenging conditions.

Who are the best Test openers, currently?

Take a look at the chart. It shows the performance of the openers, away from home, who have played at least 20 innings. And, for the Asian players, we don’t consider away matches in the subcontinent.

The picture is crystal clear, it’s Azhar Ali. But, hold on, he isn’t a regular opener now, as mentioned above. The next two names are Tom Latham and Dean Elgar.

But still, let’s go a bit deeper. For this, we will consider the openers who have at least 30 innings to their names in the above chart. Since Cook has retired, we will exclude him.

Also Read: Who is the best T20 opener in the world at the moment?

We will see how the other openers performed in the games the considered openers featured – across conditions. Let me make it clearer, by taking the example of Tom Latham. Since 2015, the southpaw averages 42.23 (A1) with a balls-per-dismissal of 89.05 (B1) in 77 innings. Now, we will take a look at the performance of other opening batsmen in the matches involving Latham. The overall performance of other openers is:

Warner stands out in the average difference. But, is he the best opener? No. His performance in away games is abysmal. Latham and Elgar stand out in away games metric as well. To find an opener who can deliver the goods across conditions is quite tough, or you can say it’s almost impossible. Consider all of the above, we can zero in on Tom Latham and Dean Elgar as the top two Test openers currently.