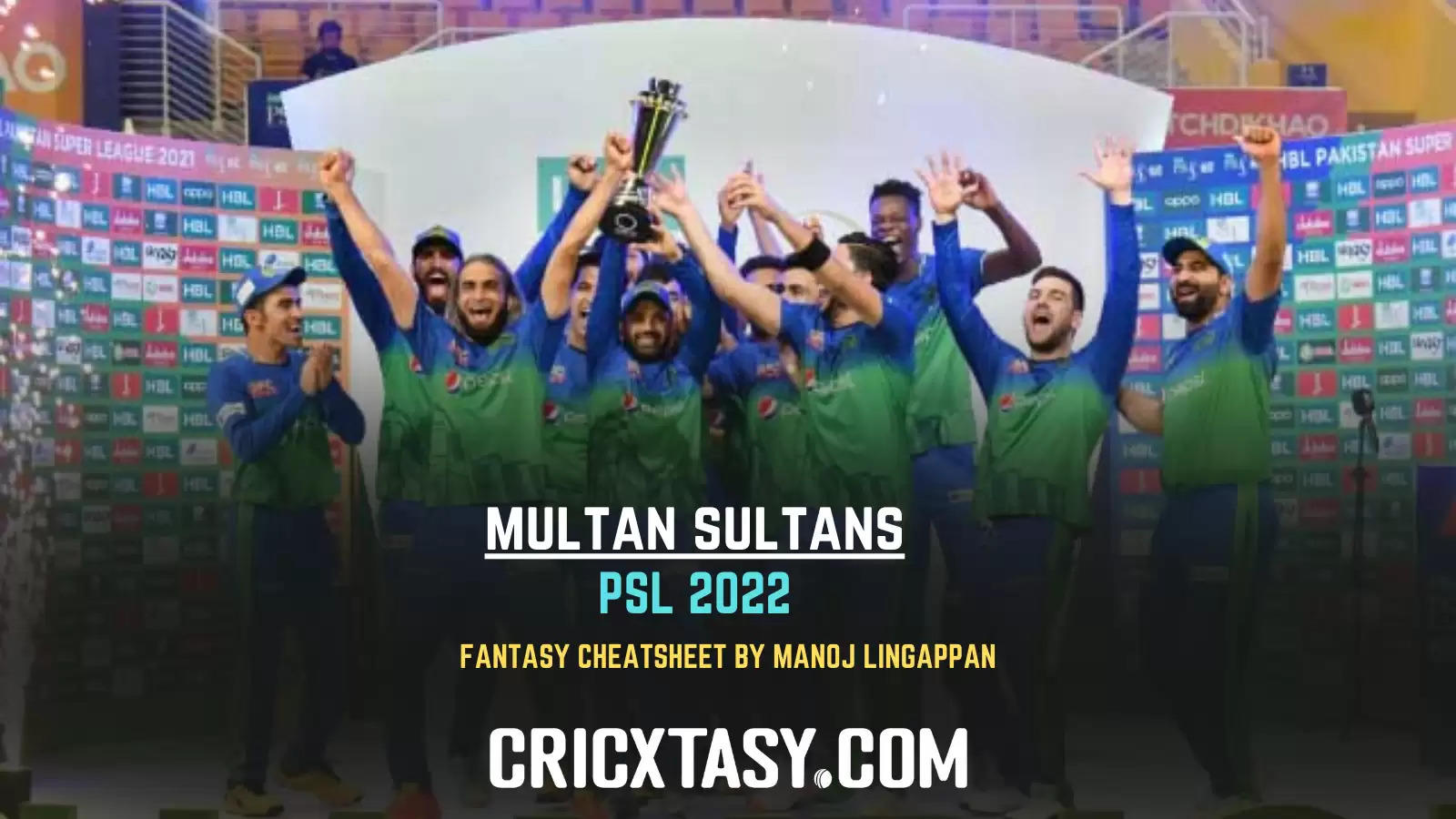 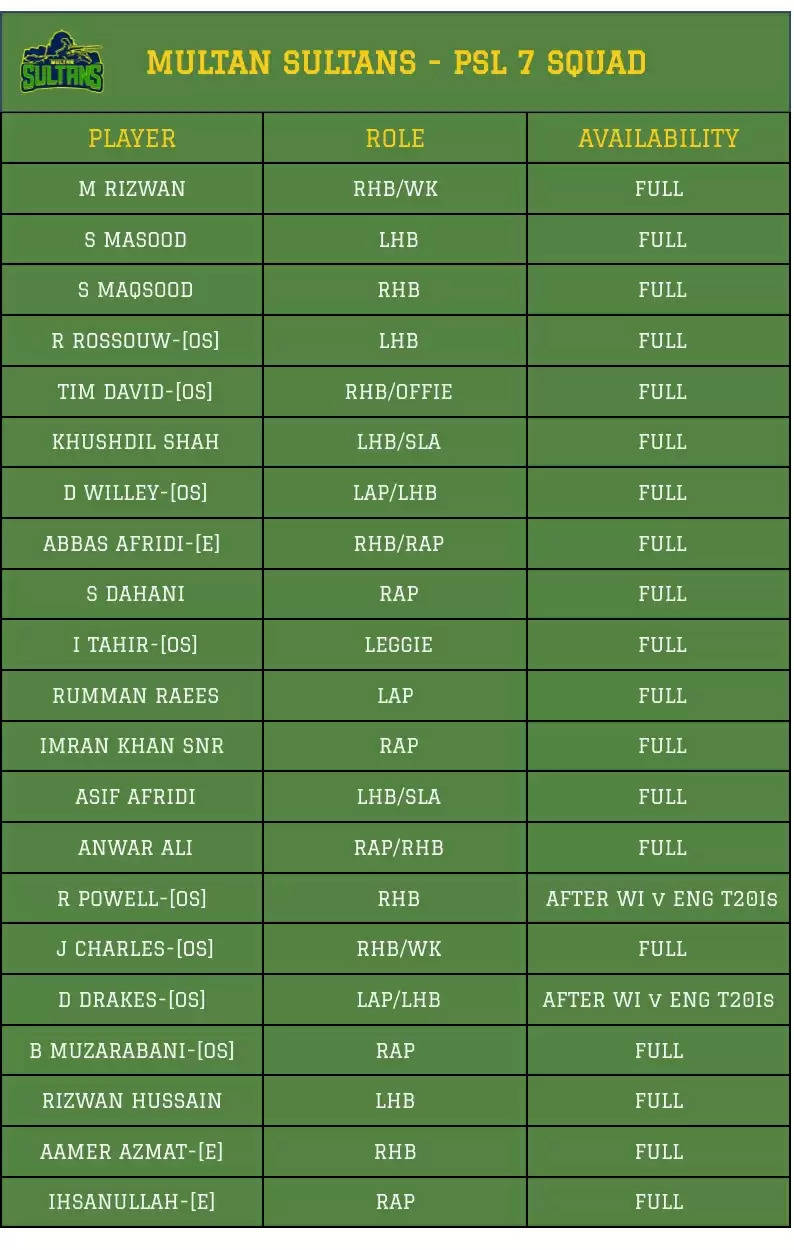 Multan Sultans have been a force to reckon in the PSL ever since the change of ownership in 2019. With a data-driven approach and under the able tutelage of Andy Flower, the Multan based franchise finished as the champions last year becoming the fifth franchise to lay hands on the PSL winners trophy. After a gloomy start to the season last year where they managed a solitary win from 5 games in the Karachi leg, the Rizwan led side staged an epic turnaround in the UAE leg winning 6 out of the 7 games including the finals eventually crowning as the champions.

Ahead of the PSL 7 draft, Multan Sultans retained seven players: M Rizwan, R Rossouw, S Maqsood, I Tahir, Khushdil Shah, S Dahani & S Masood. With a solid top-order, a gun legspinner and a promising fast bowler as the core, Sultans started to fill the other slots in the draft. They beefed up the middle-order with the acquisition of Tim David, R Powell and Odean Smith(eventually replaced by J Charles). They bought back Imran Khan Snr and Muzarabani with the experienced Rumman Raees completing the fast bowling department. With a slew of all-rounders in D Willey, Abbas Afridi, Anwar Ali and Asif Afridi, the squad looks rounded. Abbas Afridi, Aamer Azmat and Ihsanullah are their three emerging picks with Afridi more likely to start. Areas of concern are their spin department which seems to rely solely on an ageing Tahir especially in the absence of Afridi and U Qadir and the viability of their pace attack in what is about to be flat tracks in Pakistan especially in the absence of a quality death bowler remains to be seen. 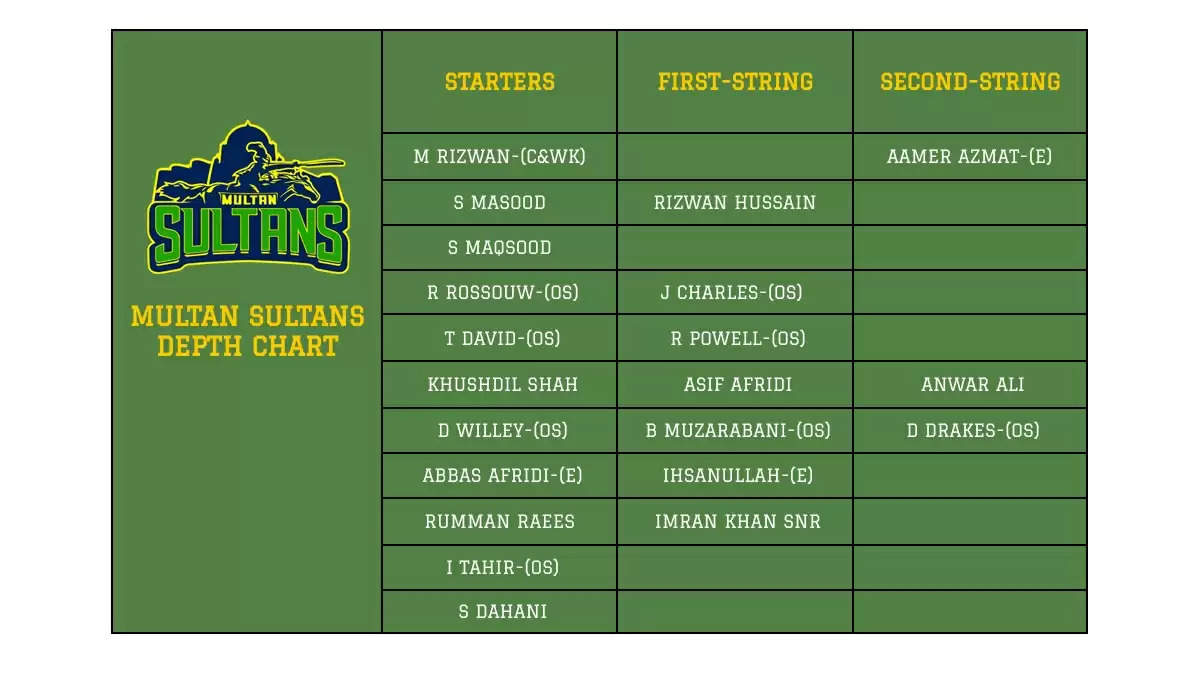 A player who has proven himself to be a top-scoring fantasy player and is basically popular.

Mohammad Rizwan – He’s had an unforgettable year as far as T20s are concerned with the ICC naming him as the T20I Cricketer of the Year. He would be at the centre of the opponents bowling plans this season and they’ll certainly try to exploit his outside-off stump weakness against pacers. But still, trust him to have a good season with his wicket-keeping providing dual value in terms of fantasy points.

Mohammad Rizwan now has the most runs in a calendar year in T20Is!

What a brilliant year the Pakistan wicket-keeper has had

The players who provide good value for their credits and can be banked upon for consistent returns.

Shahnawaz Dahani – The leading wicket-taker of last season has been upgraded to the Gold category this year. While most of his wickets came in the UAE leg last season he’s talented enough to adapt to the flat decks at Karachi and Lahore. He’s going to be Multan’s first choice death bowler this season, the phase where bowlers get a lot of wickets.

Imran Tahir – The veteran legspinner is a proven performer all around the globe in this format. While there has been a slight dip in his performances since the pandemic began, he’s still a genuine wicket-taker in this format of the game.

Shan Masood – He might not be a superstar batter but he provides decent value opening the batting for the Sultans. He’s in good touch with the bat too scoring 3 hundred in 4 games in the recently concluded Quaid-e-Azam trophy.

Tim David – He has enjoyed tremendous success as a powerful middle-order batter in leagues all around the globe and with Multan lacking a secondary spin option apart from Tahir, his offspin will come in handy which adds to his fantasy value.

The players who carry an element of risk with them which may be due to bad form, injury, lack of game time, etc……

Sohaib Maqsood – His form in the recently concluded Lanka Premier League is a concern where he managed just 41 runs from 5 innings getting out to spin on all 5 occasions. While he’s surrounded by able spin-hitters in the Multan setup, it’s still a risky pick.

Rilee Rossouw – Hasn’t been at his best in the last year and while he enjoyed success in the CSA Provincial T20 Cup, he’s coming back from a hamstring injury sustained during the T10, so it’s best to wait and watch.

The players who provide decent enough value but is undervalued or is just not a well-known player.

Rumman Raees & Imran Khan Snr – Both the fast bowlers would fight for the same spot in the eleven. Imran Khan had a good season last year and is the leading wicket-taker in the recently concluded National T20 Cup but Raees might start ahead of him considering the franchise bought him ahead of Imran at the draft.

A player who looks like a good buy, but won’t score enough points to be of much use.

David Willey – He offers dual value with the bat and ball. While his batting is more effective at the top of the order, the likelihood of that happening is quite low and a bowler who bowls predominantly in the Powerplay isn’t rewarding enough from a fantasy perspective.

Khushdil Shah – While he’s a sure starter, the addition of Tim David into the squad and the presence of two anchors at the top will most likely affect his game time in the middle.

The players whose credit values are less but still provide some decent value and so help balance out the lineup.

Abbas Afridi – As said earlier, Abbas Afridi is the one more likely to slot in the Emerging Player Quota considering he can contribute with both bat and ball.