Who is the best T20 opener in the world at the moment?

It was back in 2003 that the first-ever T20 was played. And cricket has never been the same. As it has grown, the game has evolved rapidly and it’s become a crucial format as well. Batting has changed quite a bit since then as well. The role of the openers has evolved into a significant […]
By Sahil Jain Sat, 11 Apr 2020 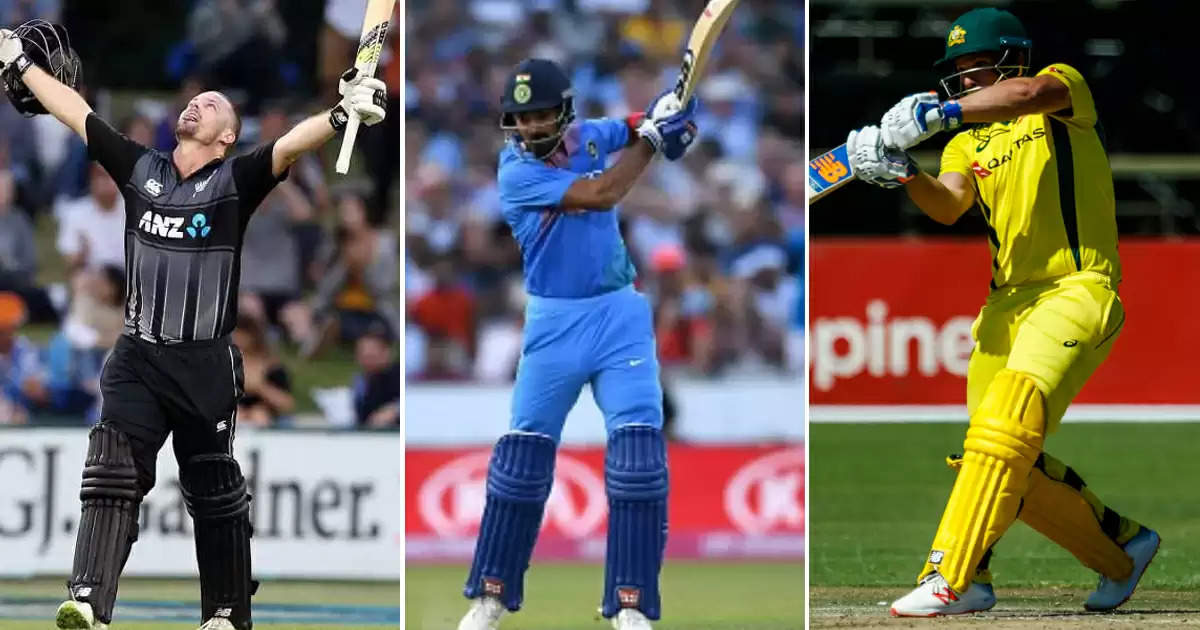 It was back in 2003 that the first-ever T20 was played. And cricket has never been the same. As it has grown, the game has evolved rapidly and it’s become a crucial format as well. Batting has changed quite a bit since then as well. The role of the openers has evolved into a significant one. So who is the best T20 opener in the world?

The top three are the ones doing the bulk of the scoring and unlike the other two formats, T20 cricket depends a lot on the top-order. In fact, during the IPL last year, the on-air commentators (Harsha Bhogle, in particular) stated that teams that lost three or more wickets in the powerplay go on to lose about 70-75% of the games. That stat simply underlines the importance of the top-order and especially, the openers.

It’s vital for the openers to set the tone. But given that aforementioned stat, can they afford to take it easy and play out the initial few overs? More often than not the answer is no unless you are someone like Chris Gayle who can just make it up as the innings progresses with the number of sixes he hits. What that stat does not tell you is that batting has gone to another level with the advent of T20 cricket and the scoreboard has to constantly tick over and move.

You take a look at the all-time T20 stats. You’ll see two out of the top three, four out of the top six leading run-getters are openers. They simply form one of the most important parts of any T20 side. That’s another thing that underlines the importance of openers getting runs in T20 cricket.

There might be a couple of kinds of openers in T20 cricket. One whose strike-rate is excellent and average isn’t something to be looked at. They score more boundaries than anyone else and more importantly at a frequent rate (better balls per boundary than others). Another one who’s consistent with both average and strike-rate.

However, who is the best one in recent times? Gayle has been consistent but there has been a dip. Consistency has become a big factor along with the impact. Let’s dig into a few stats and consider the last couple of years. Let’s consider stats from the start of 2017.

There’s no surprise to see Gayle leading the run charts as far as the openers are concerned. He’s played more T20 cricket than anybody else and has amassed 3478 runs in 121 games. Aaron Finch follows him closely with 3413 runs at the top of the order. But Finch has played 26 games lesser than Gayle. Shikhar Dhawan follows the Australian white-ball skipper with 2995 runs. There are the likes of D’Arcy Short and Alex Hales in the high 2000s while Evin Lewis, Babar Azam, KL Rahul and Colin Munro are hovering around the 2500-mark. 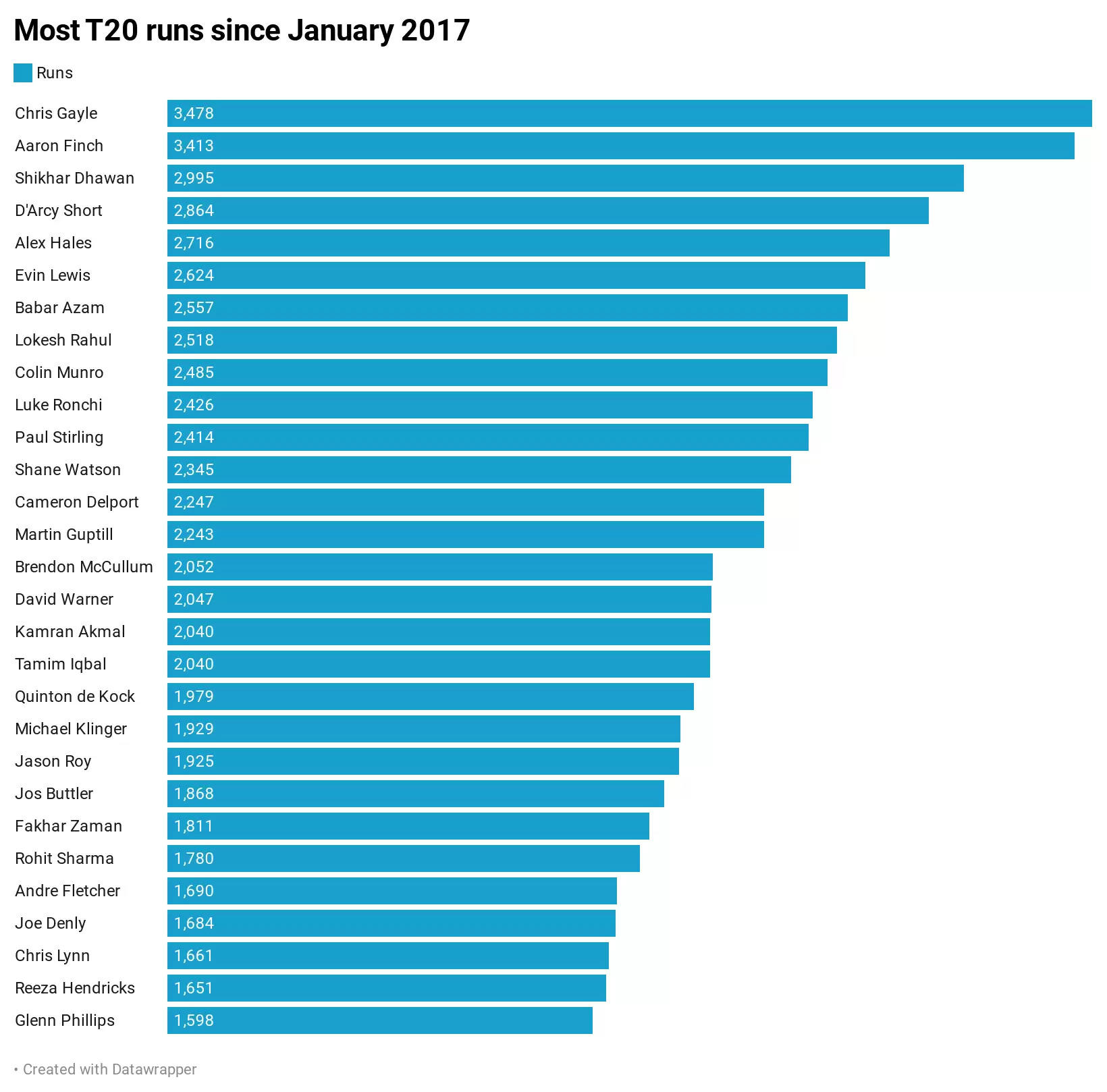 Talk about balls per boundary (BpB). Boundaries are a huge part of a T20 game and especially at the top of the order, in the powerplay. Sunil Narine is at the top of this list. He hits a boundary (four or six) in 3.69 balls and he has a strike-rate of 157.83. Ireland’s George Munsey has an excellent BpB as well – 3.87. Phil Salt, Tom Banton and Luke Ronchi are the only other ones under 4. But look at these players’ stats. They are more bashers at the top and have been assigned roles to go after the bowling. Their average won’t tell you their importance. Strike-rates and BpBs are the ones to look at for them.

The likes of Jos Buttler, Kevin O’Brien, Colin Munro and Aaron Finch are around four and a half while Gayle is at 4.7. Rahul hits a boundary once every five deliveries while Ishan Kishan is the best Indian in this list with 4.31 followed by Rohit Sharma at 4.77.

Devon Conway and Matthew Wade are the only ones in excess of 200 and are leading the table. Conway averages 56.41 and has a strike-rate of 144.86 while Wade has numbers of 44.25 as average and 155.95 as strike-rate. However, they have played just 21 and 26 innings respectively.

When you filter out to at least 30 innings, numbers are different. KL Rahul and Aaron Finch are the best in terms of BASRA. Both of them (Rahul – 199.59, Finch – 199.55) are almost neck and neck and in slightly contrasting styles. Rahul averages 51.39 and has a strike-rate of 148.2 while Finch strikes at 157.43 and averages 41.12. Rahul has played just 57 games while Finch has featured in 95 games. Both of them have the knack of getting big scores and batting for long periods of time in T20 cricket. Irrespective of it being T20 internationals or franchise cricket or domestic T20s, both Rahul and Finch have been gun players.

Jos Buttler started opening the batting only a couple of years ago and has had a great impact. He averages nearly 40 and has a strike-rate of 150+ opening the batting. Tom Banton has had quite an impact early in his career. David Warner has turned into a T20 beast and has been simply magnificent with his consistency. Not only is he scoring big runs, but the southpaw is also getting them at a quick rate as well. His BASRA stands at 189.86.

You would tend to ask about a few popular names like Rohit Sharma or Martin Guptill or Babar Azam. Rohit averages 31.23 and has a strike-rate of 143.09. While Guptill has similar numbers just that his strike-rate is 139.32. Azam has a BASRA of 178.77 where his average of 46.49 bring more value. Guptill’s opening partner Colin Munro was very consistent but in the last year or so, he’s fallen off the radar a bit. Munro who is one of the only three cricketers to score three or more T20I tons has a BASRA of 178.59.

Surprisingly, Virat Kohli’s numbers have fallen drastically and they that great either as an opener since January 2017. His BASRA is 171.24 where his average and strike-rate is in the mid-30s and mid-130s respectively. This is in stark contrast to his pre-2017 numbers as an opener where he averaged 57.46 and was striking at 143.28. Moreover, Kohli has scored just six half-centuries and one ton from 29 innings as an opener in this period of post-2017. 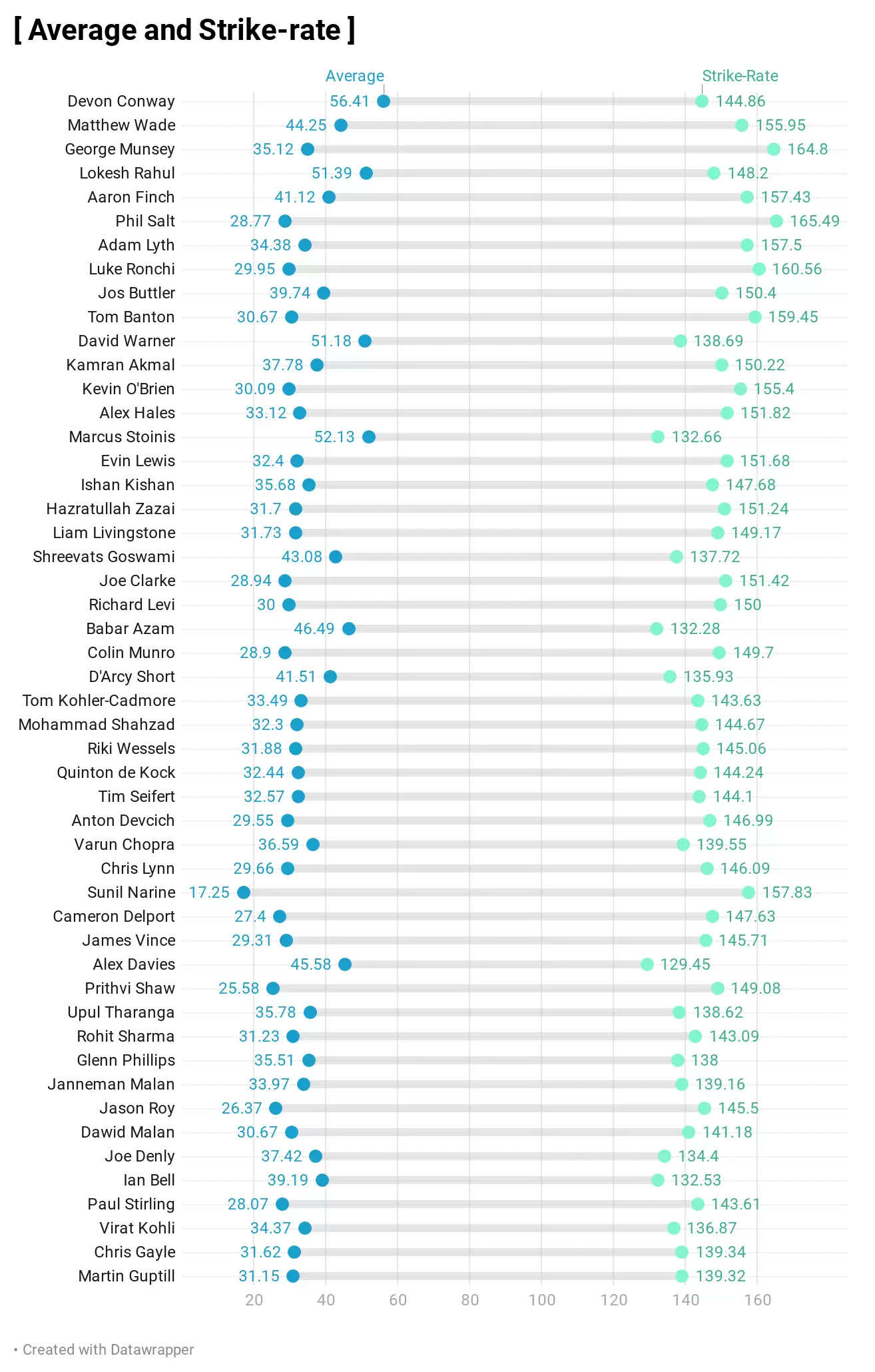 As far as fifties and hundreds are concerned, it’s once again Rahul and Finch leading the way. Finch has six tons and 20 half-centuries batting at the top of the order while Rahul has made 25 half-centuries to go with one ton at the same slot. Gayle joins them with 26 fifty-plus scores to be the joint-most holder of the 50+ scores record since 2017. Rahul once again gains the upper hand in this with the lesser number of games which underlines the consistency. The likes of Babar Azam and D’Arcy Short also have 23 and 24 fifty-plus scores in this period. David Warner, Shikhar Dhawan, Alex Hales and Evin Lewis – all of them have 20+ scores of 50 or more. Colin Munro has 19 while Jos Buttler and Kamran Akmal are in with 18 fifty-plus scores in just 50 and 57 innings respectively.

The likes of Devon Conway, George Munsey, Tom Banton, Hazratullah Zazai, Evin Lewis and a few others are making rapid strides in the shortest format. Their numbers are very promising and could well be the names that will be discussed in the coming years. Sunil Narine is another who has made quite an impact in T20 cricket. His average may not be great but his impact at the start of the innings is excellent as he gets boundaries frequently and has a very good strike-rate.

There’s a quite a surprise in the way Virat Kohli’s numbers have taken a hit and dropped considerably in T20 cricket, especially as an opener. Jos Buttler has been excellent, both internationally and domestically as well. In fact, he’s reinvented himself as an opener in the shortest format. David Warner’s numbers are brilliant as well and he’s become a T20 force. He can challenge the best in terms of consistency and impact.

Gayle has been there and thereabouts but the impact and consistency has certainly dropped. But for now, most numbers and stats lean towards two players largely – KL Rahul and Aaron Finch. Be it the number of runs scored, batting average, strike-rate, 50+ scores or even scoring boundaries, they are around the top of the chart.