Revisiting the best batting performances from India vs Pakistan games across the first 14 editions of the Asia Cup.
By Roshan Gede Thu, 25 Aug 2022 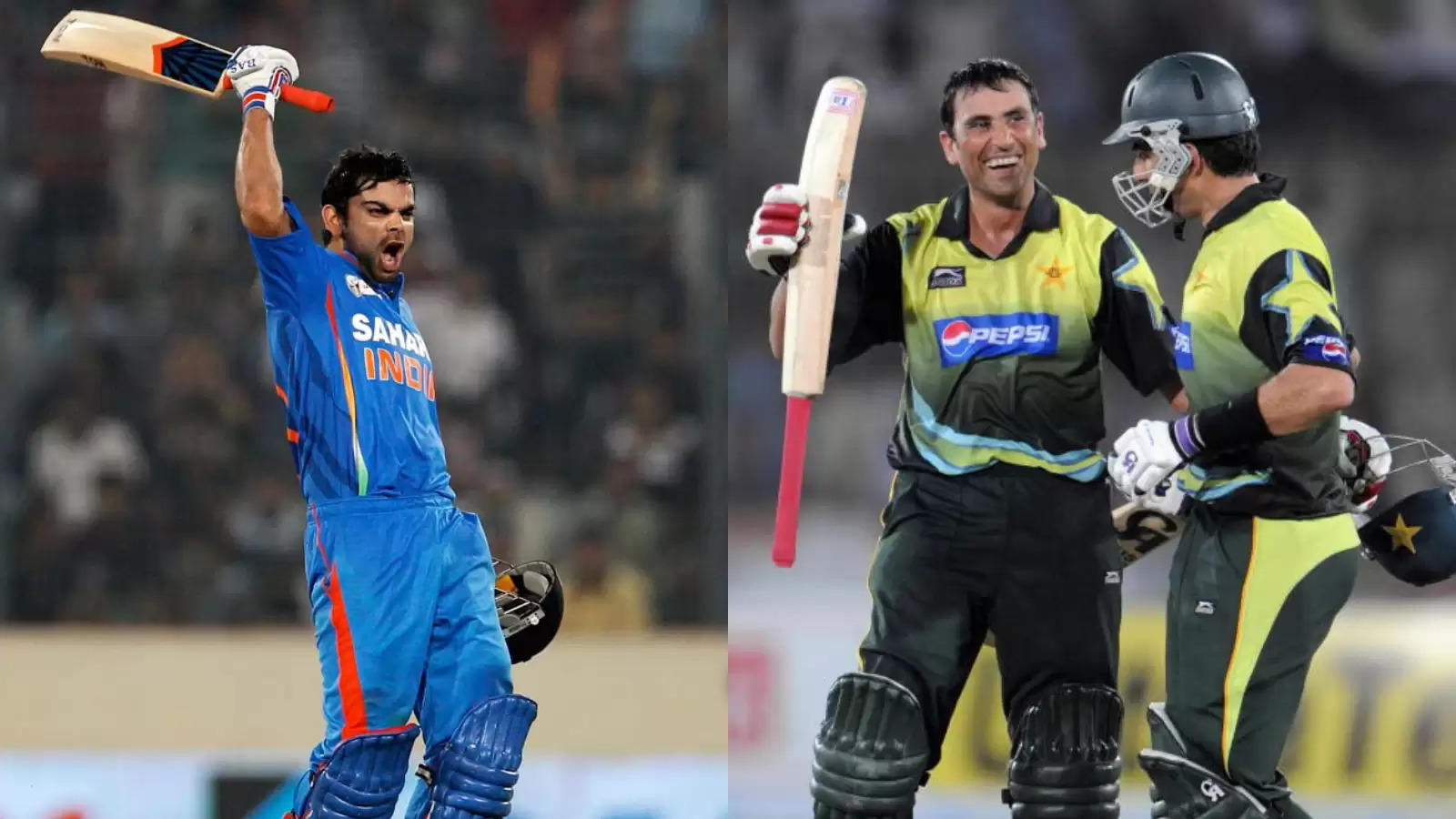 India and Pakistan will face off in the second game of the Asia Cup 2022 in Dubai on Saturday, August 25.

The India-Pakistan rivalry in the Asia Cup has been closely contested over the years, with the Men in Blue having won seven of the 13 contests while their arch-rivals took five, with one game ending without a result. Those games have produced some fine individual performances, laced with great class and pedigree.

From Virat Kohli’s chasing masterclass to Younis Khan at his classic best, here’s a look at the top batting performances in India vs Pakistan contests at the Asia Cup:

One of the earliest chapters of Virat Kohli - the ultimate chasemaster! Kohli had come into the Asia Cup 2012, after having been one of India’s standout performers on an otherwise disappointing Australia tour that preceded the competition. He’d already grabbed headlines and imaginations of the cricketing world, having struck a flawless 133* in an epic 321-run chase in 36.4 overs against Sri Lanka in Hobart about three weeks earlier.

Having walked in on just the third ball of the innings in a 330-run chase, Kohli struck a sublime 183, adding crucial stands worth 133 and 172 with Sachin Tendulkar (52) and Rohit Sharma (68) respectively. He struck 22 fours and a six, while running with a great sense of urgency through and through, before falling the final stages of India’s highest successful run-chase at the time. Over the next five years, Kohli would power India to three 350-plus successful run-chases with blistering hundreds in each, while establishing himself as one of white-ball greats.

Incidentally, the 2012 Asia Cup encounter happened to be Tendulkar’s last ODI appearance in a legendary career. Maybe, Kohli had just confirmed that the baton had been passed.

at the age of 24 kohli scored 183 vs Pakistan https://t.co/eRngYrryrg pic.twitter.com/mL7AalIr4C

Shoaib Malik relished batting against India, with nearly one-fourth of his ODI runs coming against the arch-rivals at an average of 46.89, with 11 fifties and four hundreds. In the 10th match of the 2004 Asia Cup encounter, the 22-year-old then registered what would be his highest ever ODI score - 143 in a team total of 300/7 wherein no other batter crossed 34. Malik walked in at the fall of Imran Nazir’s wicket in the first over, and struck 18 fours and a six by the time he was dismissed in the 46th.

Later that evening, Malik dismissed Sachin Tendulkar (78) and Yuvraj Singh (28) in a highly efficient spell of 10-0-42-2 to round off a memorable outing.

Malik’s 143 remains the second highest individual score for a Pakistan batter against India in ODIs, after Saeen Anwar’s landmark 194 in Chennai in 1997.

The 2008 Asia Cup and the preceding Kitply tri-series featuring Pakistan and Bangladesh marked Suresh Raina’s comeback to India’s ODI XI after a gap of 18 long months. Raina, on the back of his brilliance in Chennai Super Kings’ run to the final in the inaugural IPL edition, made the opportunity count, with 372 runs at 74.40 and a strike-rate of 110.38 in the Asia Cup, his tally only bettered by Sanath Jayasuriya.

Raina registered brisk hundreds against Hong Kong and Bangladesh, but his 84 in a 300-run chase was a standout. Raina walked in at the fall of Gautam Gambhir’s wicket, and gave the Pakistan attack a runaround, with Umar Gul having left the field early with an injury. Virender Sehwag stroked 119 and 95, but it was Raina’s 69-ball blitz that had got the chase underway, before the former would unleash. The left-hander’s collection of boundaries, 10 fours and three sixes made for a viewer’s delight in a 198-run stand that progressed at well over eight an over.

India completed their then quickest chase of 300 or more - in just 42.1 overs - and a 22-year-old Raina was on his way to establishing himself as one of country’s finest white-ball cricketers.

Much like Mailk, Younis Khan too, remained a scourge for Indian bowlers in his prime, more so in Tests with an aggregate of 1,321 at 88.07. He had his moments in ODIs too, with three hundreds in head-to-head contests.

After Sehwag and Raina made a mockery of a 300-run chase in Karachi a week earlier, Younis returned the favour with a classy unbeaten 123, which was glittered with 11 fours and a six. At no point did the right-hander appeared troubled, treating spin and pace with disdain, with Nasir Jamshed (redt hurt for 53) and Misbah-ul-Haq (70*) offering fine support. Pakistan chased 309 with eight wickets and 4.3 overs to spare.

Known more for his supreme fast-bowlings skills, and widely regarded as one of game’s greats, Wasim Akram was a proven game-changer with the bat too, as he showcased at various points in a two-decade-long career.

In the seventh game of the 1995 Asia Cup, Akram produced one of lower-order clinics to lay the foundation of a dominant Pakistan win. The famed opening pair of Aamer Sohail and Saeed Anwar had got Pakistan off to a fine start with a 58-run stand, but India bounced back strongly to make it 133/5. Walking in at No.7, Akram dominated in an 81-run stand with a 25-year-old Inzamam-ul-Haq, stringing four fours and two sixes in a 46-ball 50, that ended with a runout in the closing stages of the innings. Inzamam himself scored 88 off 100, but it was Akram’s innings that titled the game’s balance.

Pakistan put up 266/9, and Aquib Javed rattled India in the chase with 5/19 in a nine-over spell, to complete a comprehensive 97-run win.

The only T20I innings to make the cut, Kohli’s 49 off 51 in a run-chase of 84 in the 2016 Asia Cup clash in Mirpur doesn’t quite make an inspired reading on a first glance of the scorebook, but a deeper reading and memories of a fiery Mohammed Amir spell might just justify the call.

The left-arm quick had openers Rohit Sharma and Ajinkya Rahane trapped leg-before in just the first over of the chase, and Suresh Raina was bounced out in the third, leaving India at 8/3, promising to add spice to an otherwise low-scoring affair. Despite the extravagant movement, Kohli, in the midst of a purple patch at the time, was able to strike seven fours, unleashing trademark cover drives in between. The other notable contributors in the chase were the 14 extras and as many runs scored by Yuvraj Singh, who endured a 32-ball unbeaten scratchy stay at the crease.

India won the game by five wickets and were on course for the sixth of their seventh Asia Cup titles.

A Look at Memorable India vs Pakistan Asia Cup encounters