Some exciting player cards are up for grabs in Rario's upcoming CPL card drop.
By CX Staff Writer Thu, 1 Sep 2022 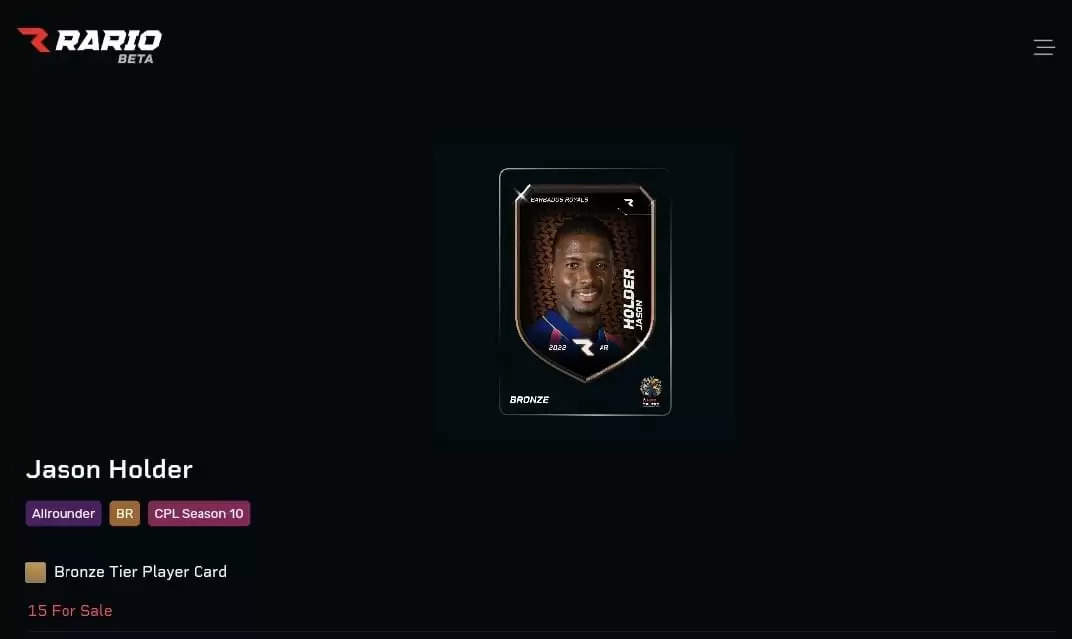 In this article, we take a look at the all-rounders to watch out for in Rario's latest CPL Player card drop:

Former West Indies skipper and one of the game's premier allrounders, Jason Holder, will turn out for Barbados Royals in the CPL 2022. Holder is part of the Black Pool of players. The tall right-arm seamer and handy middle-order batter has played 71 matches in his CPL career with 54 wickets at an economy rate of 7.42 and 796 runs at a strike-rate of 135.14. Holder will be entering the CPL 2022 determined to make his presence felt in both skills.

Set to play for defending champions St Kitts & Nevis Patriots, former West Indies allrounder Dwayne Bravo is also entering the list from the Black Pool of players. A highly experienced customer and one of the finest T20 players the game has seen, Bravo boasts of a highly impressive record in CPL history. He has picked up 114 wickets at 8.64 runs an over despite being an end-overs specialist and also smashed 1,110 runs at a strike-rate of 133.89.

Wiese has had a career-transformation since an international switch, playing for Namibia from last year after making a comeback to the top-level game. The former South African allrounder will turn out for the St Lucia Kings from the Black Pool of players. He has been an influential figure in leagues around the world, scoring 837 runs at a strike-rate of 139.26 in all T20s since last year while taking 54 wickets at 8.40 runs an over. At the T20 World Cup in UAE last year, Wiese was Namibia's stand-out player. He made 227 runs and bagged six wickets for his side.

Also part of the list from the Black Pool is the dangerous Andre Russell, who will represent the Trinbago Knight Riders in CPL 2022. Russell, hailed as one of the finest allround cricketers in contemporary T20 cricket, boasts of a superb record in CPL cricket. The West Indies allrounder has scored 1,491 runs at a strike-rate of 173.37 and taken 69 wickets with an economy rate of 8.65 in the league's history.

Young spin allrounder Fabian Allen is a handy powerhitter down the order and also a capable run-stopper with the ball. Allen is part of the Gold Pool of players and will be playing for the Jamaica Tallawahs. He has scored 764 runs in CPL cricket with a strike-rate of 162.32 and taken 14 wickets at 7.93 runs an over.

Entering the CPL 2022 with the desire to reinforce his allround presence is St Lucia Kings' experienced cricketer Roston Chase. Chase maybe yet to find his feet with the bat but has been a fine off-spinner in the shortest format. He has taken his 19 CPL wickets at an economy rate of 6.19. He is part of the Gold Pool.

The legendary Sunil Narine finds his name in the list from the Gold Pool of stars. Set to play for Knight Riders again, Narine will be hoping to add to his legacy. A match-winner with bat and ball, he has taken his 90 wickets in CPL history with an excellent economy rate of 5.32 and scored his 762 runs at a strike-rate of 133.91.

Allrounder on the rise, Mayers finds himself in the Silver Pool of players and will be playing for the Barbados Royals. An integral part of the West Indies set-up, Mayers has played 13 Tests, 17 ODIs and 16 T20Is at the international stage.

A dangerous powerhitter of the cricket ball and a handy sixth bowling option, Odean Smith is also part of the Silver Pool and will turn out for the Guyana Amazon Warriors. Smith has taken 55 wickets from his 50 T20 matches and scored 300 runs to his name down the order.

Part of the Silver Pool, Ireland white-ball great Paul Stirling enters the list as one of the most experienced cricketers at this year's CPL. He will play for the Guyana Amazon Warriors, having been in superlative form with bat in hand in T20s. Since the start of 2021, he has made 848 runs at a strike-rate of 138.78 at the top of the order.

An absolute giant of West Indies cricket, former limited-overs skipper Kieron Pollard is set to ply his trade again for the Trinbago Knight Riders in CPL 2022 from the Silver Pool of players. Pollard has been a legend of CPL cricket, with 2,227 runs at a strike-rate of 153.58 and 56 wickets at 7.82 runs an over.

Visit www.rario.com to know more about Cricket NFTs and the players on the platform.