Sheldon Cottrell and THAT six in the CPL

West Indies needed five off the final over against Mark Adair when Sheldon Cottrell produced a piece of magic
By Staff Writer Sat, 30 Jul 2022 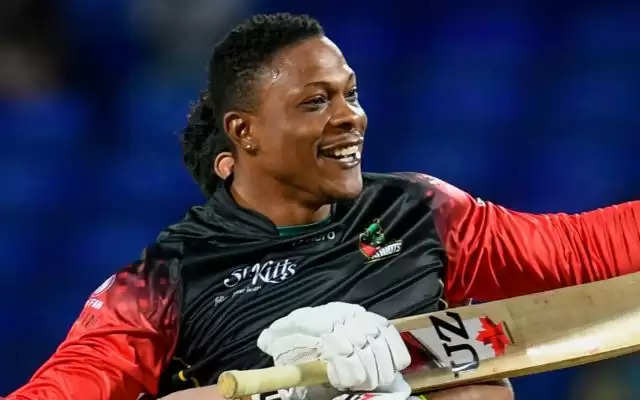 In a CPL 2021 encounter between the St Kitts and Nevis Patriots and Barbados Royals, Sheldon Cottrell struck a last-ball six to win his side the game in one of the league’s most epic finishes ever.

Sheldon Cottrell has arguably been one of neutral favourites among cricket fans in recent years, with his trademark salute celebration after every-wicket he bags with his left-arm pace hogging the limelight.

“Me saluting is just to show my respect to the Jamaica Defence Force,” he told the BBC back in 2019.

He’s been one of West Indies’ premier white-ball bowlers in recent years, and a much sought after quick in various global T20 leagues. While his brilliant athleticism in the field too, adds to his cricket credentials, Cottrell has produced magical moments with the bat more than once to seal a win for his side.

In a CPL 2021 encounter between the St Kitts and Nevis Patriots and Barbados Royals at the Warner Park, Basseterre, St Kitts, Cottrell struck a last-ball six off his West Indies teammate Ashley Nurse to power Patriots to a sensational win. Cottrell had walked in at No.9 following the wicket of skipper Dwayne Bravo, with his side needing 34 off 15 in a chase of 161.

He eased some nerves with a six and a four off the experienced Jason Holder in the 18th over, and another boundary from Dominic Drakes off the last ball brought it down to 10 required off the final over. Drakes struck another boundary after being handed over the strike, but was undone by Nurse’s wily off-breaks for the equation to come down to five required off 2.

Cottrell turned down an unlikely second on the penultimate ball to keep the strike, leaving four needed off 1. Nurse fired a full one around the off stump, and Cottrell swung at it with all his might to send it sailing into the long-off stands, to be mobbed around by his teammates later.

That wasn’t the first time though that Cottrell stepped up with the bat in hand. In the second West Indies-Ireland ODI played at the Kensington Oval, Bridgetown, Barbados, in January 2020, Cottrell, in at No.11 in company of No. 10 Hayden Walsh, struck a six to seal a thrilling one-wicket win for the hosts.

West Indies needed five off the final over against Mark Adair then, and the pair survived a couple of run-out chances, before Cottrell swung one over wide long-off against the right-arm quick to help his team win with a wicket and ball to spare.

Rario, the cricket NFT giant, has partnered with CPL to make available the best moments from the league for cricket fans. This Sheldon Cottrell moment can be picked as an NFT from Rario.

The new Rario packdrop is set for August 8. If you haven’t signed up yet, the time is now! Reservations begin on August 1.