The CPL Player card Drop 1 has 54 players in all, distinguished across three pools, the Black, Gold and Silver.
By CX Staff Writer Fri, 2 Sep 2022 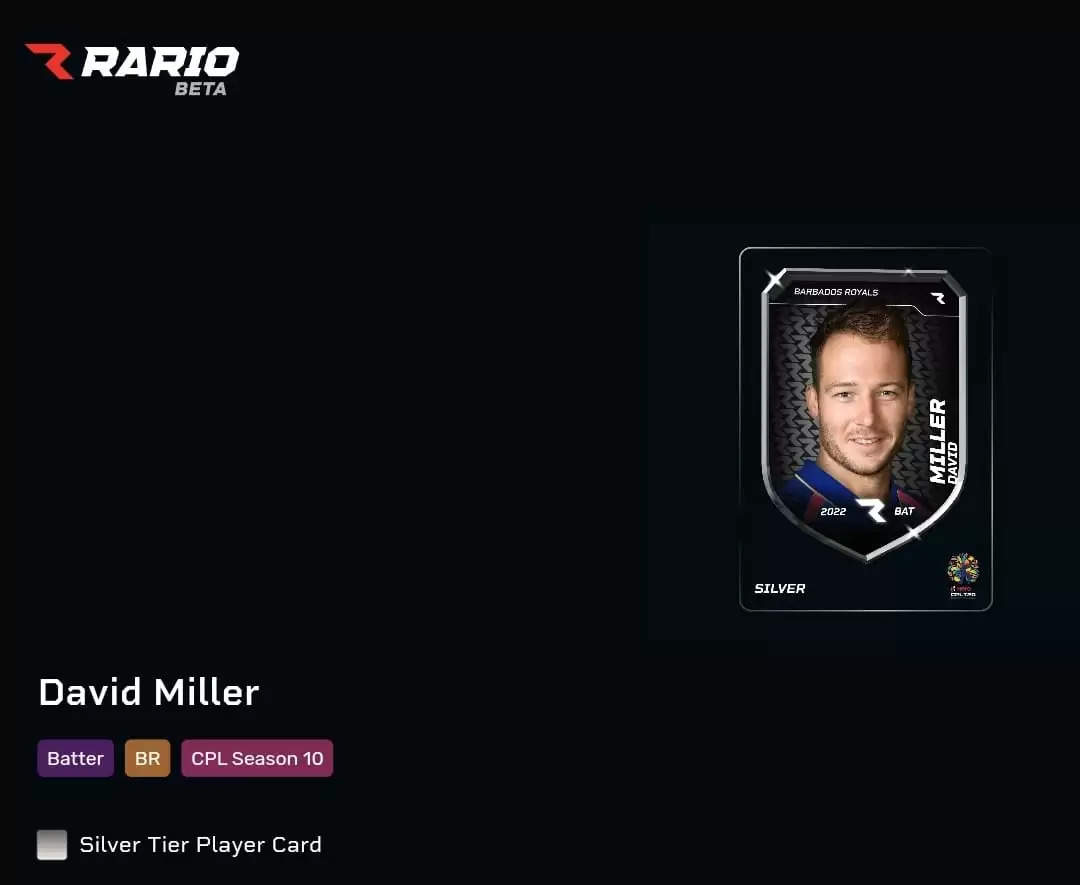 The Rario Moment NFTs helps cricket fans to owe their most cherished moments from the game. The Player Card NFTs helps users win handsome awards by participating in the novel Cricket Strategy Game.

The CPL Player card Drop 1 has 54 players in all, distinguished across three pools, the Black, Gold and Silver.

David Miller has been one of the most reliable batters in a finisher’s role for more than a decade, with numerous records to his name. Miller has aggregated 8,580 T20I runs till date at 35.75 and a strike-rate of 138.25, while having registered three hundreds. He holds the joint-record for the fastest hundred in T20Is, an innings that included five sixes in a row, making him one of the select players to have done so. Earlier this year, he played a starring role in Gujarat Titans’ maiden IPL triumph in just their first year of participation. An electrifying fielder, Miller has taken 72 field catches in T20Is till date, which is a record. He will lead the Barbados Royals at CPL 2022, having taken over from Jason Holder.

With his shrewd and accurate variations, potent to bamboozle the best of batters, Mujeeb Ur Rahman has been a premier match-winner for Afghanistan and various T20 leagues across the globe. Having made his international debut at just 176, back in 2017, Mujeeb has bagged 198 T20 wickets at 22.66 and an economy of 6.65. He enjoyed a breakout CPL in 2020, finishing the second-highest wicket-taker with 16 scalps at 13.56, while maintaining an impressive economy of 5.29 for the Jamaica Tallawahs.

Tim David has already established himself as a much sought after finisher in T20Is, with his brilliance in various leagues, most notably at the BBL and recently at the IPL and the T20 Blast in England. His T20I numbers for Singapore are highly impressive: 558 runs at 46.50 and a strike-rate of 158.52. He has been backed by many, including the great Ricky Ponting, to represent current T20 World Cup champions Australia in the upcoming edition at home.

Sunil Narine has been one of the top T20 cricketers ever, having added a free-flowing strokeplay to his armoury a few years back to go with his highly efficient mystery spin. Unsurprisingly, Narine is one of CPL legends, having scalped 90 wickets till date at 20.07 and an outstanding economy of 5.32. He has taken 463 wickets in all T20s - the third in all-time list - at a scarcely believable economy of 6.02.

The dynamic Kieron Pollard has to feature in this list. A clean ball-striker and a strong finisher, Pollard has been a part of various champion sides for over more than a decade now, having won 15 T20 titles as a player, a tally exceeded only by Dwayne Bravo. He has struck 785 sixes in all T20s, which is the second best after Chris Gayle. He can be resourceful with his gentle medium pace too, and is one of the best outfielders in the game even at 35.