Faf du Plessis: The veteran South African could have a great CPL

Given his stellar exploits with the bat the previous year, the Kings have rightfully kept Faf Du Plessis with them for the forthcoming edition of the CPL, where the now-freelance T20 batter will be determined to make his presence felt.
By Cricxtasy Media Mon, 25 Jul 2022 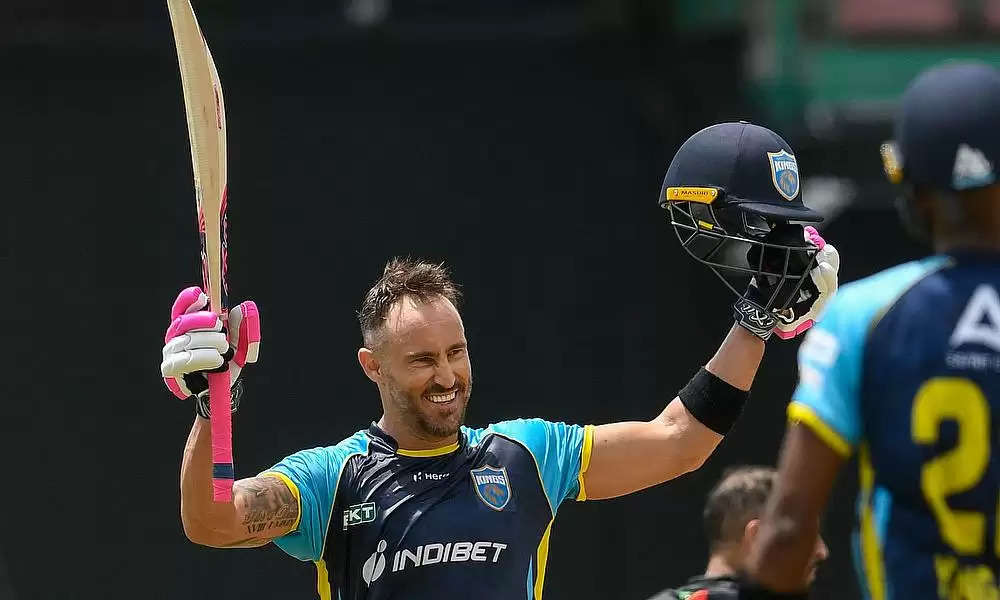 Continuing his fruitful association with St Lucia Kings at this year's edition of the Caribbean Premier League (CPL) is former South Africa captain Faf du Plessis. Du Plessis, whose presence brings a wealth of experience to the Kings' dressing room, had a strong campaign with bat in hand during CPL 2021.

The veteran right-hander made 277 runs in his nine innings of the tournament, averaging a healthy 34.62 with a fantastic strike-rate of 143.52. Du Plessis' CPL 2021 was glint with a superlative 120 not out against the St Kitts & Nevis Patriots.

Made off 60 deliveries, featuring 13 fours and 5 sixes, the St Lucia skipper's knock proved to be the highest individual score for the season, with only two other players - Chandrapaul Hemraj and Evin Lewis - scoring hundreds in CPL 2021.

Rario, the cricket NFT giant, has partnered with CPL to make available the best moments from the league for cricket fans. Some of Jayden Seales’ outstanding moments can be picked as NFTs from Rario.

As soon as Rario’s recent pack drop went live on July 15th at 8 PM, cricket fans just couldn’t keep calm! They rushed to own this exclusive drop that featured never-seen-before player cards of cricketers who are set to play in the upcoming Caribbean Premier League (CPL). The reservations had begun a bit early, so the pack drop was over-reserved and sold out in just 90 MINUTES!

Did you get a Faf du Plessis card in the pack drop on Rario?

Given his stellar exploits with the bat the previous year, the Kings have rightfully kept Du Plessis with them for the forthcoming edition of the CPL, where the now-freelance T20 batter will be determined to make his presence felt.

The 38-year-old is heading to the Caribbean after a reasonably good stint as skipper of Royal Challengers Bangalore (RCB) in IPL 2022. Featuring in his maiden season with the popular franchise, the opening batter struck 468 runs from his 16 innings at a strike-rate of 127.52, playing a role in their surge to the playoffs.

The influential campaign with RCB was Du Plessis' third successive 400+ runs season in the IPL, considered the toughest T20 league in the world. In his previous two years with four-time champions Chennai Super Kings (CSK), the stalwart collected 449 and 633 runs in IPL 2020 and 2021, respectively.

The latter of the two saw Du Plessis miss out on the Orange Cap by just two runs as he proved instrumental in CSK's inspiring return to hold the coveted crown after a disastrous league-stage exit the previous summer.

Strong contributions in the IPL are a testament to Du Plessis' longevity and overall quality and range as a batter even at the twilight phase of his career.

He would be hoping to continue in the same vein when he turns out for the Kings while they strive to shed their inconsistency and make a strong claim for the prestigious CPL trophy. As such, if you have a Faf du Plessis card for the upcoming Cricket Strategy Game on Rario, you have every right to feel elated.

Meanwhile, many of you who weren’t able to get your hands on this pack drop need not feel left out. You could still be a part of this game as Rario is coming up with many more pack drops in the upcoming days. Just keep an eye on Rario’s social media platforms (Twitter, Discord, Instagram), where we keep our community updated with all the latest happenings.

For more information about Rario and its upcoming game, visit: www.rario.com and www.medium.com/rario

Jayden Seales: The latest West Indian fast bowling sensation you should be excited about