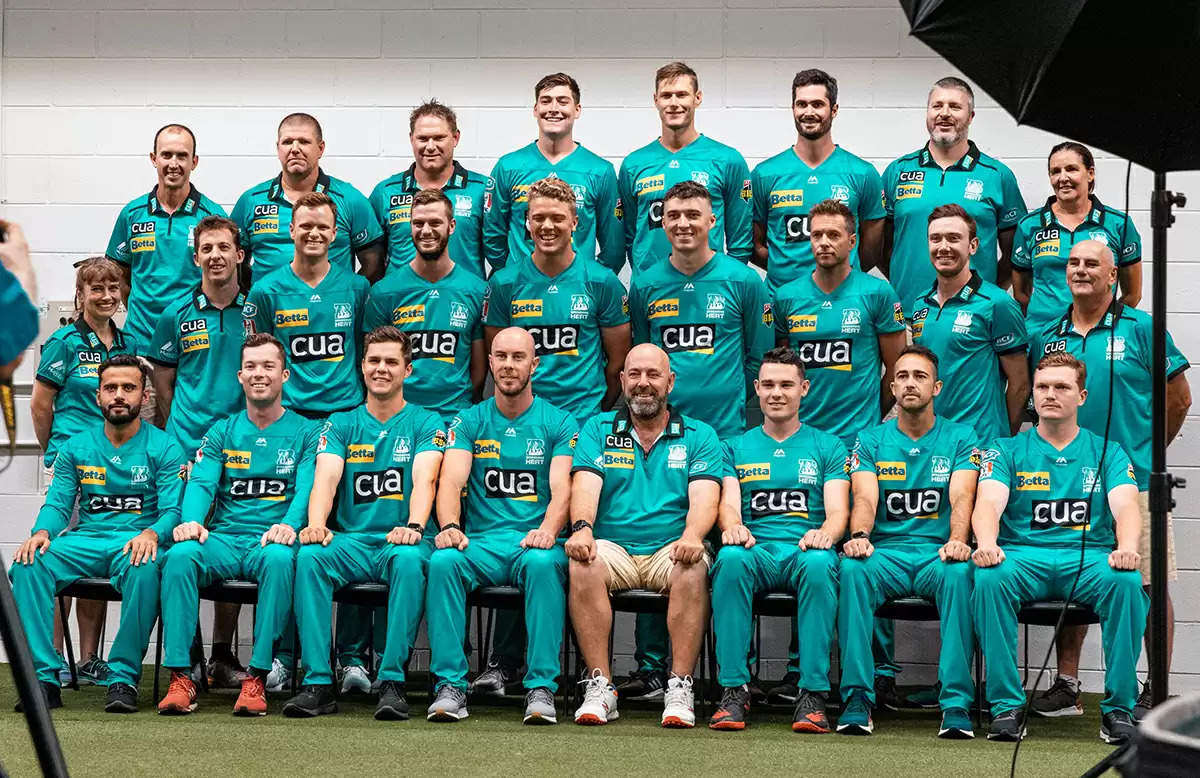 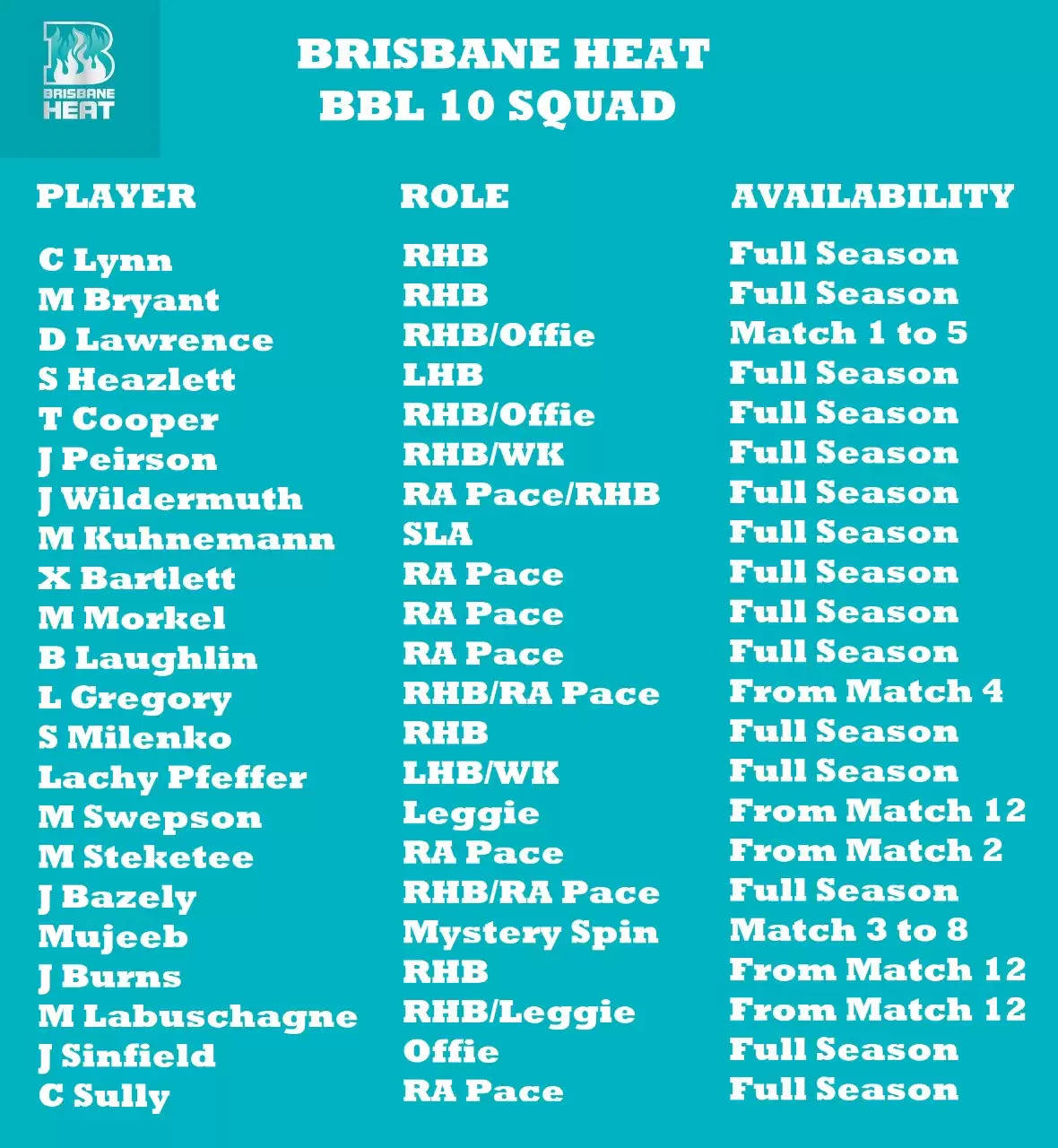 Brisbane Heat are the worst performers this year in terms of signings releasing the likes of B Cutting, M Renshaw, Josh Lalor, James Pattinson, Jack Prestwidge, C Gannon and Zahir Khan ahead of BBL 10. AB De Villiers and T Banton have expressed their disinterest in participating this season due to bio-bubble fatigue while Mujeeb ur Rahman’s entry is delayed after he tested positive for COVID-19. The signing of M Morkel as a local player was a great advantage especially with teams now allowed to play three overseas players in their eleven but Brisbane Heat just blew it off with their bizarre tactics. They have acquired the likes of L Gregory and D Lawrence as their new overseas players while T Cooper and J Wildermuth are their notable local signings.

Where’s the batting and bowling depth?

As discussed earlier, Brisbane Heat was awful with their signings which reflects in their squad. There’s literally zero batting or bowling depth in the squad and they’ve been forced to start with new players since M Morkel is recovering from a calf injury and M Steketee, M Swepson and Wildermuth would be reporting for national duty and the arrival of Mujeeb being delayed. The only positive from their squad is the presence of the powerful trio Lynn, Bryant and Lawrence at the top but the batting order lacks depth for them to play freely and express themselves. Brisbane Heat crashing out of the tournament this year is just a matter of when rather than how.

C Lynn – Lynn is a Big Bash superstar and in a recent voting conducted by cricket.com.au, he was adjudged the biggest hitter in BBL history. His form in CPL was sloppy but the conditions in the Caribbean weren’t really ideal for T20 cricket and he has thrashed any concerns over his form by scoring three hundreds in Premier cricket.

M Bryant – He’s the new gen cricketer from Australia who plays aggressive cricket and is isn’t afraid to take chances. These type of cricketers are volatile in nature but with the lack of batting depth he will tone down his aggression.

A career-high 71 (from 30 balls) for Max Bryant against the Stars.

Is this the man capable of replacing Brendon McCullum as Chris Lynn’s big-hitting sidekick?

D Lawrence – He’s got great potential and an all-round game against both pace and spin but his availability is only limited to the first five games.

J Wildermuth & M Steketee– They’re both useful bowlers who can chip in with a few overs while Sutherland can hit the long ball but both of them doesn’t possess great ability to rake in points consistently.

M Morkel – His hit the deck pace bowling style will definitely be effective in the Australian grounds with long boundaries but age is not on his side and he’s still recovering from a calf injury sustained earlier this year.

B Laughlin – Similar to Morkel, Laughlin finds himself at the wrong end of the 30s and his pace variations aren’t effective anymore which makes him a risky prospect.

Mujeeb-ur-Rahman– He has been tested positive for COVID which could delay his entry and even if he makes it in time he won’t be around for longer due to the Afghanistan vs Ireland series.

S Heazlett – The left arm batsman is all set to bat at No.4 this year and while he does struggle against spin, he’s a good differential due to the additional game-time and the lack of options in the Heat squad.

T Cooper – He’ll bat at No.5 for the Heat this season and similar to Heazlett, he will enjoy additional game-time and provides some off-spin value too.

M Swepson – If Cricket Australia releases the test players who aren’t in the playing eleven to play in the Big Bash like they did in the past seasons, Swepson might get some added game-time apart the last three games he’ll be part of.

The likes of M Kuhnemann, J Pierson and J Prestwidge will surely get their chances at some point in the tournament and are easier to acquire due to their credentials.