Prediction for BLR vs CSK Dream11 Contest - Playing XI, Injury Updates, Pitch Report and Weather report for the clash between Royal Challengers Bangalore vs Chennai Super Kings in Match 49 of the IPL 2022 season.
By Robin Sharma Wed, 4 May 2022 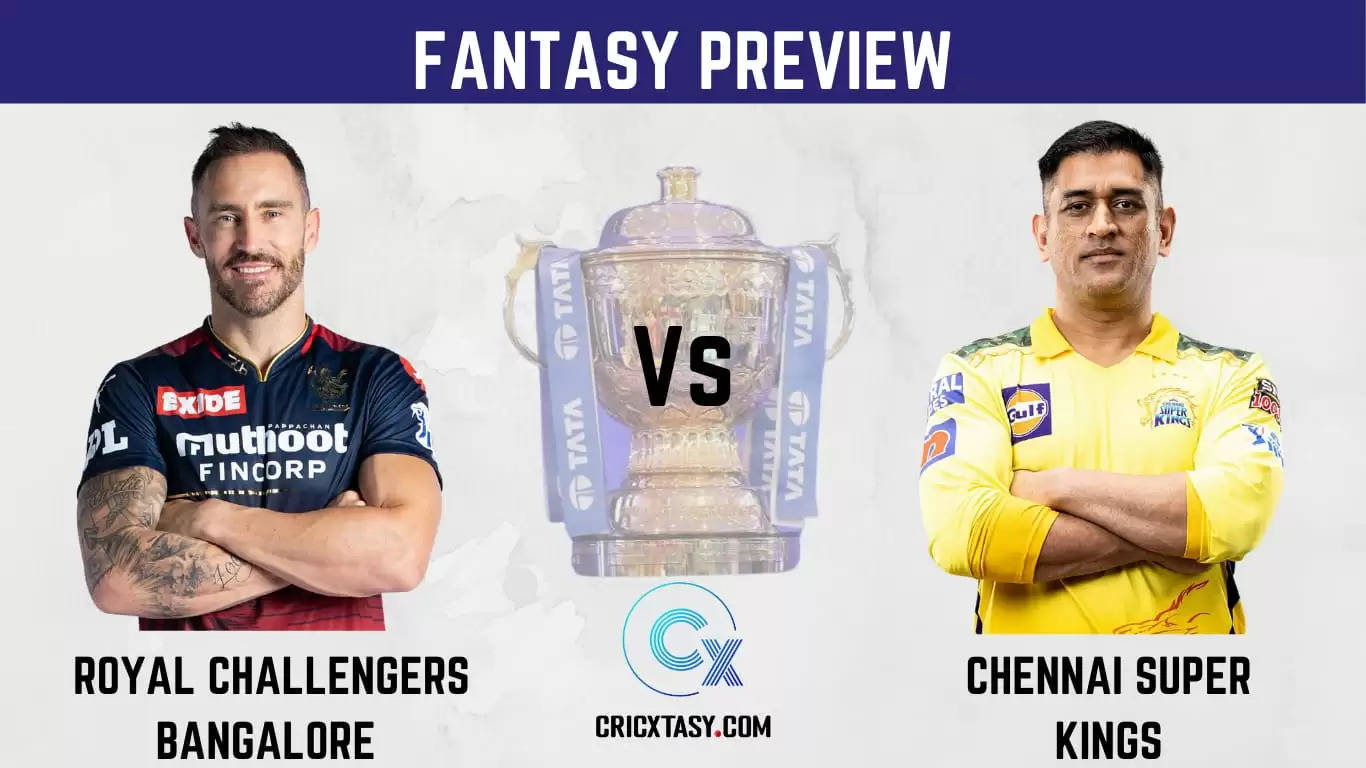 Royal Challengers Bangalore will take on the Chennai Super Kings in the 49th match of the Indian Premier League 2022. RCB are in the 5th position with 5 wins and 5 defeats in 10 games while CSK are at the 9th position with 3 wins in 9 matches.

Royal Challengers Bangalore are struggling at the moment and have lost 3 matches in a row. Their batting unit has been very inconsistent in the last few games. Faf du Plessis has been completely out of form in this season except 2 innings. Virat Kohli scored a fifty in the last game and that will be a positive for them. Glenn Maxwell is their main batter in the middle-order but he hasn’t been at his best. Rajat Patidar did well in the last game while Mahipal Lomror impressed everyone with his cameo. DInesh Karthik has failed after a great start in IPL 2022. RCB need their big players to take responsibility.

Their bowling attack is one of the best and a complete one in IPL 2022. Josh Hazlewood and Wanindu Hasaranga are the only consistent bowlers for them. Mohammad Siraj bowled well in one or two games but has struggled for form and has been very expensive. Harshal Patel has looked off-color in this season and has failed to pick wickets in the death overs which is a big blow to RCB. The bowlers need to be at their best in this game as they took a lot of beating in the first game against CSK in IPL 2022.

Chennai Super Kings, meanwhile, finally came back on the winning track in the last game as they defeated the Sunrisers Hyderabad by 13 runs in their last game. Ruturaj Gaikwad finally looked in form and got out after scoring a brilliant 99! Devon Conway who played his second IPL game, did really well and scored 85* runs. Openers being back in form is a big plus for CSK and they'll expect them to continue their good form for the rest of the season. Ambati Rayudu and Robin Uthappa have been in good form while MS Dhoni has shown glimpses of his former self in this season. Ravindra Jadeja’s form is a concern for them but he is expected to do well after being relieved from the captaincy duties. Moeen Ali’s injury has been a big blow to their batting. CSK did an excellent job with the bat in the last game and will be eyeing a similar performance in this game as well.

Bowling is the weak link for CSK but the bowlers did a good job in the last game. Mukesh Choudhry picked his second 4-for of this season and has been doing well in the power play. Maheesh Theekshana has bowled well as their lead spinner, he picked 4 wickets against RCB when these two sides met earlier. Dwaine Pretorius too bowled well while Ravindra Jadeja was in good rhythm in the last game. Mitchell Santner was expensive in the last game but he is a wicket-taker and an important bowler for CSK. CSK bowlers will look to continue their good performance in this game as well.

The last game played here at the MCA Stadium was very high scoring. CSK scored 202 runs and SRH too scored 189. Despite that, the players said that the ball was gripping a little bit in that game. The pitch is expected to be the same for this game as well. Batters will love batting on this pitch but there will be assistance for the spinners as well. The Pacers will get good swing and seam movement with the new ball. The average first innings score is 173. Teams batting first have won 6 out of 9 games played here in IPL 2022.

It will be an even contest between the two teams. CSK has already defeated RCB once in IPL 2022 and will beat them again in this game.

No Changes are expected in the RCB line-up.

Moeen Ali is expected to be out for this game as well. DJ Bravo, if fit, will replace Mitchell Santner and Shivam Dube will replace Simarjeet in that case. 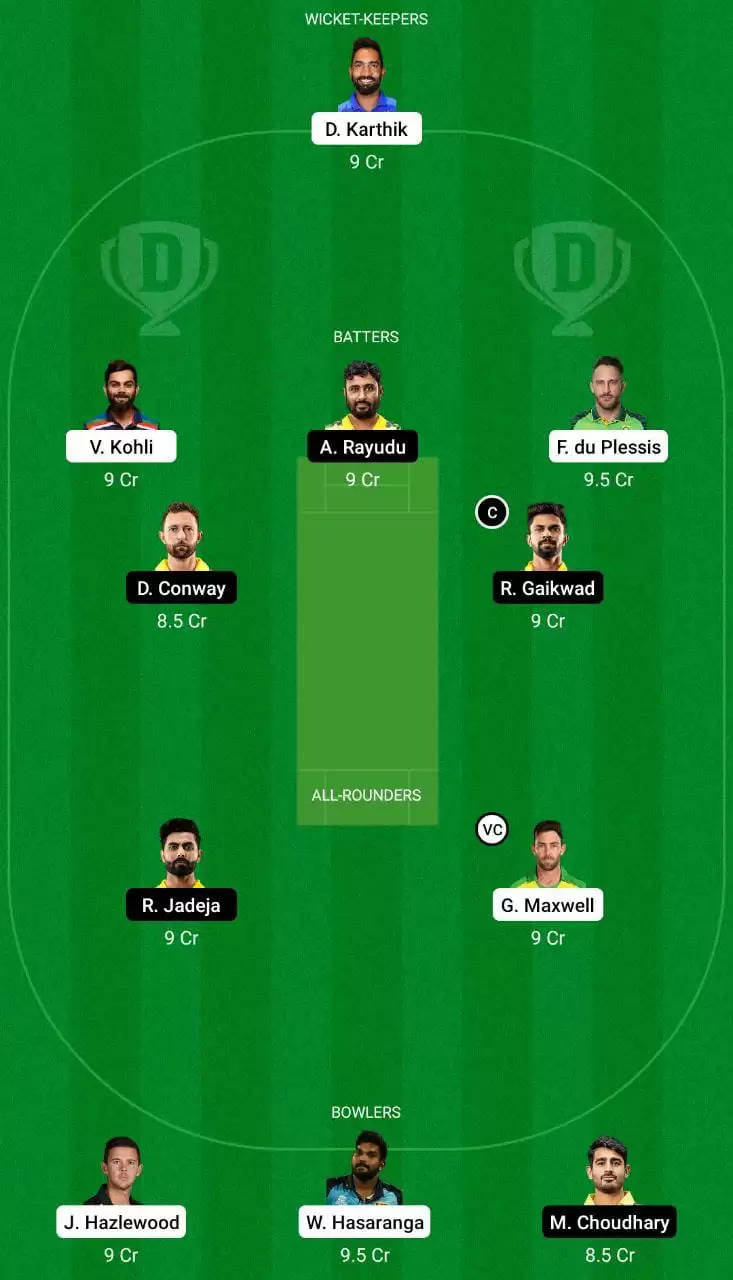 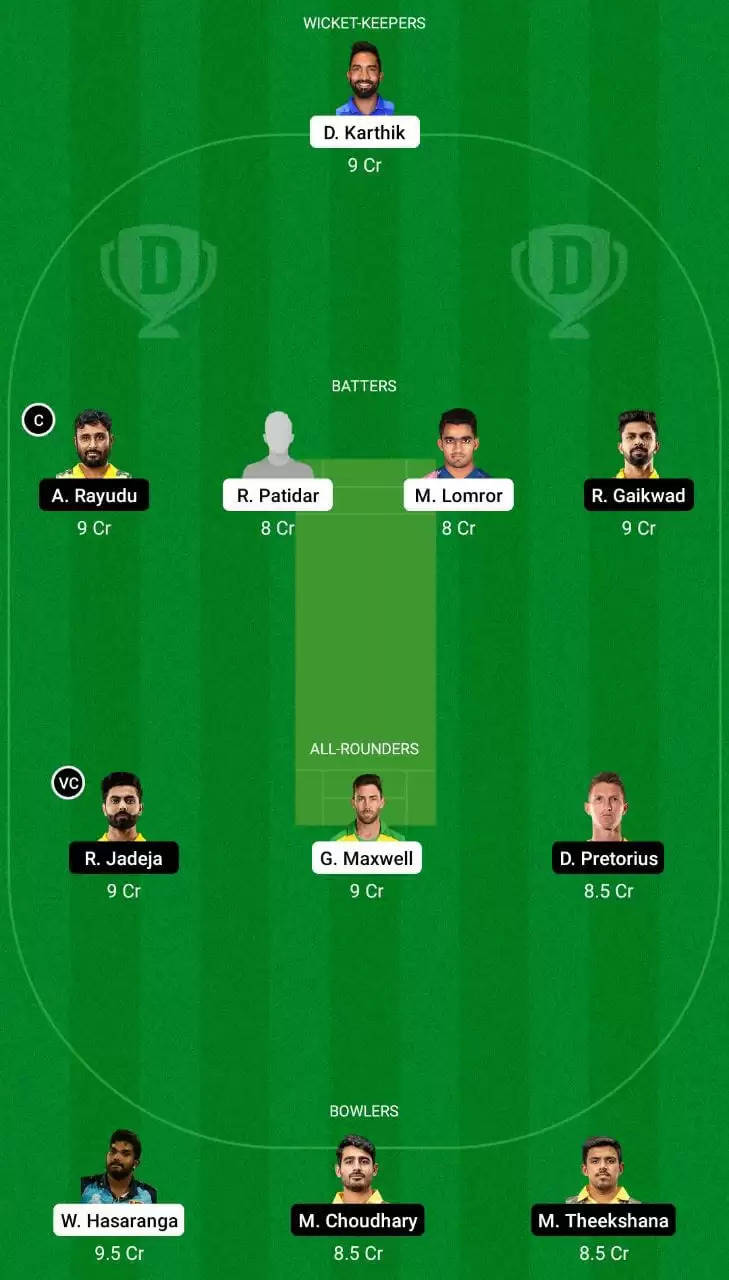 Which Contests to Join for BLR vs CSK Dream11 Match