Two of the best teams from the Caribbean Premier League will face off each other in the Qualifier 1 of this edition of the tournament. The winner from this match would directly proceed to the finals of the tournament whilst the defeated team would attain another opportunity in the Eliminator 2. Astonishingly, the Warriors won […]
By Tarkesh Jha Sun, 6 Oct 2019 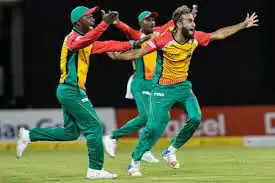 Two of the best teams from the Caribbean Premier League will face off each other in the Qualifier 1 of this edition of the tournament. The winner from this match would directly proceed to the finals of the tournament whilst the defeated team would attain another opportunity in the Eliminator 2. Astonishingly, the Warriors won all of their ten matches in the tournament, and finished atop the points table. The difference in the class and performance between them and the Barbados Tridents is so vast that the latter ended up with ten points, so much adrift than Shoaib Malik’s side.

Partly cloudy weather but with merely 6% chances of rain and the temperature ranging around 29 degrees Celsius is expected during the course of the game.

The tournament has generally been high-scoring and hence one can expect fresh tracks to be dished out so that the audience witnesses yet another entertaining encounter towards the end of the competition.

As always, the major strength of the Warriors is constituted in their middle order with the presence of the likes of Shimron Hetmyer, Nicholas Pooran, Shoaib Malik and Sherfane Rutherford. Keemo Paul and Imran Tahir add further quality to the lineup later on.

Alex Hales would be banked upon to provide a good start to the innings at the top whilst the southpaw duo of Shakib al Hasan and JP Dumminy would be tasked with maintaining a brisk scoring rate and accelerate it as the game progresses. Jason Holder and Harry Gurney would be the key bowlers for the Tridents.

Nicolas Pooran scored 54 runs in his side’s previous match against the TKK, and his natural talent coupled with his prominence in the T20 format of the game ensures that he is safe pick in this particular match. More importantly, Imran Tahir notched three wickets and earned a considerable number of points on a personal basis in the fantasy cricket as well. He is a veteran in dealing with such high-pressure matches, and given the quality and experience that he possesses, Tahir would advisably be a must-pick for this match. Johnson Charles scored 53 runs as well, and he along with Pooran can add a notable number of points as Charles tends to play more number of deliveries whilst opening the batting too. Shakib al Hasan is someone who can earn points from his mastery over both primary skills of the game, and hence he should also walk his way into this XI.