Hong Kong and Uganda will be up against each other in match number 20th of CWC Champions league. Action will take place at Kyambogo Cricket Ground, Kampala.

Uganda is on top of the points table with 5 wins in 6 matches. Their only defeat came in their last match which they played against Jersey two days back. They failed to chase the target of 256 and got bundled out for 193. Bowlers contributed collectively to restrict Jersey at 255 but batters failed to chase it. They would like to make a comeback in this match and get back to winning ways.

Hong Kong are at number two position in the points table in Group B. They have won four games out of 6 games and have lost one. One game yielded no result as rain played spoilsport.  They won their last game against Italy with a huge margin of 58 runs. Batting first Hong Kong scored 283 in 50 overs which their bowlers defended successfully. They bundled out Italy for 225 in 45th over. Aizaz Khan picked 3 wickets while Ghazanfar and Ehsan picked two wickets each. They have started this leg of Champions League on a winning note and they would like to continue it.

The match will be played at the Kyambogo Cricket Ground in Kampala.. Here, Seamers can get enough assistance from the wicket early in the innings If they pitch it in right areas. The ball comes on to bat nicely once the batter is set and scoring is easy.

The last time these two teams played against each other Uganda were all over Hong Kong. Hong Kong got all out for just 147 which Uganda chased easily. Both the teams are top two teams in Group B and a close contest can be expected.

K Shah: Hong Kong skipper Kinchit Shah scored an excellent century in last game and scored 102 off just 97 balls. He was looking in excellent touch and would look to carry on his good form.

Aizaz Khan : Aizaz Khan is a top all rounder. He bats in lower middle order and can also bowl with the new ball. He scored 75 runs in the last match against Italy and also picked three wickets. He is an excellent captaincy choice.

Simon Ssesazi : Simon is an attacking opener. He scored a 41-ball half-century in last match when no other Uganda batter looked in touch. He would like to back his performance with another good show.

Mohammad Ghazanfar:  Ghazanfar picked two wickets in last match and bowled with an economy of less than 6. He is in good rhythm with the ball and would like to give another match-winning performance.

Ronak Patel: Ronak scored 64 runs in last match. He is batting at number 3 position and is backing his performances with good scores. He would look to score big once again.

Babar Hayat: Babar can be a good differential pick in this match. He is an experienced campaigner with 22 matches experiences. He averages 39.20 with the bat in 22 matches played. 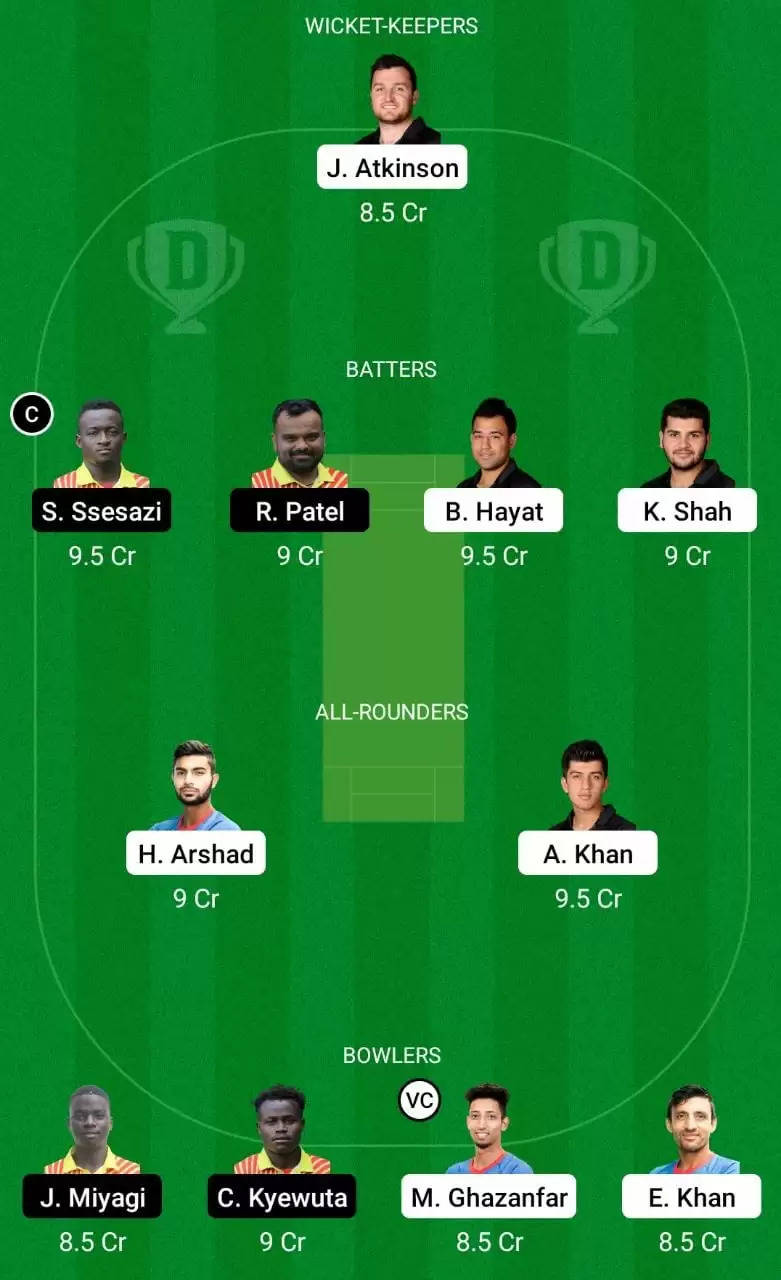 Which Contests to Join for HK vs UGA Dream11 Match

Joining small league contests of upto 8 members are recommended from the small/head-to-head league team. Join Mega contest and all the other contests with a big prize pool with the mega league team.