Elite Groups A and B are merged together in the points table of the current ongoing edition of the Vijay Hazare Trophy. Both Delhi and Baroda are at very peculiar positions in the points table at this point in time. Delhi have had both of their scheduled matches yield no results and hence have secured […]
By Tarkesh Jha Thu, 3 Oct 2019 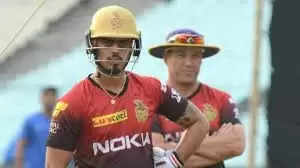 Elite Groups A and B are merged together in the points table of the current ongoing edition of the Vijay Hazare Trophy. Both Delhi and Baroda are at very peculiar positions in the points table at this point in time. Delhi have had both of their scheduled matches yield no results and hence have secured two points from each to earn four of them so far. Baroda, in an ever more strange situations, have had all three of their games failed to evoke a result and hence have bagged six points so far. Both these teams would wish they they at least notch a victory to kick off their campaign properly in tomorrow’s scheduled match.

Interestingly, completely sunny weather with around 10% of possible chances of rain and the temperature ranging around 31 degrees Celsius is expected during the course of this encounter.

Not many matches have taken place in this pitch so far, and hence it would be rather difficult to give a clear assessment of the same with very little evidence in hand.

Dhruv Shorey and Shikhar Dhawan along with Nitish Rana will form the core of the batting order at the top. The likes of Pawan Negi and Kulwant Khejroliya and Navdeep Saini will have a major impact upon the game, with Negi’s dual skills possibly coming in handy for the side in the lower-middle order.

Deepak Hooda, Krunal Pandya and Yusuf Pathan constitute a very formidable middle-order that can set and alter the pace of the game quite intelligently in the middle stages of the game. Rishi Arothe and Lukman Meriwala would be the key bowlers for the team.

Navdeep Saini has taken immense strides in his career with his introduction to the international circuit and an overall improvement as a pace bowler. He scalped 16 wickets from eight games in the previous edition of the tournament and is a bankable pick amongst the lot of bowlers at disposal over here. Nitish Rana scored 375 runs last season in the Vijay Hazare Trophy, has been an overall impressive batsman in the domestic circuit and even played for the India A side when they South Africa A unit visited the country last month. Dhruv Shorey has showcased his talents to a great extent in the past year or so and henceforth his inclusion could be beneficial to the Dream XI unit too. Krunal Pandya is yet another player who can carve out a massive impact, with his growing stature in the Indian T20I side being a reason behind his improvement in confidence and overall form. The older Pandya brother was the Man of the Series in the T20I series during India’s recent tour to West Indies.