In a Round 7 clash in the Vijay Hazare Trophy 2019, Bengal and Rajasthan are pitted against each other on Thursday. Both teams have slightly been off the mark in terms of their performance. While Bengal has won two and lost two games so far, Rajasthan has critically underwhelmed with no wins out of three […]
By Dwijesh Reddy Wed, 2 Oct 2019 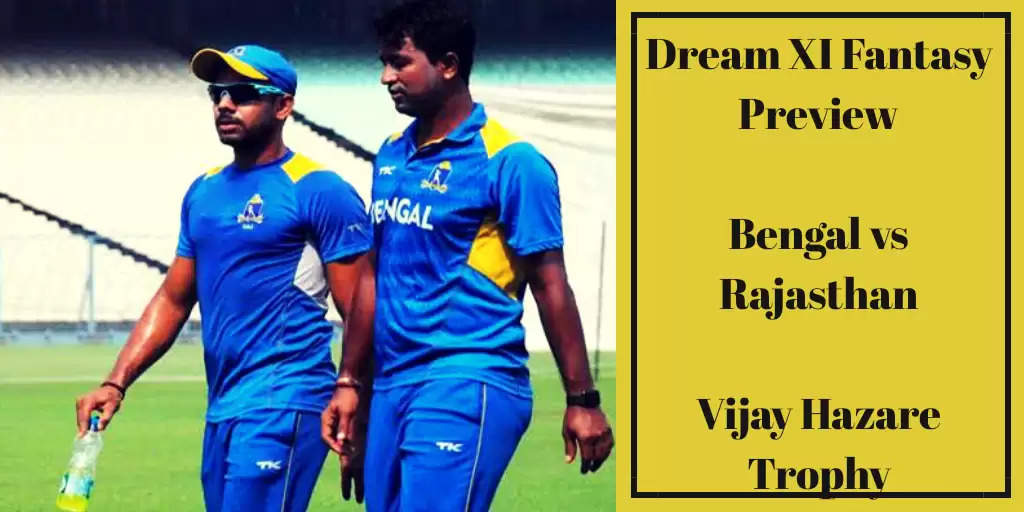 In a Round 7 clash in the Vijay Hazare Trophy 2019, Bengal and Rajasthan are pitted against each other on Thursday. Both teams have slightly been off the mark in terms of their performance. While Bengal has won two and lost two games so far, Rajasthan has critically underwhelmed with no wins out of three games. In spite of boasting two very talented quicks in Khaleel Ahmed and Deepak Chahar, the Rajasthan batsmen haven’t been up to the mark. On the other hand, Bengal looks to bounce back from a tough loss to Tamil Nadu and reinstate itself as one of the top contenders in the group.

Mostly sunny weather with no chances of rain and the temperature ranging around 25 degrees Celsius is expected during the course of the game.

The previous encounter saw the Gujarat pacers rattle the Rajasthan batting unit with quality swing bowling. It shouldn’t be different on Thursday with scores of 230 and above being highly competitive at the Sawai Mansingh Stadium.

Bengal shouldn’t be making many changes to the side in spite of suffering a huge defeat against Tamil Nadu. They will bank on their captain, Abhimanyu Easwaran and Manoj Tiwary to man the batting unit while their bowlers have done reasonably well. Ishan Porel picked a seven wicket haul against Jammu and Kashmir and is one to watch out for in this game.
Abhimanyu Easwaran, Shreevats Goswami, Abhishek Raman, Manoj Tiwary, Sudip Chatterjee, Anustup Majumdar, Shahbaz Ahmed, Arnab Nandi, Akash Deep, Ashoke Dinda and Ishan Porel.

Rajasthan capitulated against the Gujarat bowlers and will be expected to make a couple of tweaks in their side. Rajesh Bishnoi and Abhimanyu Lamba could return at the expense of Arjit Gupta and Manender Singh. Their bowling unit is expected to come up with better performances if they are to compete with Bengal on Thursday.
Abhimanyu Lamba, Rajesh Bishnoi, Chetan Bist, Mahipal Lomror, Ashok Menaria, Salman Khan, Deepak Chahar, Rahul Chahar, Tajinder Singh, Khaleel Ahmed and Aniket Choudhary

Manoj Tiwary has been consistently picking wickets and scoring runs for Bengal over the last two seasons. Along with Mahipal Lomror, he is a must have in the side. Ishan Porel, who picked a seven-fer earlier in the week is also picked along with Shahbaz Ahmed, who scored a rearguard hundred against Tamil Nadu. Abhimanyu Easwaran and Ashok Menaria are solid options as well while India internationals, Khaleel Ahmed and Deepak Chahar round the team off with their ability to pick wickets with the new ball bound to earn a few fantasy points.
Captaincy Options: