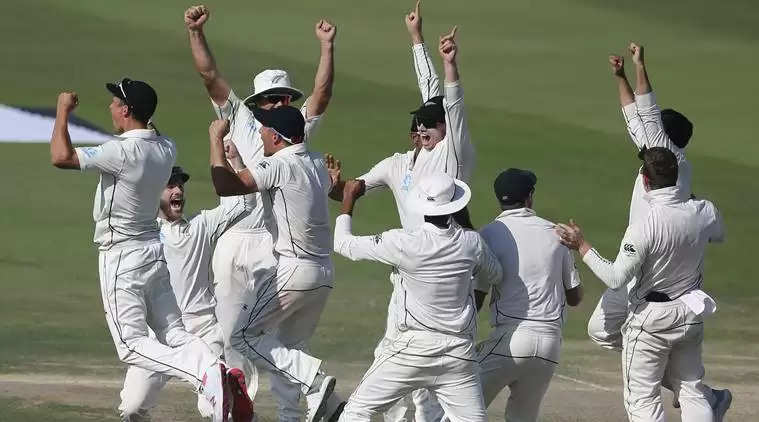 However, in recent times, despite games not going into the final day, there have been some real nail-biters. With a few close games recently played out, it’s time to look back at some of the closest results (by runs) in Test cricket history. But the question is do any of the recent games feature in this compilation? Let’s find out and look at the top 7.

This is the most recent one. In the first Test of the three-match series, New Zealand squandered the advantage of winning the toss as they were bundled out for 153 on the first day. Skipper Kane Williamson top-scored with 63 and no other batsman went past the 30-run mark.

However, a spirited effort from the Kiwi bowlers kept Pakistan’s lead down to 74 as the hosts were bowled out for 227. Pakistan had to bat last and everybody knows they don’t have a great history of chasing down totals. Hence, the Kiwis were in the game. Fifties from BJ Watling and Henry Nicholls put them in good stead. But fifers from Yasir Shah and Hasan Ali turned the game as Pakistan got a target of 176.

After some early hiccups, the Sarfraz Ahmed-led side were coasting along nicely with 7 wickets in hand and under 50 to get. However, things changed dramatically as debutant Ajaz Patel and Neil Wagner ran through the middle and lower order. There was lots of drama as Azhar Ali was still batting and he kept the scoreboard moving. However, the debutant held his nerve to give New Zealand a memorable 4-run win.

Heading into the fourth Test of the 1982-83 Ashes, Australia were 2-0 up. Australia won the toss and opted to field first in the Boxing Day Test. However, both England (284) and Australia (287) ended up with almost identical scores in the first innings with Australia sneaking a 3-run lead.

In their second innings, England once again got a similar score (294) and set the Aussies a target of 292. In the chase, the Aussies looked down and out at one stage at 218/9. However, Allan Border fought valiantly alongside Jeff Thompson as they put England under some pressure. However, Ian Botham got the wicket of Thompson to seal a superb 3-run win. It helped England pull one back after they lost two out of the first three games.

This was way back in 1902 and it was Test match number 73. Victor Trumper’s ton propelled Australia to 299 after Bill Lockwood picked up a six-fer. Stanley Jackson’s 128 helped England get to 262 after a top-order collapse (44/5).

Jackson’s ton rejuvenated the English side as they came out all guns blazing, bowling the Aussies out for a mere 86. Bill Lockwood was the star performer again as he picked up another five-wicket haul. Chasing 124, England got off to a decent start as the first two wickets knocked off 68 runs. However, a stunning collapse saw England lose the game by 3 runs as they were bowled out for 120. Hugh Trumble (6/53) and Jack Saunders (4/52) shared all wickets to give Australia a 2-0 lead after this Test.

This is one game that has been termed as one of the best Ashes ever. In the second Test of the famous 2005 Ashes series, Marcus Trescothick, Andrew Flintoff and Kevin Pietersen struck fifties as England made 407 batting first.

After fifties from Justin Langer and Ricky Ponting, Australia’s middle and lower order crumbled as they conceded a 99-run lead. But an inspired performance from Brett Lee (4/82) and Shane Warne (6/46) helped the Aussies keep England down to 182 in their second innings.

Chasing 282 to take a 2-0 lead in the series, Australia were reduced to 137/7 but Warne, Lee and Michael Kasprowicz fought valiantly. The former two struck 40s. When Warne fell, the score read 220 and the game seemed dead and buried. But Lee kept the fight alive as along with Kasprowicz he took the Aussies very close. However, Flintoff dismissed the latter to give England a memorable 2-run win and they levelled the series (1-1).

Australia and West Indies have played a few thrilling Test matches in the 20th century. One of them was this and it created the record for the lowest margin of victory by runs.

Windies batted first and scored 252. Only Brain Lara scored a half-century as most of the other batsmen failed. Merv Hughes picked up a fifer while the other bowlers chipped in as well. Sir Curtly Ambrose’s inspiring performance (6/74) restricted Australia to 213. However, despite Richard Richardson’s 72 Windies could just manage 146, setting Australia a target of 186.

Australia were in dire straits during their chase as they were reduced to 102/8 at one stage. However, Justin Langer’s 72 took them a little closer. But after his dismissal, it was Tim May who battled hard and took Australia within touching distance before Craig McDermott was dismissed by Courtney Walsh and Windies won by 1 run.

This was the first ever tied Test in the history of Test cricket. If you think it was a low-scoring affair then you are wrong. The first innings scores were in excess of 450.

West Indies batted first and scored 453. Sir Garry Sobers struck an excellent hundred. Norm O’Neill’s stunning 181 helped the Aussies take a 52-run lead as each of their top 8 batsmen got into double digits.

West Indies scored 284 in the second innings. Aussie left-arm pacer Alan Davidson backed up his first innings fifer with 6/87 while Kanhai and Worrell struck fifties for the Windies.

Chasing 233, the Aussies slipped to 92/6 before Alan Davidson and Richie Benaud put up an excellent seventh wicket partnership. The duo added 134 runs as they got Australia within touching distance. When the former was dismissed, Australia needed just 7. However, a dramatic turn of events helped Windies tie the Test match and create history.

In the first Test of Australia’s tour of India in 1986, Dean Jones’ 210 and hundreds from David Boon and Allan Border propelled Australia to a mammoth score of 574.

After a top-order wobble, skipper Kapil Dev’s sublime ton helped India avoid follow-on as they conceded a huge lead of 177. Australia batted again but they declared their innings at 170/5.

Chasing 348, India got a solid start and Sunil Gavaskar’s 90 set the platform. They were 250/3 at one stage and were threatening to pull the chase off. However, wickets at regular intervals pegged them back as Ravi Shastri kept the scoreboard ticking from his end. But the lower-order couldn’t offer any resistance as India were bundled out for 347 and tied the game. It was only the second time in the history of Test cricket, that a game was tied.