Curtly Ambrose – the name that sent angst to batsmen in 90s

If one walks into the Kings Casino bar at Antigua on a Friday night, they might run into a chilled-out guy in his 50s, donning a floppy hat, playing the guitar for a band called Spirited. On first sight, one might not know who he is. However, as the name Sir Curtly Elconn Lynwall Ambrose […]
By Gomesh Shanmugavelayutham Sun, 5 Apr 2020 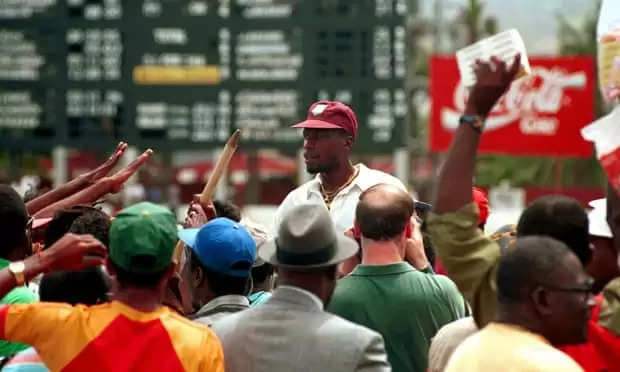 If one walks into the Kings Casino bar at Antigua on a Friday night, they might run into a chilled-out guy in his 50s, donning a floppy hat, playing the guitar for a band called Spirited. On first sight, one might not know who he is. However, as the name Sir Curtly Elconn Lynwall Ambrose is heard, they would have figured out that this guitarist induced fear amongst batsmen across the globe for a decade.

Ambrose’s biography is named ‘Time to talk’. Wonder whether there it could have been titled any better because, while playing Ambrose seldom uttered a word. Forget media, not even to the batsmen he scared on the 22 yards. ‘Curtly speak to no man!’ is the word that had spread around. “I always thought that as a professional, my job was to get on and do my job as a bowler and take wickets. With most of my opponents, there was mutual respect and admiration. However, when it was needed, sometimes a stare was enough to unsettle the batsman,” said Ambrose, once in an interview to PakPassion.net.

Filling in the shoes of the ‘Big Bird’ Joel Garner was Curtly Ambrose – a 24-year-old, fast bowler from Antigua. Ambrose saw the decline of the great Malcolm Marshall post which he, along with Courtney Walsh, carried the legacy of West Indian fast bowling before it diminished by the turn of the millennium. Ambrose was everything a fast bowler was meant to be – tall, quick and accurate. While the first two could be natural strengths, he worked hard on the last, and that is what made him a fearsome fast bowler. Ambrose didn’t have a great start to his career. He had Malcolm, Walsh in the team, and had no choice but to learn quickly. From 1990, till the end of his career in 2000, only once he averaged more than 24 in a year. Such was his consistency.

In the earlier decades, the Caribbean fast bowling was known for their intimidating fast-bowling quartet. South Africa’s reinfusion into Test cricket in 1992 was the first series for West Indies with the rule change in the number of bouncers that can be bowled in an over. It did affect their bowling plans to an extent. Chasing 201, South Africa was 122/2 by the end of day four. With 79 required to win on the last day, they were on the brink of writing a fairy tale comeback to Test cricket.

Ambrose and Walsh had other ideas. While Walsh picked up Kepler Wessels earlier, the uneven bounce in the pitch meant that several edges didn’t carry to the slip cordon. Ambrose attacked the stumps with full-length deliveries and Yorkers. Owing to his pace, it worked, and he dismissed Hanse Cronje, and the rest fell like a pack of cards. Ambrose took 6/24 was the joint man of the match.

It was one of the many instances that the sheer stature of Ambrose and Co. played in the minds of the batsmen. While talking about the intimidating nature of Ambrose, it is not right to do so without mentioning Walsh, as they both fed off each other. Ambrose’s celebration after a wicket is a symbolism of his attitude towards cricket on the field. That wild right-hand punches down the sky before clapping and high fiving around the teammates remains a hallmark.

England got to see more of it than others. One wouldn’t forget what happened at the Queens Park Oval in 1994. After losing the first two Tests, a young England team under Mike Atherton had a chance to revive themselves at Trinidad. Midway through day four, England was given a target of 201 to chase in the fourth innings. A sheer exhibition of fast-bowling was on display in the third session.

Ambrose struck on the first ball removing Atherton for nought. He was on a roll that day. On an up and down pitch, Ambrose forced the English batsmen to stay on the crease. Fearing to play him on the front-foot, they pushed at the ball, edging it to the keeper and slip cordon. When he ferociously attacked the stumps, the batsmen were late on back-foot and were dismissed either LBW or bowled. On the last ball of day four, Ambrose sent the off-stump of Graham Thrope, the last recognised batsman in that line-up, cartwheeling. He finished the day with six wickets, leaving England at 40/8. There’s only one way this match could have ended.

If that wasn’t enough, there was a day when Ambrose took seven wickets for one run in a spell. Yes. You read it right. Seven wickets at the cost of one, just one run against Australia at the WACA in 1993. The top six of the batting line-up comprised J Langer, D Boon, Waugh brothers, Allan Border and Damien Martyn. From 85 for two, they were all-out for 119.

Just when Boon and junior Waugh were trying to build a partnership, Ambrose was brought back into the attack. Immediately he removed Boon and followed it up with the wicket of Waugh. In the next 32 balls he bowled, Ambrose gave way one run and dismissed five more Australians. Back then, Perth was one of the quickest wickets around the world. Combine it with the pace and accuracy of Ambrose the Australians were left with nowhere to hide. Even the great Border couldn’t stand the venom of Ambrose. The top Australian batters were left fending at the ball like tail-enders. He ended with 7/25 that day.

Ambrose hung his boots while he was in good form. “Thankfully, for batsmen, there will no longer be the sight of Ambrose stood in mid-pitch after another wicket, pumping his arms skywards,” wrote Atherton on his retirement. But, on that day in 1993, that particular spell at Perth was the epitomized what peak Ambrose was all about and the fear he had embarked in the minds of the batsmen.