Glenn McGrath recalls Sachin ducking his bouncer, getting furious when given out

Recalling some of his fiercest battles with Sachin Tendulkar, legendary Australian bowler Glenn McGrath has said it ended 50-50 between them but the Indian batting genius was really furious when he was declared out after a low bouncer hit his shoulder. “Was it LBW? Probably, it should have been an SBW – Shoulder Before Wicket,” […]
By PTI Sun, 26 Jan 2020 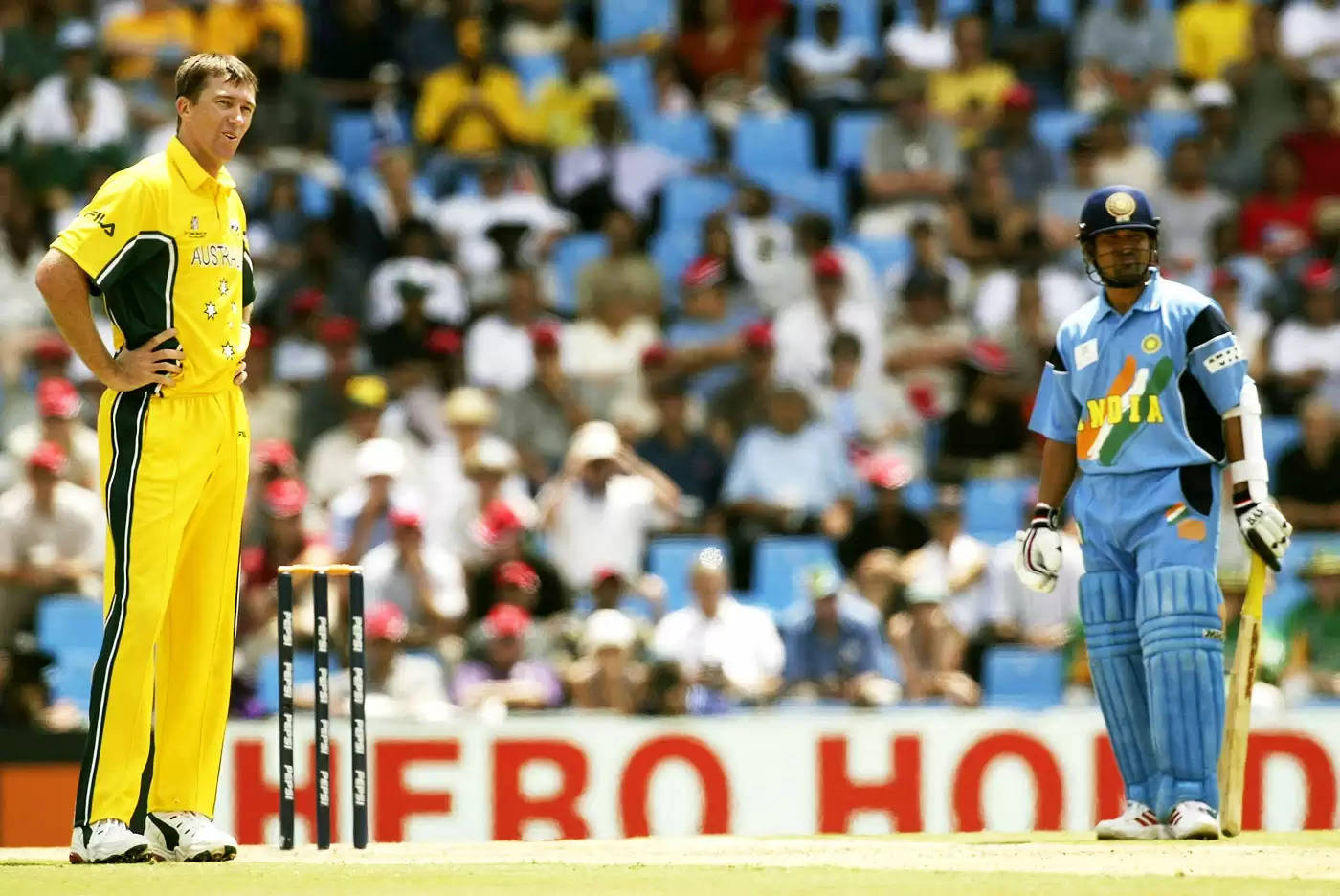 Recalling some of his fiercest battles with Sachin Tendulkar, legendary Australian bowler Glenn McGrath has said it ended 50-50 between them but the Indian batting genius was really furious when he was declared out after a low bouncer hit his shoulder.

“Was it LBW? Probably, it should have been an SBW – Shoulder Before Wicket,” McGrath said, recalling the December 1999 incident in Adelaide Oval when Sachin walked off the pitch clearly unhappy at the decision by umpire Daryl Harper.

Speaking here at a special private session hosted by HCL Tech during the World Economic Forum (WEF) Annual Meeting week, McGrath also recalled an incident when Tendulkar “sledged” him after hitting him for a six and also the World Cup final match in 2003 when he got the Indian legend out.

McGrath said he spends a lot of time in India, has got a lot many friends there and always catches up with Tendulkar when he is in Mumbai, but many Indians still tell him they have not forgiven him for getting Sachin out in the 2003 World Cup final.

In conversation with HCL Technologies’ CEO C Vijayakumar during the special programme hosted by the Indian IT major, ‘HCL Sports Night’, on the sidelines of WEF 2020, McGrath also said it was the attitude, confidence and self-belief that mattered the most when he played cricket.

“For me, it was about always going out there and do whatever best I can do. My attitude was always about focussing on my gameplan and executing that. And I was lucky to play with a team that was excellent with people like Ricky Ponting, Steve Waugh, Shane Warne etc. They were pretty incredible players.

“Attitude was the most important thing to me and even if we had a bad game resulting in a loss, I’ll always take the responsibility of what I gave. If I did well and the team lost, I’ll always view it as what more I could’ve done,” he said.

Asked about his epic battles with Tendulkar and the huge difference in their heights, the almost 6.5 feet tall McGrath said he enjoyed bowling to batsmen who were the best, such as Brian Lara and Sachin Tendulkar.

“I had some great battles with Sachin. I spend a lot of time in India now for coaching etc and that’s like a second home for me. I have a lot of friends there but people there tell me we have still not forgiven you for getting Sachin out in 2003 World Cup final,” he said.

“It was a big match and Sachin opened the innings in Johannesburg, South Africa. Almost 90 per cent, or probably 95 per cent crowd were supporting India, because South Africans either support South Africa or whoever is playing against Australia.

“Sachin came for batting and the first three balls, I kept pretty tight and he didn’t score any runs. The fourth ball, he went for a pull shot, hit me over to mid-off for four runs.

“The crowd was cheering and I’m sure people watching the match India must have been pretty happy too. The next ball was a very similar delivery, just bounced a little more, he went to play that pull shot again but he hit it straight up in the air and it came straight to my hands for a comfortable caught and bowled. I was pretty happy with that, but obviously Indian fans were not happy with that.”

Chasing a massive target, Tendulkar was caught and bowled by Glenn McGrath in the first over itself of Indian innings when he top-edged a pull shot. Tendulkar, who was at the top of his form during that World Cup, has often described India’s loss in that match as one of the most disappointing moments of his career.

Recalling another game in Kenya for the Champion’s Trophy, the Australian pacer said he was bowling to Sachin who was opening the innings again.

“I bowled to him, he pulled it and it went straight up in the air. I thought I had got him out and the wicketkeeper would get an easy catch. But there was a breeze there and the ball kept drifting further and further away from the wicketkeeper and then I thought the third-man is going to take it who was ready to catch it and then he started going back and back and the ball finally fell out of the fence for a six.

“I was not very impressed and then I could hear someone saying a few words to me and I turned around and it was Sachin sledging me. That was very unusual and had not happened before,” McGrath told an amused audience.

The Australian said later when Sachin released a book few years ago, he read in the book Tendulkar talking about how he sledged him.

“But it was all good fun,” said Glenn McGrath, who is now 49 years old.

Remembering the third incident from a match in Adelaide Oval, McGrath said, “Sachin was batting and I think he had still not scored many runs or was still on zero, having just come in. I bowled him a bouncer and Sachin is not the tallest guy going around.

“The bouncer will generally bounce and clear him quite easily, but that day when it bounced, it kept low and he ducked it and it hit him on his shoulder. And because he is not very tall, when he ducked it… from where I could see, I could see the bails over the top and it was hitting the middle stumps.

“So, I appealed and the umpire gave him out and he was not happy. So he walks off. Is it LBW? Probably, it should have been SBW or Shoulder Before Wicket,” McGrath said.

The Australian star said still when he talks to Sachin, he says that ball was clearly going over the stumps.

“Again many Indians were not happy with that match and I got sledged a lot after that. But that’s the passion, people have for cricket in India, especially when it comes to Sachin.”

This decision by the then umpire Daryl Harper in the match played in December 1999 is still known as one of the most controversial ones.

Glenn McGrath said it was always good to play against Sachin.

“I got him out a few times and he hit some good hundreds against us. So it was like 50-50 between us,” he said.