India v Pakistan – A Test rivalry that is least talked about

Sport is a way of life. Much like our life, a lot of things in sport are political, especially off the field. Sport and politics are intertwined so much that the impact of one on another is inevitable. And more often than not, it is the latter that affects the former. There could not be […]
By Gomesh Shanmugavelayutham Tue, 12 May 2020 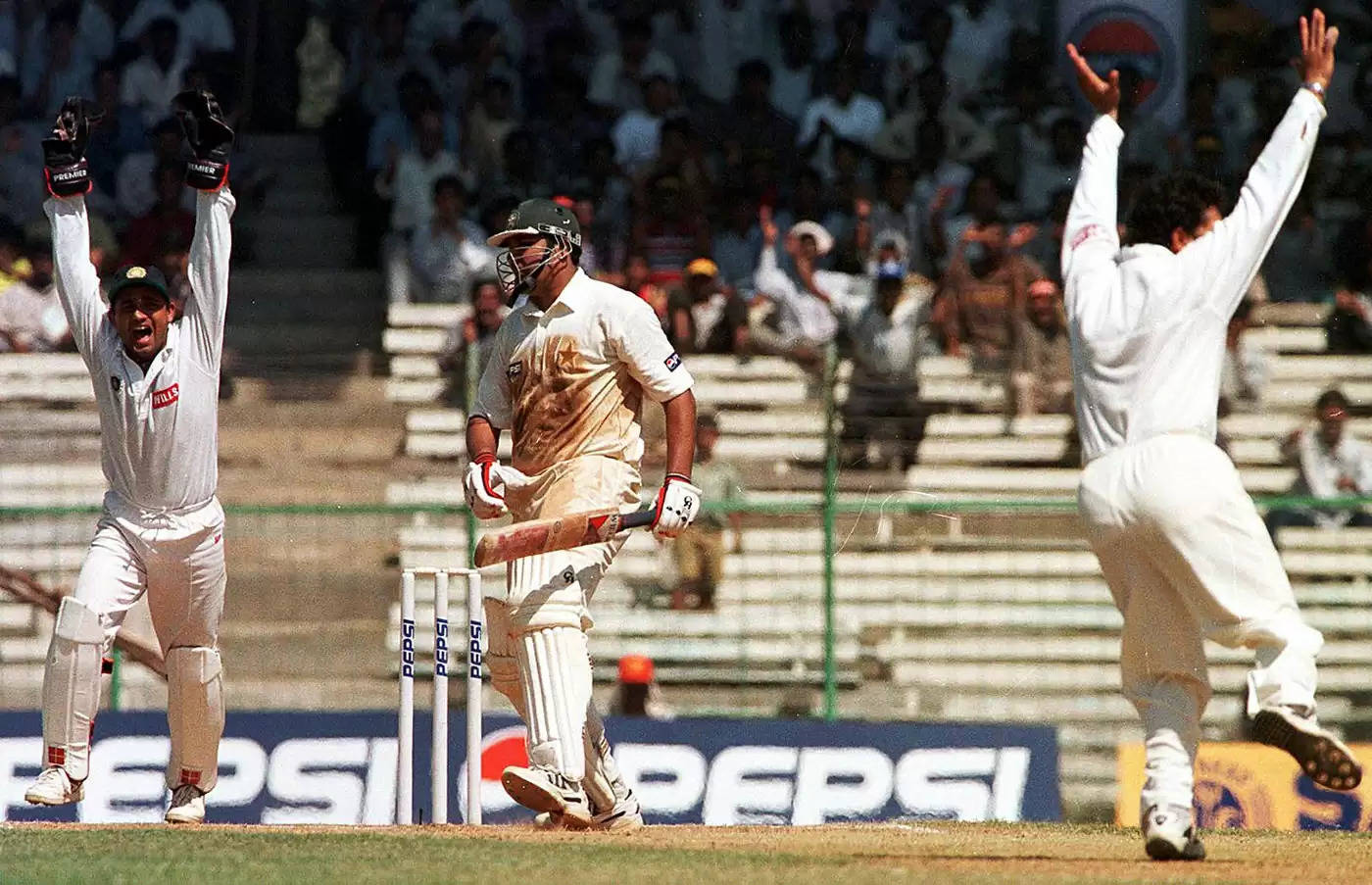 Sport is a way of life. Much like our life, a lot of things in sport are political, especially off the field. Sport and politics are intertwined so much that the impact of one on another is inevitable. And more often than not, it is the latter that affects the former. There could not be a better example to explain this than the sporting relations between the two subcontinental cricket giants – India and Pakistan.

The partitioned neighbours met each other for the first time on a cricket field in 1952. Since then they have played in 10 bilateral Test series that comprised 44 Test matches until 1989. Over the next ten years, India and Pakistan did not play a Test match due to political conflicts between them. It has never been the same after that.

While much has been made about the India-Pakistan rivalry in World Cups and Limited-Overs Internationals, which has become more of a cringe broadcasting exploitation at least in the recent past, the Test rivalry between the two countries is least talked about. In many ways, the Test match battles have been way better than the LOIs.

The last time India and Pakistan played a Test match was in November 2007. Post the 2008 terror attack in Mumbai, the Indian government and the Board of Control for Cricket in India decided not to play any bilateral series with Pakistan. Despite multiple attempts to negotiate, they haven’t played a Test series in 13 years. All they managed was a short limited-overs series by the end of 2012.

After a decade-long break in the 90s, things slowly started to change only by the turn of the millennium. The historic visit of the then Prime Minister Atal Bihari Vajpayee to Pakistan for peace negotiations was followed by a two-match Test series with Pakistan in India. That series holds a special place in the history of Indian cricket for both political as well as sporting reasons.

The first match that was scheduled in Delhi had to be moved to Chennai as a few miscreants dug up the pitch to prevent Pakistan from playing. It was a blessing in disguise. Chennai witnessed five days of enthralling cricket, and by the fag end of day five, India lost the match by 12 runs. Sachin Tendulkar’s century in the fourth innings would be arguably one of the best innings while chasing in a match that was lost. What made it special though was the standing ovation that the Chennai crowd gave to the Pakistan team, who did a victory lap around the stadium. It was one of the beautiful sporting moments in Indian history. Despite the animosity, politics and tensions in the border, people cheered good sport. And that was a political statement in itself.

In the second match, Anil Kumble took 10 wickets in an innings to draw the series. While it could be considered destiny, that the series and its result was a perfect platform to build relationships politically for the next few years.

Between 2004 and 2007, India and Pakistan played against each other every year. India visited Pakistan for the first time since 1989, in 2004. It was said that both the cricket boards as well as the broadcasters are going for overkill, by playing that often. At times people might get bored, but it wasn’t the case here, as both India and Pakistan exhibited some extraordinary cricket.

Sehwag and Younis – The Contrasting dominance

It wouldn’t be an overstatement to say that Virender Sehwag toyed Pakistani bowlers in that period. For Sehwag, it was irrelevant whether the match was played Multan or Lahore or Mohali or Bengaluru. He scored four centuries, and all four were 150+ scores, two were double centuries, and one was a triple. In the first-ever Test match that he played against Pakistan, Sehwag scored a 309. He had a huge role in making the series exciting by the rate at which he scored. Sehwag scored 1276 runs in 14 innings at an average of 91.14, striking at 80.2. Only Younis Khan had scored more runs. There was something that brought the best of out him in that contest. He treated Pakistani bowlers, especially spinners, with disdain.

At the other end of the spectrum, Younis was unfolding magic. Whenever the team was in need, or they were put under pressure by a certain Sehwag or Rahul Dravid or Tendulkar; Younis came to the rescue. He batted with utmost eloquence when on the song, especially while he was trying to control in the first innings of the match. Younis scored a double century, missed a couple more by a whisker. However, Younis reserved the best of him to save a Test match in 2007 at Kolkata. Chasing 345 on the fifth day, Pakistan were in trouble at 37 for two. In walked Younis, who was the stand-in captain for an injured Shoaib Malik. He batted with absolute determination and left the field only by the close of play with a century.

Often scrutinised for the lack of consistency behind the wickets, Kamran Akmal as a batsman hasn’t received enough credit for the way he batted. Against India, he averaged 43.88 while batting at number seven or eight, more often than not. And whenever the team was in a corner, he delivered. Want to prolong the lead in third innings, need someone to arrest the top-order collapse, or require an aggressive execution from lower order to accelerate the scoring – Kamran was the man.

He scored centuries while walking in at 243-6, 150-5, and 477-5. The choicest of Kamran was when he came into bat at 39-6 at Karachi after Irfan Pathan got a hat-trick. It was one the best counterattacking knocks played. Kamran’s century took Pakistan to 245, and they went on to win the Test match and the series.

To talk about any India-Pakistan contest without mentioning Shoaib Akhtar would not fit right. He was the leading wicket-taker as a fast bowler between 1999 and 2007 in the India-Pakistan matches. Though a few others have better statistics (Average and SR), they hadn’t played as many matches as Shoaib did. Akthar was about more than just numbers. It is the impact that he created set him apart. Those back-to-back yorkers to uproot Dravid’s and Sachin’s stumps in the Asian Test Championship match were a sight to behold.

The twelve matches that India and Pakistan played between 2004 and 2007 had a lot of memorable moments. Irfan Pathan’s hat-trick in 2006, Sourav Ganguly’s double century on his comeback trail, Inzamam ul Haq’s nonchalant strokeplay, long-haired Dhoni smacking Akthar all over the park, Mohammad Asif tearing through the Indian batting order are a few to mention. What we also saw was a bunch of young cricketers rising to the occasion and doing it for the team on both sides. Laxmipathy Balaji played six out of eight matches in his career against Pakistan, and he took 26 wickets.

The pitches weren’t really helpful for the fast bowlers. Often the scoring rate was more than 3.5 or 4. There were a few boring draws where both the teams scored more than 500 runs in the first innings. Despite that, the fans were entertained. Sport is for the spectators, and when they have fun, one can be satisfied that it was all good sport. The fans have been deprived of it since 2008.

What have we missed?

Think about the matchups that could have happened in the past decade. Misbah-ul-Haq’s team in 2014-15 could have been strong rivals for the Virat Kohli’s team then. Ravichandran Ashwin and Ravindra Jadeja have made the most solid batsmen of spin look clueless in the subcontinent. Imagine Misbah and Younis batting against Ashwin and Jadeja in their peak. It could have been a mouth-watering contest. Similarly, Cheteshwar Pujara and Ajinkya Rahane batting on day five in a hot UAE summer to save a Test match or the sight of Kohli dominating the likes of Yasir Shah, Mohammad Abbas, Wahab Riaz and Mohammed Amir is the kind of contest that cricket has missed.

The fans, who started watching cricket with the advent of India Premier League or after that would not have seen much of the competitive battles between India and Pakistan. Most of the LOIs have been one-sided. The ‘Mauka Mauka’ TV commercials and Bollywood stars screaming on camera for India-Pakistan matches have made it more cringy than ever.

With the kind of political pressures that exist between the two governments in recent years, especially in India, it is hard to see any bilateral series happening between India and Pakistan in the near future. Both India and Pakistan are great sporting countries. They have provided so many captivating contests on the cricket field in the past. If someone like Virat Kohli or Babar Azam is to end their career without playing Test cricket against each other, it is a shame and cricket is poorer for it.