On This Day: 1975 World Cup Final – A buccaneering battle between bat and ball

Sunil Gavaskar’s discombobulating effort on day 1 to Clive Lloyd’s pyrotechnics on the final day, the 1975 World Cup is remembered for more reasons than just being the inaugural edition of the tournament. It was cricket’s renaissance – not just in a cultural sense but also as it laid the foundation stone towards a mentality […]
By Anuraag Peesara Sun, 21 Jun 2020 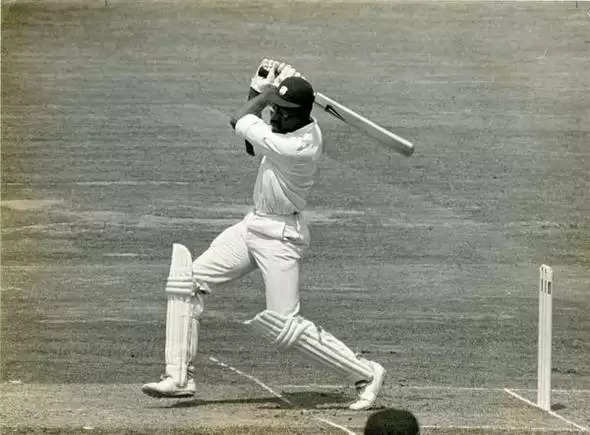 Sunil Gavaskar’s discombobulating effort on day 1 to Clive Lloyd’s pyrotechnics on the final day, the 1975 World Cup is remembered for more reasons than just being the inaugural edition of the tournament. It was cricket’s renaissance – not just in a cultural sense but also as it laid the foundation stone towards a mentality change.

The West Indies team had entered the competition as one of the most threatening teams. They had promising youngsters in Vivian Richards, Gordon Greenidge and Andy Roberts along with the experience of Deryck Murray, Rohan Kanhai and Roy Fredericks, and led by a complete-package leader in Clive Lloyd, this team had ticked more boxes than one could imagine.

Only Pakistan managed to test the Caribbean character in the group stages, where Andy Roberts and Deryck Murray took their side home from the jaws of defeat with two balls remaining. This frantic thriller was later on described as the “First World Cup classic”, but little did people know it was the first of many.

Ian Chappell’s Australian unit had already lost once in the group stages to Australia, where Kallicharran and Roberts took centre-stage by steering their side to a comfortable win. The likes of Alan Turner, Ross Edwards, Dennis Lillee and not to forget, the tournament’s highest wicket-taker, Gary Gilmour had all played their part leading up to the game.

Two teams (West Indies and Australia) with sky-high aspirations had one final hurdle to fathom and overcome before they could lay hands on the glorious trophy. Indeed, the stage was set for a grandiloquent finale.

Day of the final 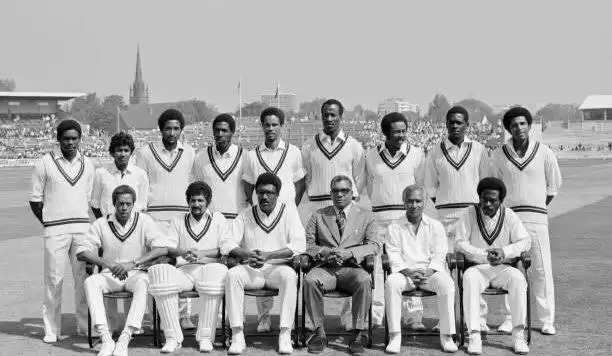 West Indies team posing before the start of the World Cup final game.

The Mecca of Cricket let in just over 27,000 people to witness the final, with some notable names like Denis Compton and Jim Laker in attendance. Also, there was a large Caribbean contingent inside the stadium. Out came both captains, Ian Chappell and Clive Lloyd, with maybe some fear in their hearts, but with a look on their face as nonchalantly menacing as it gets. West Indies won the toss and elected to bat.

Dennis Lillee kept it short early on, trying to play with the minds of the openers. In a hilarious turn of events, Roy Fredericks hooked Lillee’s impending short delivery over the boundary, but also lost his body balance and barged into the stumps. Kallicharran followed suit and Greenidge’s troubles were put to end soon as well. They were three down before hitting the 50-mark.

Australia’s delectation, however, was short-lived. Clive Lloyd’s single greatest day of his international career began with a beautiful flick off Lillee followed by a thunderous hook for a six in the same over. The Aussies had one small chance to avoid all of this, but Ross Edwards dropped Lloyd at mid-wicket and there began a carnage whose tales are remembered till date.

Lloyd and Kanhai’s partnership kept growing in strength, with the skipper not letting a single opportunity go in vain to prove his dominance. With an arrogant heave down the ground for a boundary, he got to his half-century, after which Ross Edwards and Dennis Lillee spilt Kanhai’s catches in the deep. A day which started brilliantly was slowly turning into a nightmare for the bowling unit.

Gilmour, Lillee, Thompson – all of them bowled their hearts out, but Lloyd was in a different zone to be perturbed. With a single towards point, he brought up a hundred and in quite controversial circumstances, he walked back for an 85-ball 102. There was some doubt over the legitimacy of the catch from Rodney Marsh, but Dickie Bird raised his finger after a long deliberation against the West Indies skipper.

Wickets fell in quick succession after that, but Keith Boyce and Bernard Julien ensured the side got close to 300. Gilmour did some significant damage to their middle order and picked up a five-for, but the West Indies posted 291 runs for the loss of 8 wickets. 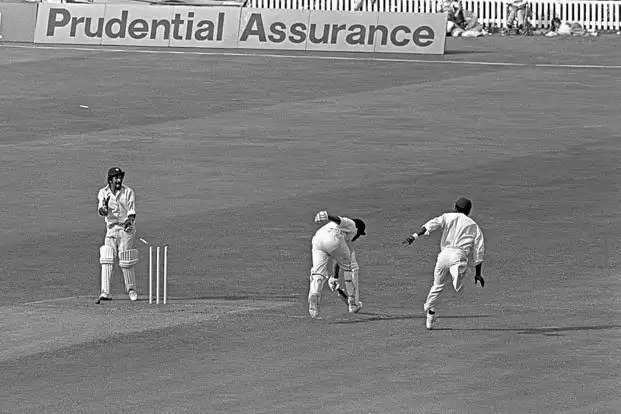 Vivian Richards had a torrid time with the bat that game, with Gilmour knocking his stumps while he was batting on 5. However, one thing we learned about Richards in that game was never to write him off until the last ball is played.

Boyce, who registered some important runs with the bat, also provided the first breakthrough. In walked Ian Chappell at number three, who did register a masterful half-century, but was unaware of the fielding brilliance he was about to witness.

Alan Turner was proving to be dangerous with his audacious striking but after a small mixup with his skipper, Turner failed to complete a quick single. Richards was quick to lash on from midwicket and his direct hit sent Turner back to the green room.

Brothers Greg and Ian didn’t have many opportunities to bat together and wreak havoc, but they started off on a great note here. Their presence in the middle kept the Caribbean crowd silent, but Richards once again resurrected his countrymen.

Ian Chappell tucked it towards point and both brothers were in two minds, whether to take a single or not. They decided to go for it a bit too late, and before Gregg could reach the striker’s end, Richards had inflicted another direct hit.

Once again Aussies fought back with Dough Walters taking the attack to the bowlers. Chappell completed a fifty and looked in brilliant touch. Once again to the Caribbean rescue against the run of play, it was Vivian Richards who inspired a piece of magic.

Chappell flicked it hard and even the camera person felt it raced past midwicket, but Richards managed to get a hand on it and threw it back to his skipper, who knocked the stumps before the Aussie skipper could reach the non-striker’s end.

Boyce began his fast bowling masterclass after this, dismissing Marsh, Edwards and Gilmour. Jeff Thompson fought valiantly, but all he could do was earn certain respectability to the Australian total.

West Indies had a blooper before the winning moment when the final wicket fell off a no-ball from Holder. The Caribbean crowd barged in with unparalleled joy, only to be sent back to refill their batteries.

The winning moment finally came when Thompson wildly swung his bat off Holder and made no connection, and Murray behind the stumps was smart enough to throw it back to the stumps. Once the finger went up from the square-leg umpire, West Indies players ran in unison towards the dressing room while the crowd once again stormed in, this time there was no one stopping their moment. 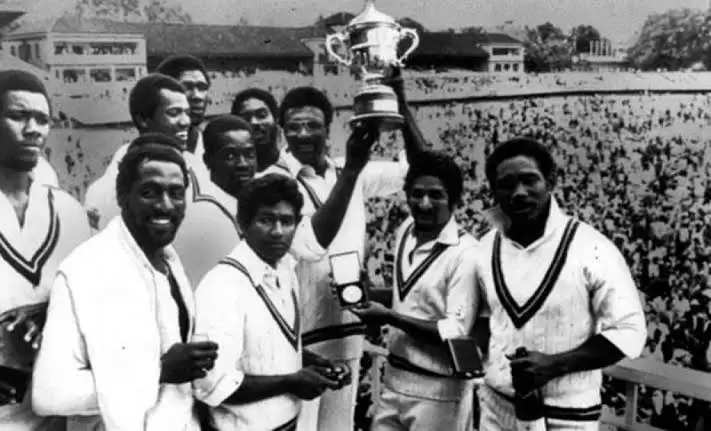 Australians were bowled out for 274 runs, 18 short off their target. A game full of ups and downs, twists and turns, so many of the unforgettable run-outs, eventually ended with a run-out and curtains were drawn to one of the greatest ODI games of all time with smiles all over the West Indian faces.

This game summed up West Indian cricket in a nutshell. Every time adversity showed up, they smacked it away from their sight. While they said no words, they did the talking with wild cross-batted heaves, dismissive drives off the front-foot, deadly bouncers from their speedsters and to cap it all, those iconic glares.

The quality of cricket in this game was as good as one can ask for, besides the catches that went down. The cliche “Cricket is the biggest winner” was never truer, all that’s remembered are the images of Clive Lloyd in the balcony, raising the trophy with a forced smile.

Lloyd’s carnage, Richards’ precision, Boyce’s gruesome spell – all resulting in a triumph of a lifetime in the first World Cup final, happened on this day (21st June), 1975.