On this day: Nein perfect ten for Wayne James

Cricket. It’s an odd game. So, what were the odds of former Zimbabwean Cricketer Wayne James achieving the following feat on this day back in 1996? In the final of the Lonrho Logan Cup (Zimbabwe s domestic competition) that ended in Bulawayo on Apr 21, Matabeleland beat Mashonaland by six wickets. The tall and lanky […]
By Rajarshi Das Tue, 21 Apr 2020 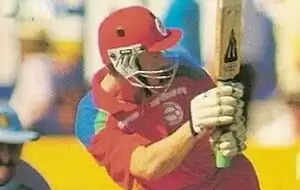 Cricket. It’s an odd game. So, what were the odds of former Zimbabwean Cricketer Wayne James achieving the following feat on this day back in 1996?

In the final of the Lonrho Logan Cup (Zimbabwe s domestic competition) that ended in Bulawayo on Apr 21, Matabeleland beat Mashonaland by six wickets. The tall and lanky occasional Test wicketkeeper Wayne James effected a world record equalling 9 dismissals in the first innings, and added four in the second. The total of his 13 dismissals broke the then-world record too. He also cracked 99 in the first innings, and was then 99 not out in the second.

The Final of the 1996 Lornho Logan Cup had quite a few International stars, namely, Robin Brown, Alistair Campbell, Glen Bruk-Jackson, Craig Evans, Bryan Strang and Stephen Peal turning up for Mashonaland. Mark Dekker, Heath Streak, John Rennie and Wayne James, who was also the captain of Matabeleland, turned up for their side. The Matabeleland side also had a father son combo in the team, with Heath Streak and his father Denis playing together.

Mashonaland won the toss and chose to bat. After the opening pair of Brown and Stead put up an opening stand of 43, the Matabeleland bowlers picked up three quick wickets. Alistair Campbell was also scalped for a duck as James took all three catches. Matabeleland reduced Mashonaland to 114/7, with James effecting all seven dismissals including stumping both Bruk-Jackson and Evans off the left arm spin of Vaghmaria. Left handed batsman Jason Oates, the Mashonaland number 3 along with Zimbabwe left arm quick Bryan Strang steadied the ship and took the total to 251 before being dismissed for a well deserved 115, caught in the outfield by Graeme Peck, the first non wicketkeeper dismissal in the innings. Mashonaland were all out for 265 soon after, as Strang too scored a half century. Wayne James ended up with 7 catches and 2 stumpings to his name. In the process, he equalled Tahir Rashid’s record of 9 dismissals which the Pakistani set in the season of 1992-93, with 8 catches and a stumping.

Matabeleland were 15/3 when James walked in to bat. Despite having meagre support from the other end, the right hander dug in, hung around and was finally out one short of his hundred, caught by Alistair Campbell off the bowling of Peall. Matabeleland were all out for 220, conceding a lead of 45.

A fiery spell fo bowling from John Rennie ensured that Mashonaland could not capitalize on their lead. Rennie went on to take 6/42 as Mashonaland slumped to 128 all out. James took 4 catches in the innings, thereby setting a world record of most dismissals by a wicketkeeper up until that point.

After reducing Matabeleland to 15/4 as they were chasing 174, Mashonaland thought that they had a chance at the title. But it was that man, Wayne James again, who came to Matabeleland’s rescue. Aided by an unbeaten 57 from left hander Mark Dekker, James ensured that his team crossed the line. With only two runs remaining for victory, James was on 99. 4 byes conceded by Mashonaland keeper Donald Campbell meant that despite such a phenomenal achievement and the Logan Cup title to boot, Wayne James could not achieve a perfect ten for once, both with the bat or the gloves.

Although James went on to play only 4 Tests and 11 ODIs of Zimbabwe, his unique record ensured that his name would be remembered by Cricket pundits for years to come. His record of 13 dismissals in a first class match stood for the next 15 years, and was finally broken in the Ranji Trophy, by Hyderabad’s Ibrahim Khaleel, who effected 14 dismissals (11 catches and 3 stumpings) against Assam.