Between September 2018 and February 2019 (before the Test series in South Africa), all Sri Lanka could win was one game. 10 ODIs, seven Test matches, two T20Is, 16 losses, one no result and one win. Apart from the win, the only positive was their draw against New Zealand when Angelo Mathews and Kusal Mendis […]
By Sahil Jain Fri, 11 Oct 2019 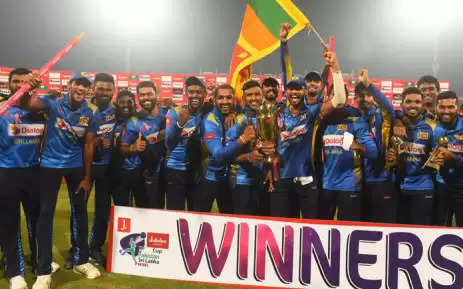 Between September 2018 and February 2019 (before the Test series in South Africa), all Sri Lanka could win was one game. 10 ODIs, seven Test matches, two T20Is, 16 losses, one no result and one win.

Apart from the win, the only positive was their draw against New Zealand when Angelo Mathews and Kusal Mendis batted out of their skins to save the game. There was nothing else to cheer about. Game after game, irrespective of the format, only a defeat loomed every time. Sri Lanka were battered and bruised by the time they landed in South Africa.

There were talks about the scheduling. Three tours – New Zealand, Australia and South Africa in the same stretch and that too in three months can be very gruelling. The first two of those went as predicted – Sri Lanka lost almost everything barring one game. They were written off just ahead of the Test series in South Africa. And that wasn’t any surprise, given the way they’ve played and the team that they carried.

Captains were appointed and removed. Players were chopped and changed too. There was hardly any confidence going around. Hence, it was no surprise to see people write off the Lankans.

However, that’s when they stung and shocked the world. They beat South Africa in their own den. No other team had done that for the last seven series. After England defeated them in the 2015-16 season, they had lost a mere two Test matches at home. However, the underdog Sri Lankan team did it.

Yes, it took a herculean effort from Kusal Perera, reminiscent of a certain Brian Lara from 1999 vs Australia to help the Lankans win the first Test. But they eventually got over the line. Nobody expected them to. They did it again in the second Test and this time, a lot more convincingly. They did concede a first innings lead but they came back and shocked the world, again.

This was a Test series win after losing three in a row. In fact, the first of these wins was their first international win in 2019, first Test win after July 2018.

However, this was Test cricket which was deemed as Sri Lanka’s best of the three formats. Their white-ball form was worse. To make matters worse, it was the World Cup year. In fact, in the lead up to the World Cup, Sri Lanka won just one game in 2019. Even that came against Scotland.

There weren’t a lot of people who gave Sri Lanka a chance anyway. However, their situation had never been worse. Their team underwent a complete overhaul just before the World Cup. Yet again, the captain was changed. Yes, for the nth time.

After the thrashing New Zealand handed them in their opening game, they were in danger of losing to a spirited Afghanistan side as well. However, they held their nerve to open their account. There was hardly anyone who took Sri Lanka seriously during the World Cup.

Two abandoned games and a predictable loss against Australia just opened up the wounds. Once again, Sri Lanka were written off. They faced favourites England next who were fresh of a record-breaking batting performance against Afghanistan. Another thrashing was on the cards.

But once again, just when all hope was lost, Sri Lanka stung again. It was only Mathews’ 85 that lifted to 232. Everyone simply assumed it would be a cakewalk for the famed and powerful England batting line-up. However, there was a twist and another veteran Lasith Malinga provided that twist. He bowled a match-winning spell to bowl his team to a world-shocking win.

No one, literally no one saw that coming. England losing to Sri Lanka was the last possible result on everybody’s mind. Yet again, Sri Lanka sprung a surprise, out of nowhere. That loss nearly derailed England’s World Cup route to the semi-final. It brought alive the World Cup which was in danger of facing a bulk of dead rubbers. However, post that, Sri Lanka won just one game and expectedly crashed out of the World Cup.

Post World Cup, Sri Lanka thrashed Bangladesh 3-0 and had a mixed series against New Zealand. They squared the Test series 1-1 but lost the T20I series 2-1.

Then came the tour to Pakistan where as many as 10 senior or rather first-choice players from the ODI and T20I side opted out of the tour. It was literally a second-string Sri Lankan side that travelled to Pakistan, led by Lahiru Thirimanne (ODIs) and Dasun Shanaka (T20Is).

As expected, nobody gave them a chance. Sri Lanka’s full-strength side had itself been struggling. Expectedly, they lost the three-match ODI series 2-0 with one game washed out. The T20s commenced and again, there was no hope. Afterall Pakistan were the No. 1 T20I ranked side in the world. 2019 has been a little disappointing but Pakistan did have a fabulous record since the end of the 2016 World T20. Hence, Sri Lanka were once again underdogs big time.

However, to everyone’s surprise, they shock the world again. This time, they whitewash Pakistan 3-0 in their preferred format and in their own backyard. They set a template for the entire series – bat first, get decent runs on the board, get early wickets and eventually, dominate and win the game. In the process, they unearthed a couple of exciting talents.

Hence, it’s been a hell of a year for Sri Lanka so far. ‘One minute down and the other minute up’ is how Nasser Hussain had described Pakistan cricket a couple of years back. However, no team has been as unpredictable as Sri Lanka this year. Every time you write them off, they come back to surprise the world.

In 37 international games, they may have jut 14 wins but most of them have come in games they were originally underdogs. They never seemed to have the team yet game after game, they’ve found a way to come back and bite.