Would love to be a part of the first World Cup-winning New Zealand team: Mark Chapman

November 15, 2015: An engineering student was sitting in the examination hall, writing the final exam for the semester in New Zealand. After completing the paper, he rushed to the airport to depart for Dubai where he was set to feature in the ICC World Cricket League Championship after being named in Hong Kong’s squad. […]
By Shiv Dhawan Sat, 27 Jun 2020 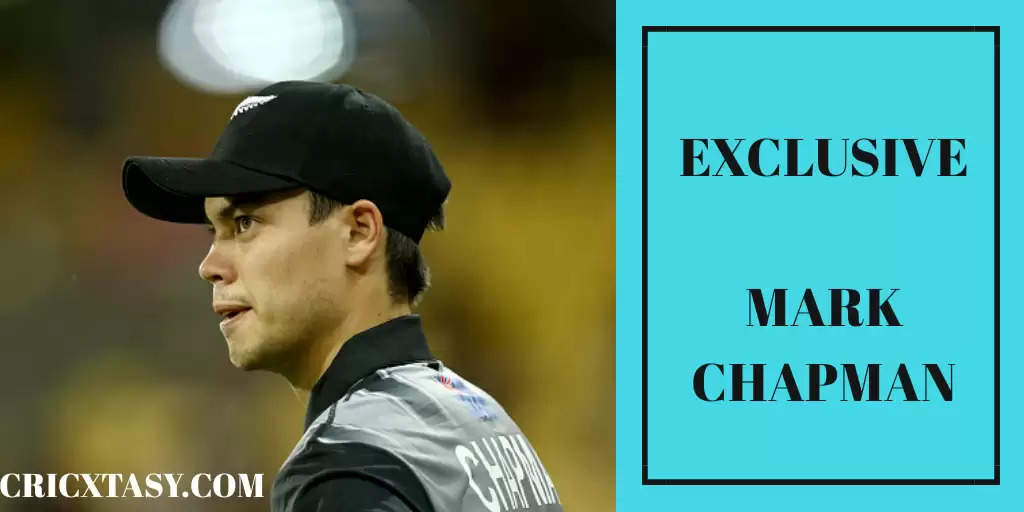 November 15, 2015: An engineering student was sitting in the examination hall, writing the final exam for the semester in New Zealand. After completing the paper, he rushed to the airport to depart for Dubai where he was set to feature in the  ICC World Cricket League Championship after being named in Hong Kong’s squad. The following day, he received his ODI cap and scored an unbeaten century on his debut against the United Arab Emirates. Five years later, the student, Mark Chapman, has put both of his cricket and engineering skills to use as he represents New Zealand in international cricket and owns a brand that makes protective cricket equipment.

In an exclusive conversation with CricXtasy, Mark Chapman opens up about his journey from playing for Hong Kong to New Zealand, his engineering prowess, cricket in associate nations, and his aspirations.

Q. Did you always aspire to play for New Zealand after having played for Hong Kong?
My father is from New Zealand and worked as a civil servant in Hong Kong for many years. The location of my upbringing meant that playing opportunities presented themselves with Hong Kong, and it was an invaluable part of my cricketing journey. But ever since I was a young man I had ambitions to play for New Zealand, so that made the decision to pursue my dream an easy one.

Q. You have a century on ODI debut in 2015 for Hong Kong. What is the story of flying in from New Zealand after finishing your exams?

I completed my Engineering Degree at Auckland University alongside my cricketing commitments with Hong Kong. Balancing study and cricket opportunities was certainly challenging at times, and in this case, I finished my last exam for the semester in the afternoon and was on an overnight flight to Dubai that evening, only to arrive in Dubai the next day and receive my ODI cap. It’s a bit crazy to think about it now! But at the time I was just enjoying being finished with exams and having the opportunity to travel and play cricket.

Q. You’ve brought your engineering degree to use by starting a protective equipment brand. Tell us about that.
To put my Engineering degree to use I started a brand last year ESCU Sports. It’s a brand that designs modern protective cricket equipment. We launched our Wrist Guards last year which were extremely well received by players around the globe. We have had the likes of Steve Smith, Ross Taylor, David Warner, and Babar Azam adopt our product. It’s something that has helped me balance the external pressures and expectations that come with being a professional sportsman. While it is still involved with cricket, it’s something away from playing and training that helps me escape and shift my focus to.

Q. Even today, cricket isn’t as big a sport in associate nations. What prompted you for a career in cricket and when did you decide to pursue the sport as a career?

Yes, I definitely saw the challenges Associates face as a collective first hand, and for many, it is a constant struggle and balance between part-time work and cricket. I was fortunate that during my time with Hong Kong I was completing my University degree. Cricket was always something I wanted to pursue as a career, but looking back I was lucky in the timing of how things played out with my transition into professional cricket in New Zealand.

Q. You’ve featured for a Test-playing nation as well as an associate nation – How much of a gap is there between the two?

There are definite differences in the resources available between Test and associate nations. It’d be great to see cricket’s premier governing bodies get together and put a plan in place with a target to globalize the sport.

Also Read:  EXCLUSIVE: Recalling Scotland cricket’s memorable win over England and the needs of Associate cricket with Calum MacLeod
Q. Mental health is a big part of the sport. Having made some tough decisions regarding your career have you faced any difficulties in your career with regard to that?
I think the new generation of cricketers has a growing appreciation for mental health. The nature of the professional sport means that athletes are more predisposed to mental health issues and I’m no exception. Having been exposed to these sorts of things both directly and indirectly has given me a newfound respect and appreciation for mental health.
Q. How has the experience of playing under Kane Williamson been? And who is one current captain under whom you would love to play?
There’s not much difference between the Kane you see in the spotlight and the Kane behind the scenes, he’s calm, composed, and measured. It’s been great to play alongside the likes of Kane and Ross Taylor. They both have a wealth of knowledge and understanding of the game and it’s great to chat with them about cricket and batting. I’ve always admired Kumar Sangakkara, both from a playing and knowledge perspective. I would have loved to experience playing alongside him, and I hope that one day I will get to meet him and ask him a few questions!
Q. You’ve featured for the St. Lucia Zouks, what is your opinion about T20 leagues across the world? Would you like to feature in more of them?
I think T20 leagues have transformed the modern game. It has allowed cricketers to become connected with other players from across the globe. I’d definitely love to feature in a tournament like the IPL one day, but for now, my priority is to play for New Zealand.
Q. Which is your most preferred format, one that you would want to play most often, and why?
This is a tough question as all three formats have their unique characteristics, and we love them for different reasons. Over the last couple of years, I have started to really enjoy the longest format of the game, and it is an ambition of mine to play Test cricket.
Q. Is there a regret of not making it to the World Cup squad in 2019?
I would have loved to be a part of that World Cup team but I’m still working into my international career with New Zealand and I’m sure there will be more opportunities down the line. Having been inspired by the 2015 and 2019 World Cups, I would love to be a part of New Zealand’s first World Cup-winning team.

Also Read: Could corona-free New Zealand be a neutral venue for cricket matches?