Pat Cummins became the most expensive overseas signing in IPL history on Thursday (December 19) with Kolkata Knight Riders picking up the top-ranked Test bowler for a whopping INR 15.5 crore at the IPL 2020 auction. The signing amount was one crore more than what Rising Pune Supergiant spent on Ben Stokes in IPL 2017 […]
By Sidharth Thu, 19 Dec 2019 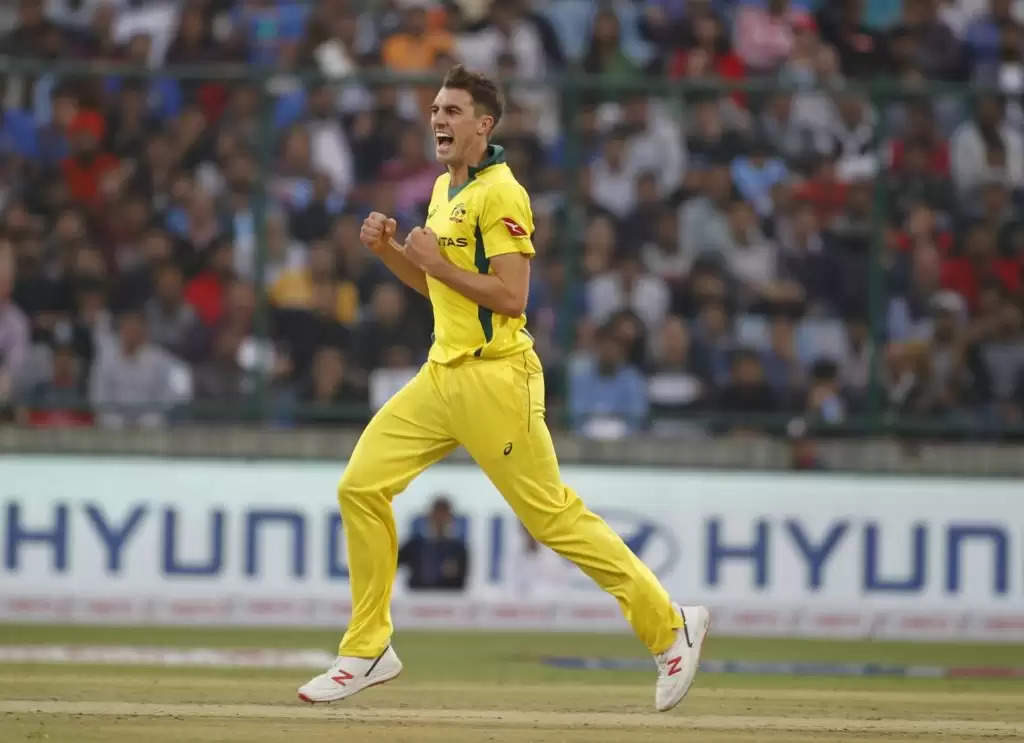 Pat Cummins became the most expensive overseas signing in IPL history on Thursday (December 19) with Kolkata Knight Riders picking up the top-ranked Test bowler for a whopping INR 15.5 crore at the IPL 2020 auction. The signing amount was one crore more than what Rising Pune Supergiant spent on Ben Stokes in IPL 2017 – the previous record price for an overseas player. Cummins’ compatriot Glenn Maxwell was signed by Kings XI Punjab for INR 10.75 crore. South Africa’s Chris Morris also hit the INR 10 crore mark with Royal Challengers Bangalore securing his services. Get highlights of IPL 2020 auction here

20:50 hrs IST: Tom Curran at base price, 1 crore, sold to RR. Nikhil Naik (20 lakh) once again bought by KKR. AND THAT’S ALL!!!! The teams are satisfied with their choices. Who do you think has the most balanced squad heading into the next season?

20:45 hrs IST: Welcome back! And Steyn gets third-time lucky. Picked up by RCB for his base price of INR 2 crore. Andrew Tye goes to RR for 1 crore. Allrounder Lalit Yadav goes to his home city, Delhi, for base price 20 lakh.

After 15 minutes, we will have one more accelerated round. Teams will now name three players each. Should be the end then.

Also guys, just so you know, there is a ‘Marcus Stoinis’ Haircut Appreciation Society’ ~> @monkey_brennan. Time to boost its membership! #IPL2020Auction

20:15 hrs IST: Colin de Grandhomme re-enters at INR 75 lakh. Unsold for the second time in the day. Mohit Sharma (50 lakh) will play for DC next year.

20:01 hrs IST: Australia fast bowler Kane Richardson, who was part of their 2019 World Cup squad, picked up by RCB for INR 4 crore. England’s Chris Jordan sold to KXIP for 3 crore. RCB too bid for him but backed out. Sam’s brother Tom Curran enters at 1 crore. No takers for him. Same story as far as West Indies’ Test captain Jason Holder is concerned. Oshane Thomas (50 lakh), on the other hand, returns to RR.

19:53 hrs IST: England’s Tom Banton now. Only KKR bid for him, and they have him for INR 1 crore. West Indies’ Fabian Allen sold to SRH for INR 50 lakh. UP’s Mohsin Khan (20 lakh) goes to MI. Sydney Sixers’ Josh Phillipe sold to RCB for INR 20 lakh, while Chris Green, who plays for Sydney Thunder, is bought by KKR for INR 20 lakh.

19:47 hrs IST: And we’re back for the accelerated auction process. Former India U-19 player Ayush Badoni asks for bids from INR 20 lakh. UNSOLD

KKR CEO Venky Mysore: “Morgan fits in brilliantly and it’s great to welcome him back home. I remember my first auction, we picked him up, and since then he has gone from strength to strength. He is recognised among his peers as the leader of men. We’ve been happy to keep lifting the paddle from the very beginning for Cummins. That’s how auctions go. Both Cummins and Morgan hopefully bring the rub of the green. Cummins has become that premier allrounder. McCullum can’t stop talking about him. It’s lovely to have somebody who has a strong emotional connect with the franchise.”

We go into a break. All eight franchises will now write down 10 names each and submit it to the auctioneer. Only those players who are named in that list will be available for the accelerated bidding round. This could very well be the last round of the auction.

Australia-India trade getting a new fillip.

18:25 hrs IST: Shimron Hetmyer. He played for RCB last season. RR, KKR and DC bid for him. A chance for all three franchises to strengthen their middle order. 3.8 crore….. 4.8 crore….and on….DC with the 7.75 crore bid. And it’s the winning bid. The power-hitter joins the million-dollar club. Wow!

18:17 hrs IST: Last round before the accelerated round. Each team has to submit 10 names from the auction pool, including those who were unsold earlier today, and they will then have the chance to buy them in the last round.

Another break. Join us 10 minutes!

Wicketkeeper Anuj Rawat up next and the Royals are bidding for him, against @KKRiders.

17:41 hrs IST: India U-19 prodigy Yashasvi Jaiswal snapped up by RR for 2.4 crore. From selling pani puris to a crorepati in the IPL auction. ‘

17:39 hrs IST: India U-19 captain Priyam Garg picked up by SRH for INR 1.9 crore. KXIP get Deepak Hooda for 50 lakh. Varun Chakaravarthy, who was sold to KXIP for INR 8.4 crore last year, enters. Intense bidding between KKR and RCB. Have to admit mystery spinners are always in demand. And Varun sold to KKR for 4 crore.

Say hello to the newest members of the #SRHFamily!

17:31 hrs IST: Rahul Tripathi, who played for the Royals and the now-defunct Rising Pune Supergiant, sold to KKR for INR 60 lakh. No bids for Rohan Kadam (20 lakh) and Harpreet Bhatia (20 lakh).

Young Indian batsmen getting a good pay-day. Hope someone can help them handle it.

17:14 hrs IST: Legspinner Piyush Chawla sold to CSK for INR 6.75 crore. Jadeja, Chawla, Tahir on Cheapuk’s spinning wicket. Will be a tough job for the teams to get past the trio.

Wake up Piyush Chawla, this is for real…….

17:09 hrs IST: Sheldon Cottrell now. KXIP, RR and DC are in the race. All the three franchises are determined to have him. Now 6 crore. This is indeed massive! DC won’t call the 8.5 crore bid, and KXIP have the West Indian. SALUTE!

Another performance against India finds an echo in the IPL Auction. Big salute in #SheldonCottrell‘s hotel room

17:05 hrs IST: Nathan Coulter-Nile is up now at 1 crore. He has previously played for KKR, RCB, DD, MI. CSK and MI are locked in a battle to get the Australian. It has moved up to 6 crore. This is getting interesting! He is a millionaire now. CSK have him at 7.75 crore, and MI push to 8 crore and GET HIM. Brilliant buy! Can even be handy with the bat!

Dale Steyn injured and unsold on the same day. Can’t be more terrifying

16:21 hrs IST: Chris Morris enters at INR 1.5 crore. The South African has played for DC and CSK before. RR make the first bid. KXIP and RCB jump into the race and take it up to 5 crore. Another intense bidding war. KXIP aren’t backing out and the bid has reached 7 crore. Okay, MI join the race. Morris is also a millionaire. Ten crore and RCB have it. MI are out. Chris Morris will turn out for RCB. Good buy but don’t know whether he was worth 10 crore. Remember, he’s injury-prone!

16:16 hrs IST: Sam Curran sold to CSK for INR 5.5 crore. DC also showed interest in the Englishman. Can be a fine replacement for DJ Bravo. Left-arm seamers always add a lot to a pace attack.

16:12 hrs IST: Pat Cummins in at INR 2 crore. RCB make the opening bid. DC join in. The bid has soared past 5 crore. Cummins set to become the second millionaire of the day. Both the franchises are going all out. And, the bid has rocketed to 10 crore. This is turning out to be a massive bidding war. Cummins hit 14.5 crore. Oh, boy! KKR enter the fray and raise to 15 crore. Looks like they will seal the deal. And, the do! Cummins will return to KKR. Sold for a whopping 15.5 crore. The Australian fast bowler is now the most expensive overseas buy ever.

15:58 hrs IST: And as expected, it has got interesting. Kings XI Punjab start the bidding. The Australian has even captained them before. The Capitals join the bidding. Remember, Ricky Ponting rates him highly. An intense tussle between KXIP and DC, who have raised it to 5 crore now. KXIP won’t back out that easily. Maxwell hits 7.25 crore. KXIP push to it to 10.75 crore. DC are out. Maxwell will turn out for KXIP again, sold for 10.75 crore. Could he lead them next year?

And here’s the second set – the allrounders. Glenn Maxwell (INR 2 crore) is the first name

15:50 hrs IST: Aaron Finch, Australia’s ODI and T20I captain, sold to Royal Challengers Bangalore for INR 4.4 crore. Was quite a fight between RCB and KKR. A solid pick! Finch and Kohli at the top with ABD at No. 3. Lethal!

15:45 hrs IST: Jason Roy, the England opener, will attract bids from INR 1.5 crore. DC make the first bid. Just one bid for him – sold to DC for the same price. He had represented the franchise in 2018 too.

15:40 hrs IST: England’s World Cup-winning captain Morgan now. Base price: INR 1.5 crore. Delhi Capitals make the first bid. Kolkata Knight Riders enter the bidding. DC and KKR are locked in a tussle. DC raise it to INR 4 crore. But, but, KKR have jumped ahead. DC are backing out. KKR snap up Morgan for INR 5.25 crore.

15:38 hrs IST: Lynn. Mumbai Indians open up the bid. No interest from the other franchises. And the Australian is sold for INR 2 crore to the four-time champions.

Just 30 minutes to go. Could very well be a long evening….

15:00 hrs IST: Bangladesh (5), Afghanistan (7) and Sri Lanka (14) have found low interest, while none of Zimbabwe’s players will be a part of the auction.

14:45 hrs IST: The players have been grouped as per their specialty, with the auction order starting with batsmen, allrounders, wicketkeeper-batsmen, fast bowlers and spinners. The auction will start with different sets of capped players followed by the uncapped players.

14:18 hrs IST: Among the uncapped Indians, Deepak Hooda has the highest base price of 40 lakh. The Baroda all-rounder, who has played 61 IPL games, was released by Sunrisers Hyderabad. Varun Chakaravarthy, Anureet Singh, Jalaj Saxena are among the five Indian players to have been shortlisted for a base price of Rs 30 lakh.

14:05 hrs IST: Only 14 years old, Afghanistan’s Noor Ahmad is the youngest player in the auction. Ahmad is a left-arm wristspinner and has played seven T20s so far. He has listed his base price at Rs 30 lakh.

At 48, Pravin Tambe, the former Rajasthan Royals legspinner, is probably the oldest player ever to have been part of an IPL auction. Tambe has put his reserve price at Rs 20 lakh.

13:59 hrs IST: Some of the biggest names to go under the hammer are Glenn Maxwell, Pat Cummins, Chris Lynn, Eoin Morgan, Chris Morris, Shimron Hetmyer, and, among Indian names, Robin Uthappa and Jaydev Unadkat. Among the dark horses could be Mumbai’s Yashasvi Jaiswal. He recently became the youngest player ever to smash a List A double-century, in India’s domestic 50-over competition (Vijay Hazare Trophy).

13:50 hrs IST: Meanwhile, the upcoming IPL season will see a window open up for loaning out capped players mid-way through the tournament. While the details are yet to be finalised, it’ll only be open to players who have played a maximum of two games in the first-half of the tournament.

13:45 hrs IST: Hello and welcome to Cricxtasy’s live coverage of the IPL 2020 auction. I’m Sidharth Gulati and I’ll keep you up-to-date about the latest developments at the event.