N Jagadeesan has issued a public apology for his reaction to being run-out at the non-striker’s end by Baba Aparajith in the TNPL 2022 opener on Thursday, June 23.
By CX Staff Writer Fri, 24 Jun 2022 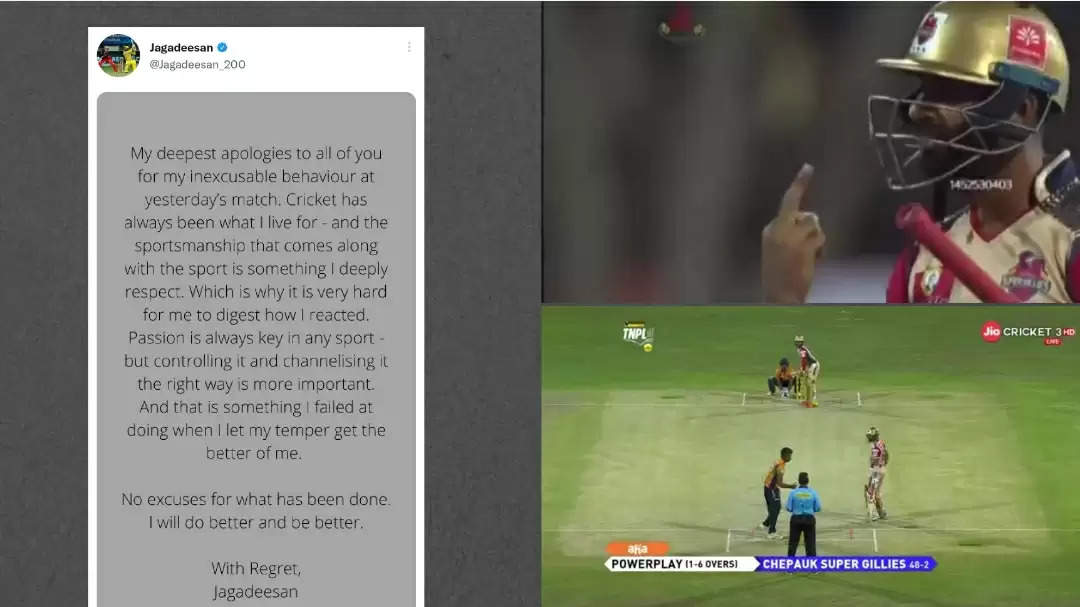 Jagadeesan was seen showing his middle-finger twice, as he headed back to the dugout.

The Tamil Nadu Premier League (TNPL) 2022 kickstarted in Tirunelveli on Thursday with the opening match between Chepauk Super Gillies and Nellai Royal Kings, with the fixture delivering a controversial moment.

CSG wicketkeeper batter Narayan Jagadeesan was run out by Baba Aparajith for backing up at the non-striker’s end in the fourth over of the 185-run chase. The batter was clearly miffed, and showed his middle-finger twice - once with the gloves on, and later with them removed, as he headed back angrily to the dugout.

Jagadeesan’s gesture was much criticised on social media, and the cricketer, regretting his behaviour, posted a public apology on Friday.

Jagadeesan, who represents the Chennai Super Kings in the IPL, and is Aparajith’s teammate at the state team Tamil Nadu, took to Twitter to post an apology message, which read:

"My deepest apologies to all of you for my inexcusable behaviour at yesterday's match. Cricket has always been what I live for - and the sportsmanship that comes along with the sport is something I deeply respect. Which is why it is very hard for me to digest how I reacted.

"Passion is always key in any sport - but controlling it and channelising it the right way is more important. And that is something I failed at doing when I let my temper get the better of me. No excuses for what has been done, I will do better and be better. With Regret, Jagadeesan."

The match would eventually be pushed into a Super Over, with CSG’s Harish Kumar (26* off 12), striking a four off Athisayaraj Davidson with five needed off the final ball in actual play. NRK were set a 10-run target in the Super Over, which they achieved with a wicket and a ball to spare.