Big Bash League has lost its way, not comparable to the IPL or PSL currently: Shane Watson

Despite the completion of 9 successful seasons, the Big Bash League in Australia has lost its way, according to all rounder Shane Watson. Watson said that the quality of Cricket in the T20 League has deteriorated over the years and currently is not comparable to the IPL or even the Pakistan Super League. Watson wrote […]
By CricXtasy Staff Fri, 15 May 2020 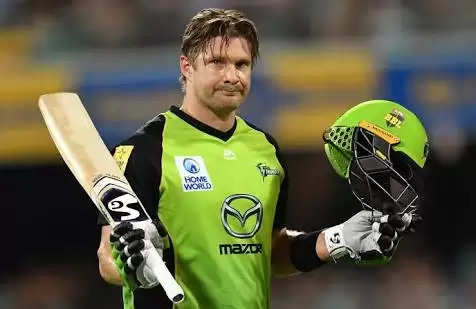 Despite the completion of 9 successful seasons, the Big Bash League in Australia has lost its way, according to all rounder Shane Watson. Watson said that the quality of Cricket in the T20 League has deteriorated over the years and currently is not comparable to the IPL or even the Pakistan Super League.

Watson wrote an enormous piece about the same in his T20 Stars blog, which read, “The one thing that the IPL and PSL do is make the quality of the cricket, the product, the number one priority. They know that if this is of the highest quality possible, then the longevity of the tournament and the commercial growth and success will look after itself. Don’t get me wrong they have all of the bells and whistles as well, however the glitz and glamour goes on before and after the matches but very rarely does the entertainment affect the players ability to perform at their best. This is where the BBL has really lost its way.”

One of Watson’s main concerns is that how the BBL has expanded in its running time, saying that the ‘writing was on the wall’ when the tournament got extended to seven home and away games in addition to the finals back when Cricket Australia announced its new rights deal in 2018.
He wrote, “It has first of all meant that the fans run out of puff. Families only have a certain amount of money and time to come out to the games, so when it was 5 home games, I am sure they were much more open to coming along. Now with 7 home games, families are going to have to pick and choose their games more carefully.”
“The quality of the cricket has been put on the back burner in the Big Bash and the entertainment gimmicks have been brought to the forefront. Continuing on after the kids go back to school is another reason why the tournament runs out of puff in the lead up to the finals when this should be the time when the tournament really cranks up. Again, the tournament is just too long!!! It’s disappointing for all of the families that follow the season so closely until school goes back and the last thing parents want is for their kids to stay up to nearly midnight watching the matches on a school night. I know what it’s like letting my kids stay up past nine o’clock on a school night and the battle we have the next morning trying to wake them up for school.”

Watson was also critical of the entertainment gimmicks used in the BBL, like the mic’ing up of players which he feels chips away at the quality of cricket produced. “The quality of the cricket has been put on the back burner in the Big Bash and the entertainment gimmicks have been brought to the forefront.
“One of the gimmicks that I really feel takes away from the quality of the cricket product is the mic’ing up of players – up to 2 players from each team fielding are being mic’d up with a significant amount of the captains being one of the two players. How in the world is a captain supposed to have his mind on the game when he is being interviewed regularly when he should be focusing on what is required for his team and his own performance, at that moment in time.”
“A number of the young guys are more focused on being entertaining on the microphone instead of prioritising their mental energy, to have it ready to go when the game calls on them, instead of burning it unnecessarily being a player/commentator. The number 1 priority has to be the quality of cricket.”

In addition to this, there’s also the concern over the talent pool in the BBL. Owing to the schedule, a lot of the time the international Australian stars aren’t available for their respective teams. Not only that, the competition allows merely two overseas players with every team.
“These other tournaments have their local international stars playing as well as having 4 overseas players playing, which is producing some amazing cricket to play and to watch,” Watson, who last played for the Sydney Thunder in the BBL, wrote.

To help safeguard its future, Watson even suggested a four point plan which involved reverting back to an older format with fewer games, conducting matches exclusively in quality grounds, increasing the overseas players quota in a team and getting rid of player interviews during a game.