Family, friends supported me a lot during my toughest times: Mohammed Shami

In an Instagram Live session with Rohit Sharma, Indian fast bowler Mohammed Shami made a shocking admission when he said that he considered commiting suicide thrice during the period of early 2018. Shami’s wife Hasin Jahan had publicly accused him of domestic violence. Shami and his brother were booked for domestic violence under IPC Section 498A. […]
By CricXtasy Staff Sun, 3 May 2020 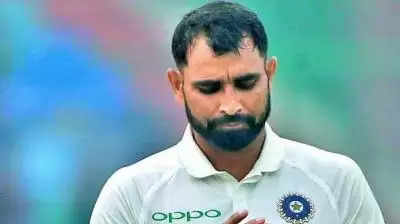 In an Instagram Live session with Rohit Sharma, Indian fast bowler Mohammed Shami made a shocking admission when he said that he considered commiting suicide thrice during the period of early 2018.
Shami’s wife Hasin Jahan had publicly accused him of domestic violence. Shami and his brother were booked for domestic violence under IPC Section 498A.

In the live session, Shami talked about the turmoil that he had to go through during that time. He also shared a horrifying incident which took place a couple of weeks before the 2018 IPL; a truck almost crashed into Shami’s car while he was driving on a highway.

Shami said, “Rehab was stressful as the same exercises are repeated every day. Then family problems started and I also suffered an accident. The accident happened 10-12 days ahead of the IPL and my personal problems were running high in the media.”

ALSO READ: Mohammed Shami: Wasn’t in condition to play 2015 WC semis but Dhoni said can’t go to any other bowler

Shami credited his family and friends for standing by him during such troubling times, also saying that his mind was completely away from Cricket during this period, his mental health being in tatters. His friends, his parents stood by him and helped him recover from rock bottom and return to Cricket.
Shami said, “I think if my family had not supported me back then I would have lost my cricket. I thought of committing suicide three times during that period due to severe stress and personal problems. I was not thinking about cricket at all. We were living on the 24th floor. They were scared I might jump from the balcony. My brother supported me a lot. My 2-3 friends used to stay with me for 24 hours. My parents asked me to focus on cricket to recover from that phase and not think about anything else. I started training then and sweated it out a lot at an academy in Dehradun.”

Shami also said that he suffered a similar phase from 2015 when he got injured in the World Cup that year, as it took him 18 painful and stressful months to fully recover.
“When I got injured in the 2015 World cup, after that it took me 18 months to fully recover, that was the most painful moment in my life, it was a very stressful period. When I started playing again, I had to go through some personal issues, I think if my family did not support me I would not have made it, I also thought of committing suicide three times.”

The mental health and well being of Cricketers are as important as their physical health. It is highly appreciative of Shami to come out and share his struggles with his mental conditions. Major credit to Shami for recovering, not every famous individual can handle such personal issues while at their job, let alone those issues being leaked out to the public. The presence of his daughter also gave him motivation to return, to look after her, after his wife left him. Since his return to International Cricket, Shami has bowled exceedingly well in all three formats, making a comeback into the International team and serving as an inspirational figure to all of us.