Fans question logic to give Kuldeep Player of the Match award in DC v PBKS; Kuldeep shares it with Axar Patel

Axar Patel returned with the figures of 2/10 in the game with the wickets of Livingstone and Jitesh Sharma.
By CX Staff Writer Thu, 21 Apr 2022 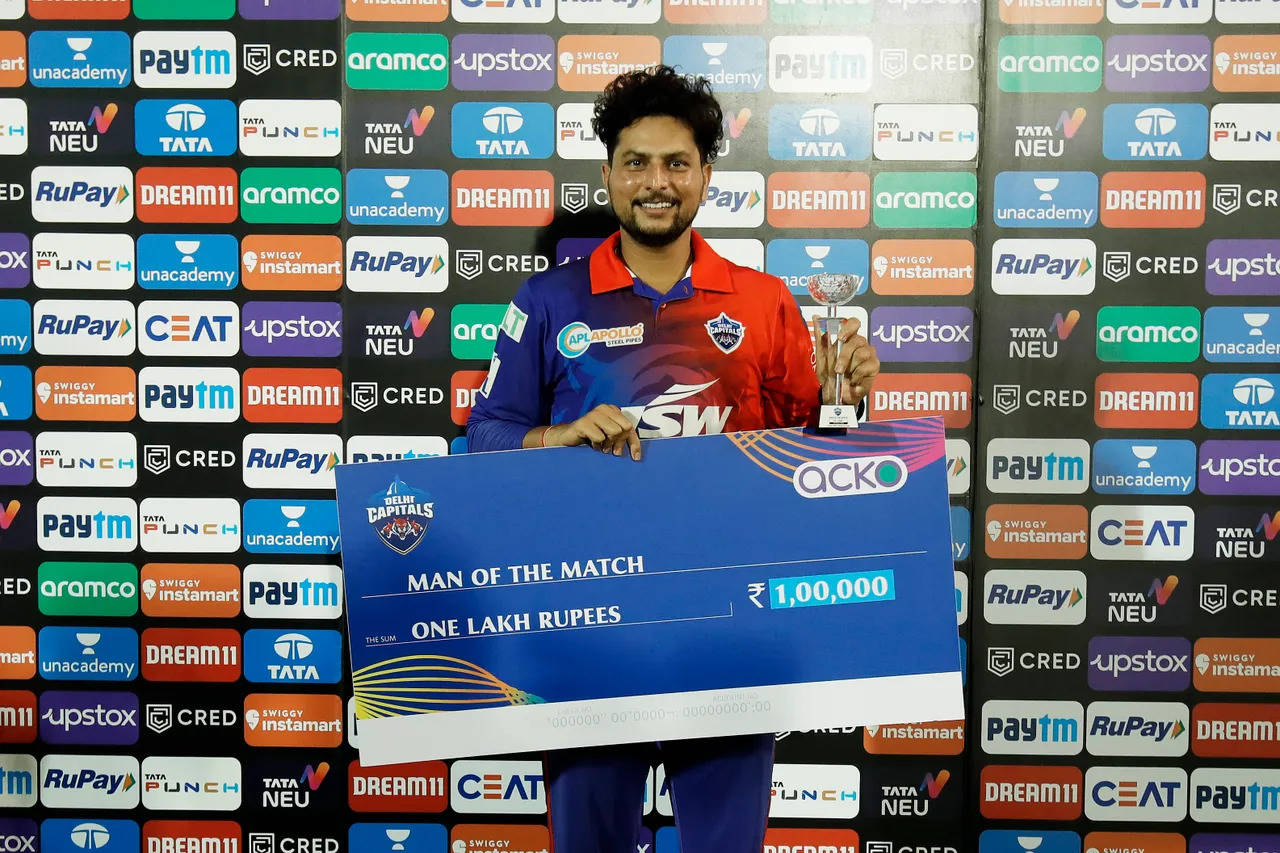 Kuldeep Yadav also felt Axar Patel deserved the award more than him for his impeccable bowling.

Delhi Capitals put on a brilliant performance on Wednesday (April 20) to beat Punjab Kings comfortably by nine wickets. After winning the toss, they bundled out the opposition for just 115 runs and then the batters, especially Prithvi Shaw and David Warner made sure that they chased down with more than nine overs to spare.

While many were delighted to see such a performance from the Capitals, the fans were surprised to see Kuldeep Yadav getting the player of the match award. The left-arm wrist spinner had returned with the figures of 2/24 in his four overs. But Axar Patel had impressed even more conceding only 10 runs in his four-over spell.

Moreover, the lef-arm spinner also picked crucial wickets of Liam Livingstone and Jitesh Sharma. The latter was the only batter who seemed to be taking the game away from DC with 32-run knock but Axar pinned him in the front of the stumps in the 13th over itself to end PBKS’ hopes of posting a good total on the board.

On the other hand, while Kuldeep bowled well, he sent packing two of the lower-order batters - Kagiso Rabada and Nathan Ellis. Axar had better economy rate and also scalped a couple of prized wickets but even then he didn’t get the POTM award which left the fans questioning the logic as well.

However, Kuldeep was generous enough to share his player of the match award with his teammate. He thought Axar deserved it more than him as he picked important wickets for the side. “I would like to share this award with Axar. He bowled well and took important wickets in the middle,” Kuldeep said in the post-match presentation ceremony.

As for the match, after the bowlers did a perfect job for Delhi Capitals, David Warner set the stage on fire with his batting. He smashed an unbeaten 60 off just 30 deliveries while Prithvi Shaw scored 41 off 20 to stitch 83 runs for the opening wickets in just 6.3 overs. They eventually chased down the target in the 11th over to improve their NRR big time.

Meanwhile, the fans didn’t see any logic in Kuldeep getting the POTM award ahead of Axar on the day.

Here are some of the reactions:

Absolutely right. Well done, Kuldeep. 😊🥳 Expected nothing less from you. But who picked the POTM award is a mystery 🙋‍♂️ Axar had to win this one. https://t.co/4J9640fctv

Axar took Livingstone in POWERPLAY when game was in balance: 44-2 in 5

HOW ON EARTH did Kuldeep win MOM ahead of Axar?

How is Kuldeep the PoTM ahead of Axar?

Not only Axar had better figures (2-10 as opposed to 2-24), but he dismissed Livingstone & Jitesh, while Kuldeep dismissed Rabada & Ellis.

But because it's KP, I am not surprised the award has been given for 'attitude'.

Giving more preference to UP guy over Gujaratis is clear indication that Yogi will takeover Modi in 2024. It’s a beginning !

On what basis the M.O.M awards are given in @IPL ...
Kuldeep instead of Davy or Axar 😶😑😐#DCvPBKS #PBKSvDC @CricCrazyJohns @hershybru @cricbuzz

How did Kuldeep get the POTM? 👀 Axar took 2/10 and middle-order wickets. Kuldeep 2/24 and tail-ender wickets 🤔#DCvPBKS

Couldn't understand why Kuldeep was given the MOTM award, and not axar😶
Kuldeep: 4-0-24-2
Axar: 4-0-10-2
Bapu not only gave less than half runs than Kuldeep but also took important wickets of Livingstone (we know how important he is) & Jitesh (the way he was batting)

But the man of the match - Kuldeep Yadav.

Today’s player of the match award shows why the award winner needs to be picked by someone sensible. Axar got two important wickets for 10 runs, Kuldeep got 2 tailenders for 24. These awards have value. Don’t demean them by picking the winner out of a hat #DCvPBKS #IPL2022