India vs South Africa: Philander believes visitors still in “with a shot” on Day 5

South Africa’s most experienced pacer Vernon Philander on Saturday said his team is still “within a shot” of winning the first Test against India and backed his batsmen to emulate their first innings effort on day five here. In response to India’s 502/7 declared, South Africa exceeded expectations by scoring 431 in their first innings. […]
By PTI Sat, 5 Oct 2019 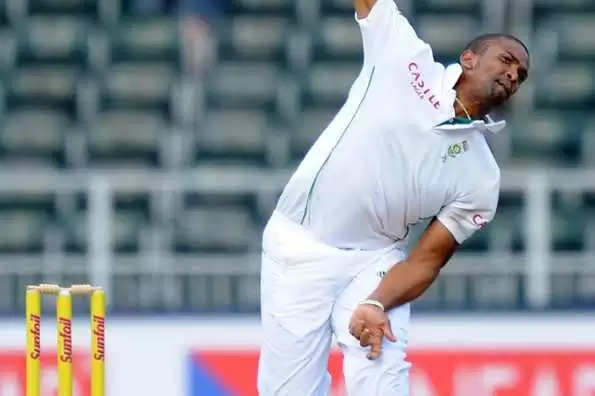 South Africa’s most experienced pacer Vernon Philander on Saturday said his team is still “within a shot” of winning the first Test against India and backed his batsmen to emulate their first innings effort on day five here.

In response to India’s 502/7 declared, South Africa exceeded expectations by scoring 431 in their first innings. At stumps on day four, they were 11 for one, needing another 384 runs for an improbably victory.

“I still think we are in with a shot. They played really well, myself, KG (Rabada) all started well. Taking 70 runs lead we would have taken it as they scored 500 runs. Hopefully we come ready tomorrow, bat well and take it real close,” said Philander, referring to the 71-run lead they conceded to India.

India declared their second innings at 323/4 in the final session and eventually South Africa batted nine overs before stumps instead of the scheduled 13.

Did India play it too safe by declaring when they did?

“Depends on how you look at it. There is a bit there for the spinners but in saying that we batted 130 overs in the first innings. So they had to make sure of that they get enough runs on board first of all,” Philander said.

“No game is a safe game. It’s a good wicket, the batters are in good form and hopefully we can get a good start tomorrow and set up for later on in the day.”

First innings centurion Dean Elgar was the only South African to get out towards the end of final session. Philander expects others in the team to rise to the occasion.

Asked to comment on Rohit’s second hundred in first match as Test opener, Philander said: “I think it’s difficult to compare when you play at home to when you play abroad, it’s a different ball game. But he scored the runs, what more do you want? All the best to him.”

South Africa are going through a transition after the retirement of senior players including AB de Villiers, Dale Steyn, Hashim Amla and Morne Morkel.

Philander said the youngsters in the team bring a lot of excitement to the table.

“When you have young and fresh ideas, the guys tend to play the way they play and you get a different perspective of where the game is moving to. You got obviously some of the older guys,” he said.

“Quinny (de Kock) is obviously not so old but he is one of us now. So I think it just brings fresh energy, new energy and the guys are really enjoying it.”

Asked what’s the difference between a year earlier and now, Philander said, “I think a couple of years back, we were a very conservative team. These guys are playing a lot more exciting brand of cricket.”