In an Instagram live session with Bangladeshi opening batsman Tamim Iqbal, Indian captain Virat Kohli credited the success of the Indian batsmen in playing quick bowlers all around the world to D Raghavendra, the throwdown specialist who has worked tirelessly with the Indian team since 2013. Raghavendra, who clocks speeds of 150-155 km/h with the […]
By CricXtasy Staff Tue, 19 May 2020 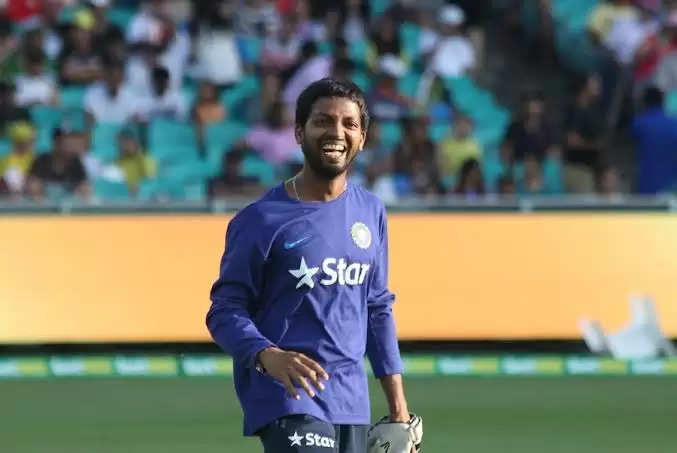 In an Instagram live session with Bangladeshi opening batsman Tamim Iqbal, Indian captain Virat Kohli credited the success of the Indian batsmen in playing quick bowlers all around the world to D Raghavendra, the throwdown specialist who has worked tirelessly with the Indian team since 2013. Raghavendra, who clocks speeds of 150-155 km/h with the sidearm, an equipment shaped like a long spoon, with its far end designed to hold and hurl the ball at great speeds, gives the batsmen an added boost when going out to bat in a Cricket match, according to Kohli.

This was what Kohli had to say about the throwdown specialist.
“I believe the improvement this team has shown while playing fast bowling since 2013 has been because of Raghu. He has good concepts about footwork, bat movement of players. He has improved his skills so much that from sidearm he easily hurls the balls at 155 kmph. After playing Raghu in nets, when you go into the match, you feel there is a lot of time.”

Kohli said he never had self doubts at any time, including while engineering those big chases in high-pressure international matches.

“To be honest, I never doubted myself in game situations. Everyone who is human has doubts and weaknesses. Have their negatives. So in practice during tours, if you haven’t had a good session you feel you don’t have that flow. Yes, doubts creep in then and it’s at the back of your mind. Key is to keep going and get into that zone till you feel that it was just distraction. If I believe I am good enough, then I am good enough. Best part about match situation is that you don’t need to think so much. You react to situations knowing your role. Negative voices always come off the field when you are not in competition mode.”

The master of run chases, Kohli said in his childhood, while watching India’s run chases, he would often go to sleep thinking that he could have helped the team to victory.

“Honestly, when I was a kid, I used to watch India games and see them lose I would go to sleep thinking I could have won that match. If I am chasing 380, I never feel that you can’t achieve it.”
Kohli then went on to give an example of how he approaches steep run chases with the help of the run chase of 321 against Sri Lanka at Hobart in the CB ODI Tri Series back in 2011/12. He said, “In 2011 in Hobart, we had to chase 340 in 40 overs to qualify. At the break I told (Suresh) Raina that we will approach this match as two 20 over games. 40 overs is a big duration. Let’s first play 20 and see how many runs are scored and then play another T20 game.”

Kohli went on to talk about the nuances he had to make in his batting from the early days, when he used to go over the top of the field more often with his shots. He said, “I changed because I wanted to hit all around the ground. The static position was making my options limited. My basic funda of batting is that if your hips are in perfect position then you can play any shot. Static position wasn’t working well for me. But it works for a lot of players. Like Sachin Tendulkar had a static stance all his life and he never had a problem. His technique was far superior with excellent hand eye coordination. For me I had to change it accordingly to suit my needs. I tried little, little things in my batting as you would never know if you don’t try.”
“So my advice is even if you try a lot in practice do try out new things in one or two games to check if it works or not. Because if you execute it under pressure in match situations then you get a different kind of confidence. Practice prepares you but execution in match makes you confident.
Key is to have an open mind when it comes to improvising. I hear a lot of players say this is my natural game and I play like this but if opposition figures you out, you have to improve and stay a step ahead. Learn, process information and execute.”

Kohli then went on to talk about his views on preparing for matches, revealing that the only set  routine he follows is when it comes to his diet and fitness. According to him, knowing how much time one needs to spend in the nets can also be attributed as a skill.
He said, “In case of batting if you are not in good form, you like to spend more time in the nets until one session which you will yourself know was a perfect net session. After that I don’t spend more than 10 minutes. Then I take throwdowns. Once you are in touch you shouldn’t overdo net sessions as you will create bad habits. Once you have a perfect net session you tend to think you can hit any shot. And in that process, the body shape goes awry and you would be frustrated. So all your work will go down the drain. Let me tell you, just like you know how much to train, you should also know when to get out of the nets because that’s also a skill. But it’s an individual thing as if you see Pujara he will bat for three hours. Everyone knows how to play cricket but sometimes we complicate it by thinking too much.”