Bangladesh’s Under-19 World Cup win: A result of hard-work and the process of two years

“It’s a dream come true. It’s all about the hard work we have done over the last two years,” was how Bangladesh Under-19 skipper Akbar Ali started his post-match presentation chat after the Under-19 World Cup win with cricketer-turned-commentator Ian Bishop. We tend to recognise the team’s run in the tournament and fail to look […]
By Sahil Jain Mon, 10 Feb 2020 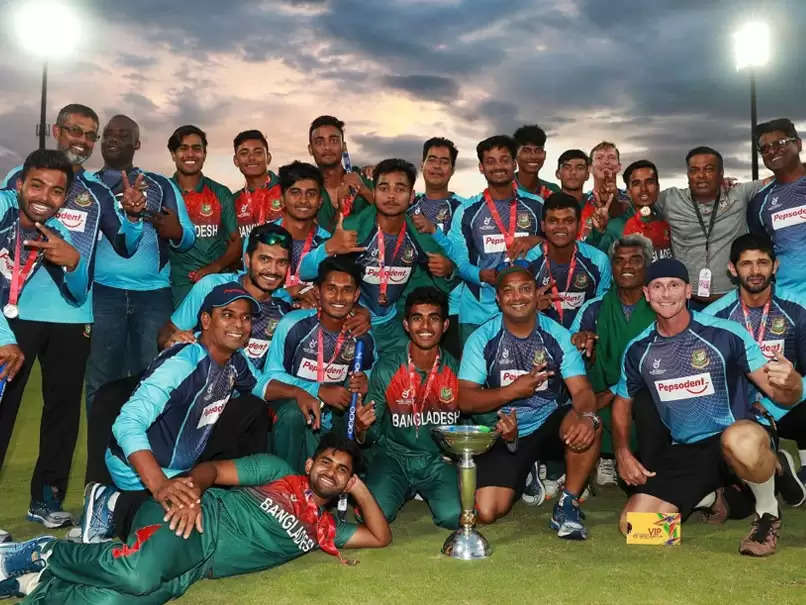 “It’s a dream come true. It’s all about the hard work we have done over the last two years,” was how Bangladesh Under-19 skipper Akbar Ali started his post-match presentation chat after the Under-19 World Cup win with cricketer-turned-commentator Ian Bishop.

The Under-19 World Cup comes around every two years and the process for the next one begins soon after the previous one ended. And the way Bangladesh have prepared for this 2020 edition was remarkable. Not a lot of people followed them or kept an eye on them. They quietly went about their business, building a core, building a side for this mega event. And the Bangladesh Under-19 team management did that as soon as the end of the 2018 tournament.

Let’s dig into numbers straightaway. Only three teams played more than 30 or more games between the two World Cups. Bangladesh were the third team to do so. They exactly played 30 games and you’ll see that their core played a number of games together.

Skipper Akbar Ali led them in every single game. Bangladesh identified their skipper long ago and back him. There are six others apart from the captain who played 25 or more games between the two World Cups. There were four other who played between 20 and 22 games. That underlines the fact that Bangladesh identified their core pretty early in the piece. And they were backed consistently.

Not just that, they were one of the most consistent sides as well. Only two teams had a win-loss ratio of more than 2. One was India and the other was Bangladesh. The latter won 18 out of the 30 games they played and lost just eight (one tied and three no result). They were coming into the tournament as the second-best team in terms of preparation and results.

Even in this Under-19 World Cup, they played like champions. Bangladesh dominated almost every game they played. Irrespective of the opposition or the stage of the tournament, they were on top almost every time. There were only two games, including the final where they were in trouble.

Moreover, Bangladesh found different players in different games. Be it Rakibul Hasan’s big wicket-taking spells or at least one batsmen (Parvez Hossain Emon, Tanzid Hasan, Mahmudul Hasan) from the top-order standing up and delivering every game or even the skipper leading from the front in the final. Bangladesh had different heroes in every game.

They had a couple of excellent results to start with as they humbled Zimbabwe and Scotland in the group stages before getting away with a poor game. They were down at 106/9 against Pakistan before rain saved the day for them and Bangladesh got away with one point and in the end, topped the group. However, apart from that, there was no hiccup. They beat South Africa and New Zealand convincingly in the two knockout games – they batted first in one and chased in the other and did in style. They even played the final against India like champions as well and were on top for a major part of the game.

Yes, there were nervy moments in their chase. At times, 178 looked too far away but they had their captain guiding the ship. He was absolutely calm and composed. Ali showed nerves of steel during his unbeaten knock of 43. He walked into bat when there was hara-kiri going on. Ravi Bishnoi had run through the Bangladesh top-order and opener Parvez Hossain Emon had walked off due to cramps. Bangladesh were in disarray. But he was the one leading the way.

It didn’t matter to him if wickets fell at the other end or the Indian bowlers were at his face. Ali was absolutely motionless and gritty. He was determined to take his side over the line. He hadn’t got big scores throughout the tournament but when it mattered, he was standing and stepping up, taking blows and delivering them too in the big final.

The way he batted was simply outstanding. The composure he showed. There was a time when he couldn’t score a single run off his bat for nearly five overs. It didn’t bother him. Ali kept going because he knew he just had to play time and India would crumble losing overs from their best bowlers. He farmed most of the strike once the seventh wicket fell. Bangladesh needed 35 runs when Emon was out but Ali played out 36 out of the 61 balls in the unbroken eighth-wicket partnership and did most of the scoring as well.

He calculated which Indian bowler has how many overs left and kept persuading the umpires to take them off when the drizzle started. But even when the umpires didn’t budge, it didn’t really affect his game as he kept defending and once in a while the scoreboard kept ticking. The Bangladesh skipper was constantly talking to his partners as well, calming them down, helping them blunt out the Indian bowling attack and also their sledges at times.

You don’t often deem an innings of 43 which came off 77 balls as world-class. But if there was one, Ali’s innings was very close to one.

Like Ali, it was Bangladesh who showed grit throughout the tournament. There’s absolutely no doubt India were the powerhouse and dominated the entire World Cup. Even in the lead-up, they were the strongest side and no other team showed such consistency.

But the Bangla boys were better on the big day. The process and preparation was simply fabulous. We talk about Rahul Dravid putting up a system in place for the Indian Under-19 side. There was a similar process Bangladesh followed as well. Identify a core group early, let one leader take charge and build the team over a period of two years and let the results take care of itself.

Things might’ve gotten ugly with the celebrations and the altercations with the Indians. You’d think that it’s the nature of Bangladesh cricket and their celebrations. They tend to get carried away and have an ugly history of celebrations. But let’s not get there and let that take away the limelight from what has been a fabulous win.