Mukesh Kumar ran through Karnataka’s second innings with a career-best six-wicket haul as Bengal hammered their star-studded opponents by 174 runs at the Eden Gardens to enter their first Ranji Trophy final in 13 years on Tuesday. The low-profile pacer, who had dismissed India regular K L Rahul in Karnataka’s first innings, became the hero […]
By PTI Tue, 3 Mar 2020 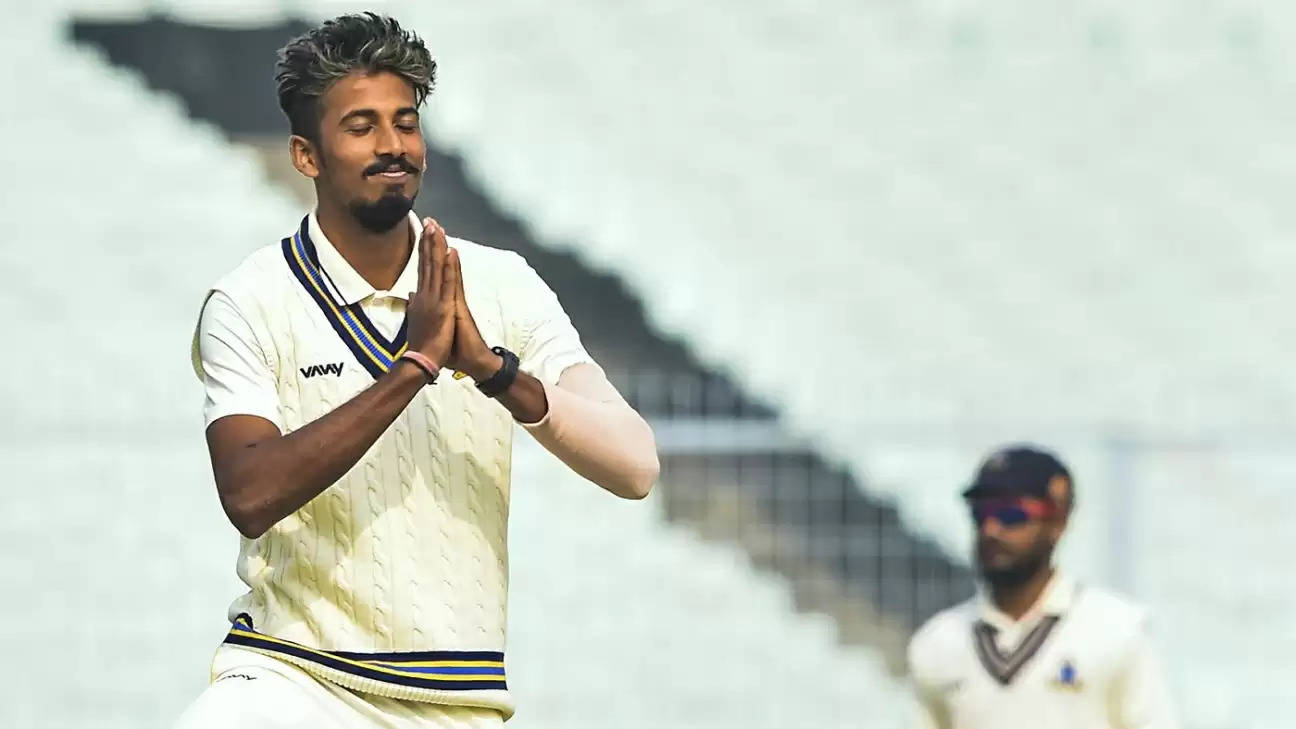 Mukesh Kumar ran through Karnataka’s second innings with a career-best six-wicket haul as Bengal hammered their star-studded opponents by 174 runs at the Eden Gardens to enter their first Ranji Trophy final in 13 years on Tuesday.

The low-profile pacer, who had dismissed India regular K L Rahul in Karnataka’s first innings, became the hero in the second essay with his 6/61 as Bengal took less than two hours to dismiss Karnataka on day four.

Resuming their monumental chase of 352 at 98 for three, Karnataka lost their remaining seven wickets for 79 runs in 16.3 overs. The penultimate day’s proceedings lasted just 115 minutes after which the hero-of-the-day Mukesh Kumar was seen carried on his shoulders by Akash Deep.

Bengal, who won their previous Ranji title during Sourav Ganguly’s debut season way back in 1989-90, had lost to Mumbai by 132 runs in their last final appearance in 2007.

Bengal will face the winners of Gujarat and Saurashtra clash, underway in Rajkot, in the final from March 9 and it will be an away match for them.

Bengal also halted a third treble bid by Karnataka who recently were crowned the domestic one-day (Vijay Hazare Trophy) and T20 (Syed Mushtaq Ali Trophy) champions. Karnataka’s last treble had come in 2014-15 when they had achieved the feat twice on the trot.

Mukesh Kumar, who had previous best figures of 6/62, looked at his ominous best taking five wickets in just 60 balls with an imperious spell that read 9-4-28-5.

He opened his account in the third over of the day with India batsman Manish Pandey (12) edging it to Shreevats Goswami behind the stumps.

Then in his next over he dismissed K V Siddharth (0) and S Sharath (0) off successive deliveries to snuff out any revival hopes by heavyweights Karnataka.

First the inform Siddharth fell to an away going delivery and was caught by skipper Abhimanyu Easwaran at the slip, and on the next ball Mukesh bolwed an inswinger to trap the wicketkeeper-batsman.

Talented 19-year-old Karnataka batsman Devdutt Padikkal, who was season’s leading run-getter in white ball cricket, was the lone crusader as Karnataka battled to avoid a third semifinal defeat in a row.

Padikkal, who came in at No 3 to accommodate Rahul at the top, hit seven elegant boundaries but Mukesh had his say to dismiss the batsman en route to his fourth five-wicket haul from 21 first-class matches.

Krishnappa Gowtham (22) and Abhimanyu Mithun counter attacked Bengal with a quick 24-run stand for the eighth wicket but it only delayed the inevitable with first innings hero Ishan Porel breaking the partnershi.

Gowtham tried to smash Porel’s widish delivery over the off-side region, only to be caught by substitute Shreyan Chakraborty.

And what followed was a noble gesture by Bengal’s man-of-the-match Anustup Majumdar, who had turned it around for the home side with his unbeaten 149 in the first innings. Put in, Bengal were 67/6 but Majumdar’s second successive century took Bengal to a match-winning 312.

Known for his unique celebrations, the 21-year-old Porel, who is the youngest member of the side, was given a shoe-shine polish by 35-year-old Majumdar, the seniormost member showing the camaraderie in the side.

Thereafter it was just a matter of time before Akash Deep (2/6) cleaned up the big-hitting Abhimanyu Mithun (38) to complete the victory.

Ishan Porel, who grabbed a five-wicket haul in the first innings, took 2/58 that included the prized-scalp of Rahul with peach of an inswinger on Monday.

Playing without the suspended pacer Ashok Dinda, their leading wicket taker for last eight seasons, the three-pronged Bengal pace attack once again was up for task, taking all the 20 wickets on offer.