Curtis Campher: From Johannesburg to Dublin, an Ireland star in the making

It seems like the Ireland batting line-up just hasn’t turned up in England so far. In the two games that they’ve played in the ODI series so far, it looked like they’re going to get bowled out for under 120. They were 28/5 and eventually, 79/7 in the first game. In the second, it was […]
By Sahil Jain Sun, 2 Aug 2020 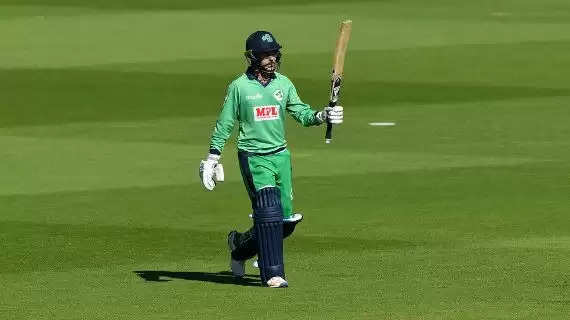 It seems like the Ireland batting line-up just hasn’t turned up in England so far. In the two games that they’ve played in the ODI series so far, it looked like they’re going to get bowled out for under 120. They were 28/5 and eventually, 79/7 in the first game. In the second, it was 44/4 and 91/6.

But it was one man who saved Ireland from the blushes on both occasions – Curtis Campher. Only two Irish players have scored more than 30 runs in this series so far and Campher is leading the way. Coming into bat at 28/5 and 78/5 in the two games, the 21-year-old played a couple of excellent knocks under pressure. From those situations, he took Ireland to 172 and 212 as he scored 59 (not out) and 68 respectively. It was because of Campher that the Ireland bowlers had at least a little to bowl at.

Not only with the bat, but he has also been very good with the ball. He has picked up three wickets in two games and has showcased his ability with the ball too. He has been Ireland’s best player by a long way. Every time Ireland have been in trouble (with bat or ball), Campher has come to their rescue. In fact, he is just the 8th player since 2000 to have an average difference between bat and ball of more than 100 in an ODI series. He averages 127.00 with the bat and 25.33 with the ball in this series.

Curtis Campher of @Irelandcricket is in a rare club

Since 2000, only 8 players (a few twice) have scored two fifties and taken 3 wickets at least in a series while maintaining the difference between batting and bowling average > 100.

The 21-year-old all-rounder has been put under pressure in these two games and he’s come out with flying colours. He showed great application and led the way for the other Irish players to follow. And he hardly has played any cricket at the domestic level. Yet, he has delivered and that shows the quality and temperament of the player.

“It was as good a debut as I’ve seen in an Irish shirt in the last number of years, and it’s a huge positive to take. I thought it was very impressive for a guy who’s not even played a game in Ireland yet to come in as a 21-year-old and put in a performance like that,” was how Ireland skipper Andrew Balbirnie described Campher’s performance in the post-match press conference after the first ODI.

It’s a remarkable fact that Campher hasn’t played a single professional game in Ireland yet. And that is due to the fact that the pace-bowling all-rounder was born in South Africa. The Johannesburg-born cricketer had even represented South Africa Under-19 in a handful of games post the 2018 Under-19 World Cup.

In fact, about two years ago (in July 2018), he even came down to England as a part of South Africa’s Under-19 team. He played a couple of games on that tour and took three wickets. He also scored an unbeaten 43 in a losing cause. Moreover, he even dismissed Tom Banton when the latter was a part of the England Under-19 side. And now, he has gone on to dismiss Banton twice in two games again.

However, Campher didn’t get opportunities at the domestic level. It was Ireland’s visit and Niall O’Brien who put the seed of switching in his mind. Ireland were in Pretoria in early 2018 when O’Brien spotted Campher’s talent. The Irish team who were due to be in Zimbabwe for the ICC World Cup Qualifiers were playing a game against Easterns and Northerns Combined XI before that tournament. In that game, Campher impressed with a 39-ball 49 which prompted O’Brien to have a word with the then 19-year-old.

The Ireland veteran knew about Campher’s Irish roots and convinced him to move. “Niall O’Brien said, ‘Listen you’re a good player, I will chat to you after the game.’ And that is where one thing led to another,” the Ireland star from the first two ODIs was quoted saying to the BBC.

And it was earlier this year that Campher moved to Dublin. He didn’t play a single club game either. Before making his ODI debut, he played all of four games – one List ‘A’ and three T20s, all of which came for Ireland ‘A’ when they toured South Africa and played Namibia in T20s and One-Day games. In of game he played, he made a contribution of some sort, either with the bat or ball.

And he has just carried that onto the international arena. Batting under pressure, picking up key scalps and contributing in the field too. And we haven’t seen the other gear to Campher’s game, especially with the bat. In both ODIs that he batted, Ireland were in big trouble and he had no choice but to put his head down, arrest the slide and try to bat out the 50 overs. But he has a different gear to his batting.

Take the (only) two T20s innings he’s played against Namibia earlier this year. In his first T20 innings, he made a 33-ball 45 laying the foundation for the 196 that Ireland ‘A’ scored. In the second, it was his 31-ball 62 that helped his side hunt down 2017 with an over to spare. He was expensive with the ball even though he picked up a couple of wickets. But there is a lot of promise.

For a player who hadn’t made his List ‘A’ or T20 debut until earlier this year and barely playing any competitive cricket at a considerable level for about 18 months, and then playing just a bit of ‘A’ cricket before the big international games, Curtis Campher has proved he is here to stay. From Johannesburg to Dublin, there is absolutely no doubt that Ireland have a star in the making.