Did South Africa miss a trick by not including Keshav Maharaj at the Wanderers?

South Africa is probably in the worst phase of its cricketing history. Racking up another embarrassing series defeat at home against an opposition which came into the series as an unsettled side would be adding to its pain. The whole country, which believed that the new management would reap new fortunes, were left disappointed. But […]
By Rishikeshwaran CA Thu, 30 Jan 2020 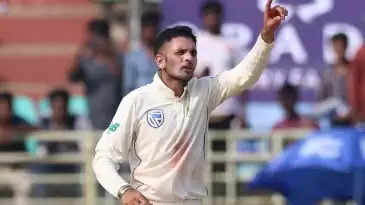 South Africa is probably in the worst phase of its cricketing history. Racking up another embarrassing series defeat at home against an opposition which came into the series as an unsettled side would be adding to its pain. The whole country, which believed that the new management would reap new fortunes, were left disappointed. But did South Africa miss something that could have helped them save the final Test?

A lot has been talked about South Africa’s approach to batting in this series. It looked as if the batsmen were just looking to stay there and had no intentions of scoring runs. However there seemed to be an intent in their play in the final innings of the last Test. So could a better bowling performance have made a difference to the result?

South Africa lost the match by 191 runs and 164 runs were scored by English batsmen batting at no. 8 or lower in the match. The English tail was allowed to wag too much in this match. Did South Africa miss a trick by not picking Keshav Maharaj for the final Test? Could he have made a difference?

The absence of Rabada made it difficult for the Proteas to wrap up the tail. But they still had the option of playing Keshav Maharaj, their premier spinner. Maharaj has an average of 13.79 and a whopping strike rate of 26.84 against batsmen batting at number 8 or lower. One could argue that the pitch would have prompted the Proteas to field an all pace attack. But it would still be a silly option to not include your lead spinner when you have an inexperienced pace attack.

Including a spinner could influence the performance of the pacers as well. A spinner helps in giving some breathing space to the pacers who cannot keep bowling long spells. The control that a spinner brings in might prompt a batsman to take on the pacers at the other end increasing the chances of picking wicket.

The South African pacers have an average of 23.40 and an economy rate of 3.10 when Maharaj is in the playing eleven. Since Maharaj’s debut, in matches where South Africa played without a single spinner, these numbers drop down to 26.08 and 3.48 respectively.

Also in matches where Maharaj has not played, the pacers have an average of 25.05 and an economy rate of 3.38. The drop in these numbers is not too significant as their pace attack consisted of at least three among Steyn, Morkel, Philander and Rabada in all but two (including this match) of these matches. But again, what South Africa had in this match is an inexperienced pace attack. Rabada was suspended due to disciplinary actions and did not play. Philander was at the twilight of his career. Beuran Hendricks was making his debut. The other three were playing their second, third and sixth Test matches.

Incidentally South Africa had failed miserably in the other match too where they opted for an inexperienced pace attack over Maharaj. The combined average and strike rate of the South African pacers in these two matches are 36.42 and 56.83. These numbers clearly indicate the importance of Maharaj in the Proteas side.

Maharaj is a key element to the South African red ball setup. With Rabada left unable to play, not playing Keshav Maharaj looked like a silly decision. He may not have won the match for them singlehandedly but could have given the Proteas an opportunity to at least go down with a fight.