England vs West Indies 2020: Takeaways from the Test series

It was the first international series since the COVID-19 pandemic broke out and it is England that came out victorious. West Indies started with a bang and promised a lot as they went 1-0 up after the first Test at the Ageas Bowl in Southampton. However, West Indies faded away as the series progressed and […]
By Sahil Jain Wed, 29 Jul 2020 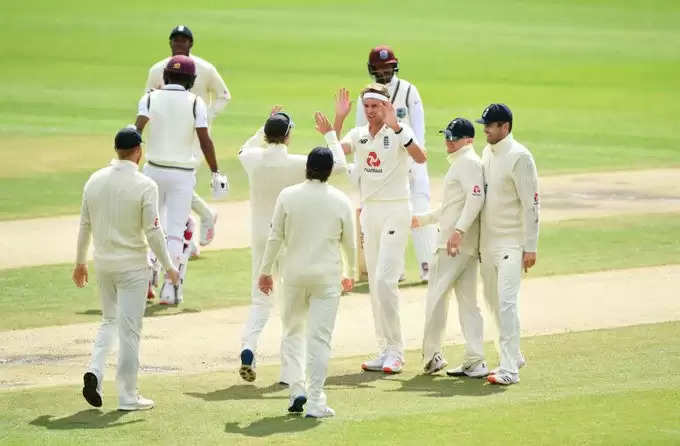 It was the first international series since the COVID-19 pandemic broke out and it is England that came out victorious. West Indies started with a bang and promised a lot as they went 1-0 up after the first Test at the Ageas Bowl in Southampton. However, West Indies faded away as the series progressed and England proved to be too good as they reclaimed the Wisden Trophy, by winning the three-match Test series 2-1.

Ben Stokes topped the run charts in this series as he amassed 363 runs at an average of 90.75. He even took nine wickets and there’s no doubt he was one of the best players in the series. Stuart Broad ended up as the leading wicket-taker – 16 wickets. Shannon Gabriel picked up the most wickets for West Indies in this series – 11 wickets while Jermaine Blackwood was the leading run-getter for West Indies – scoring 211 runs.

So, what were the takeaways from this series? Well, let’s take a look.

International cricket back on its feet

Playing in bio-secure bubbles, check. No crowd, check. No saliva on the ball, check (well, barring an odd instance here or there, it was all fine). Cricket live again, a double-check.

International cricket is back on its feet. After 117 days, international cricket was back on the park after a forced break due to the COVID-19 pandemic. There were some changes and some question marks. However, this series defined on how cricket might be played in the near future. It showed that cricket is possible without saliva on the ball, without the crowd and with some social distancing and bio-secure norms.

Even since Cook’s retirement after the India series in 2018, England never had two of the same openers. They had seven different opening pairs with Burns being a constant and featuring in five of them. The top-order was definitely in a big mess.

However, Rory Burns and Dom Sibley have shown a lot of promise a lot in recent times. The duo opened together for the first time in New Zealand. Their first five partnership scores read – 52, 48, 11, 11, 92 before Burns was injured and ruled out of the South Africa tour.

Despite being out injured, Rory Burns had gained reputation of being a bankable opener over the course of the last year and a half. Dom Sibley came to the fore last winter and showed he can be a reliable option as well. And the duo showed their talent and ability in this series. It wasn’t until the last innings of the series that the duo scored big runs together but if one failed, the other got stuck in and did the job.

As a pair, they got 216 runs from five innings which is fair and a decent start. When they put on 114 in the second innings of the third Test, it was the first time since 2016 that an England opening pair had a 100+ opening stand. Moreover, that 100+ stand was just the second instance of the England opens putting on a century partnership since Cook’s retirement. Both players got more than 200 runs this series and the duo may well have put an end to England’s top-order woes.

With the likes of Shimron Hetmyer and Darren Bravo opting out of this tour, West Indies had an inexperienced and fragile batting line-up. That was one big weak link in the West Indies line-up and it was exposed badly. However, there were a couple of positives.

Shamarh Brooks and Jermaine Blackwood made an impact. It may not have been a big one but they certainly put a case forward for being in the starting Test XI from now on. While Brooks batted at 4, Blackwood batted at 6 and the two were largely the big plusses from this series for the men from the Caribbean. In this fragile West Indian batting line-up, they were the ones who looked pretty assured and looked like getting a big score.

Before this series started, Blackwood had last played international cricket back in October 2017. After a poor run of form, he was dropped and barring an appearance as a concussion substitute last year against India, Blackwood was benched throughout. The Jamaican cricketer went back to domestic cricket and plundered runs. He emerged as the top run-scorer in the 2019-20 four-day domestic season in the Caribbean. He showed that he wasn’t a flash in the pan and can adapt to different circumstances and not just be a basher.

Blackwood got his chance and he made an impact straight away. He smashed a fine 95 to lead West Indies to victory in the first Test. It wasn’t a fluke as he replicated his first Test performance with a gritty 55 in the second innings of the second Test. He scored a couple of 20s in the third Test to end with 211 runs, which was the most by any West Indian player in the series.

Meanwhile, Brooks just made his debut last year against India and scored just 63 runs in four innings, which also included a fifty. The Barbados batsman then went on to score an excellent hundred against Afghanistan late last year. He didn’t have a great domestic season, yet, West Indies stuck with him and it sort of paid off. Brooks scored a couple of half-centuries in this series and showed great temperament. He scored 195 runs and faced 402 balls, which is the most by any West Indian player in this series.

Hence, based on their form and performance in this series, Brooks and Blackwood might well define the West Indies middle-order in Test cricket in the near future.

Is there anything Ben Stokes cannot do?

For the first two Tests, England were largely about Ben Stokes. Be it with bat, ball, in the field or as captain, it was all Stokes. He was England’s best batsman and best bowler in the first couple of Test matches. He was the one dragging them into the game and putting them in winning positions.

And yet he's not even Player of the Series.#ENGvWI pic.twitter.com/PWKvpEiSK7

England had as many as six fast bowlers who featured in this series compared to the four that West Indies played. One big difference in this Test series was that the England fast bowlers were fresh every time they walked into a Test match. No England fast bowler played more than two games in the series. Compare that to the West Indies’ pace-bowling group. Three of them played all three games and the fourth one, Alzarri Joseph just missed the last game.

England had James Anderson, Stuart Broad, Chris Woakes, Jofra Archer, Same Curran and Mark Wood fit and firing. They were literally spoilt for choice. In fact, England played two different bowling attacks in the first two Test matches. Only Dom Bess (spinner) and Ben Stokes (all-rounder) were the constant. Thus, it made a significant difference and the England bowlers were able to deliver the goods.

Stuart Broad was left out of the first Test as England went with the extra pace of Archer and Wood along with the ever-reliable Anderson. Broad relieved that he was ‘angry, frustrated and gutted’. It was tough for him to digest and it fired him up. He came out all guns blazing in the last two Tests.

He bowled beautifully throughout the series and picked 16 wickets, including 10 in the third Test. After taking three wickets in each innings in the second Test, he took 6/31 in the first innings of the third Test before picking up 4/36 in the second. Broad even became the seventh bowler and fourth fast bowler to pick 500 wickets and ended the series with 501 wickets.

A look at all who have 400 or more Test wickets.

There is no way you can break the bio-secure protocols

A worldwide pandemic is at its peak and the United Kingdom has suffered as well. However, international cricket returned amidst this crisis and there were some strict rules and regulations that teams, players, support staff, broadcasters and everyone involved had to follow. A small breach might put everyone in jeopardy.

Two bio-bubble or bio-secure venues – Southampton and Manchester were picked. After the first Test at the Ageas Bowl in Southampton, players were expected to head straight to the Old Trafford in Manchester i.e. from one bio-bubble to another. But Jofra Archer decided to take a little detour and visit his home in Sussex. The Barbados-born England fast bowler was subsequently suspended from the second Test and was isolated.

Such a mistake could’ve cost the entire series and who knows it might’ve led to the cancellation as well. Thankfully, Archer tested negative for coronavirus and after five days of self-isolation, he resumed cricketing activities. Hence, there is no way anyone can breach or break the bio-secure protocols in any form.