His career batting average is 37.9. He has 10 Test centuries and 153 wickets in 65 Tests. Good numbers, obviously. But nothing over the top. Certainly not extravagant enough to be called a modern day great. Yet, that is exactly what Ben Stokes is. Measuring his value in stats would be as big a howler […]
By Rohit Sankar Sat, 18 Jul 2020 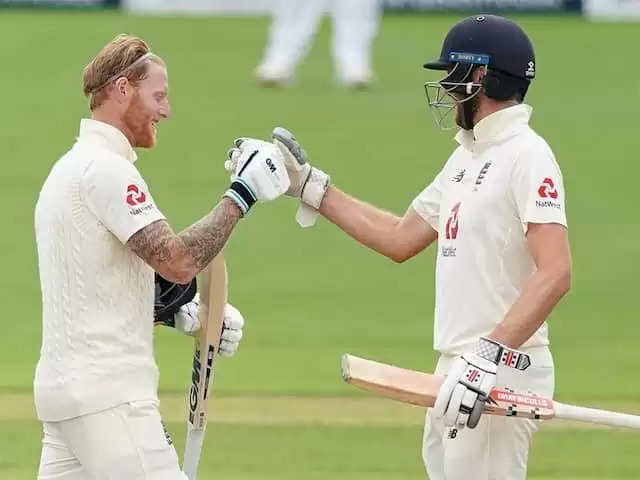 His career batting average is 37.9. He has 10 Test centuries and 153 wickets in 65 Tests. Good numbers, obviously. But nothing over the top. Certainly not extravagant enough to be called a modern day great. Yet, that is exactly what Ben Stokes is. Measuring his value in stats would be as big a howler as any. The Ben Stokes you see isn’t the Ben Stokes that his teammates see and it’s here that the numbers take a backseat.

As Stokes and Dom Sibley batted out over 500 balls in their partnership at Manchester on day 2, the camaraderie between the two was palpable. The two do share an exceptional equation, one that blossomed in Cape Town as Dom Sibley, with the weight of Alastair Cook’s 12,472 runs on his shoulders, crawled to his maiden Test hundred.

Ben Stokes, who was at the non-striker’s end for a while in that marathon knock including the time he reached his century, took the pressure off Sibley in their 92-run partnership, scoring 72 of those runs off a mere 47 balls. In his company, Sibley seemed to relax too, even unfurling a rare full-fledged sweep off the spinner to get to his hundred.

At the end of the game, he was effusive in his praise for Stokes.

“Stokes took the pressure off me. It made it easy for me to go at my tempo. He kept saying ‘play at your own tempo; don’t change what you’ve been doing.’ That meant I could just go about it in my own way,” Sibley said then.

That’s what Stokes brings to the England camp. Alastair Cook, who is stringent with his words, called Stokes the most selfless cricketer he had ever seen. Dom Bess, in an interview during the lockdown period, was awed by the aura of Stokes and the team player he was.

“To see how he [Stokes] goes about it is freakish. He always works hard but the big thing as well is he’s very much a team man. I think that rubs off really well on other blokes. And then to have that consistency, when people aren’t watching, you’re doing it genuinely for your side and helping people out, it’s a little thing but it goes a long way,” Bess said.

The crucial point is how Stokes influences his mates. He is extraordinary no doubt, but he doesn’t let the team remain ordinary either. It’s probably why he is the first man to step up in a crisis and lift his team up. It’s also perhaps why he wasn’t carried away after his World Cup heroics and in fact, lowered his strike rate to create a bigger impact in the Test side.

Ben Stokes since the WC in Tests averages 55.66 with four centuries and four half-centuries in 23 innings.

At Headingley, as he went about his outrageous match-winning final innings knock against Australia, Stokes was on 3 off 67 balls at one point and went on to make his slowest half-century. Of course, he would famously go on to pummel Nathan Lyon for a reverse sweep for six with the game on the line and finish unbeaten on 135 with a strike rate above 60. That’s just who Ben Stokes is. Changing gears comes naturally to him, yet he recognises the underrated passages of play where the game exactly changes.

After his controlled 176 at Manchester, Stokes stressed on the 300 balls he faced rather than the 176 runs he made. He was more eager to talk about the backing his team needed to give Jofra Archer than his own knock.

He doesn’t mince words, and isn’t shy of throwing a word or two to unsettle the opponent as Jermaine Blackwood understood at Southampton. But his biggest quality is perhaps not painting a false picture in strife. This most notably came to the fore in the World Cup when England had to beat India and New Zealand to qualify to the semi-finals after losses to Sri Lanka, Australia and Pakistan.

Stokes, shaken by the fact that England’s World Cup dream and hard yards put in between the 2015 event and the home tournament would collapse sooner than they thought, opened up to his mates.

“I am nervous, I am anxious, I am worrying about what happens if we don’t win. Believe me, I am worried,” Stokes said.

“As professional sportsmen at the top of the game we do have worries,” he says later in an interview with The Guardian. “We do think of the worst and that’s absolutely fine. There’s no weakness in feeling like that. That was such a crucial thing – for us all to sit down as a team and discuss. People started to open up. Once they vented their feelings it made everyone feel a lot better because, sometimes, you can feel as if you’re the only person thinking that way. But if you don’t get nervous you’re probably telling a little white lie.”

By helping his mates face reality, Stokes was able to trivialise the issue to an extent and give the team some much-needed vent-out space. It proved to be tournament-changing for England. The leadership mattered so much to him that he actually wrote to the ECB to reinstate him as the team vice-captain after the Bristol episode.

As he nudged, edged, blocked and drove his way to a non-spectacular hundred, slightly deviating to the spectacular when he on-drove Alzarri Joseph over long-on for a mind-blowing six, Stokes seemed to be someone who had come to terms with the reality of his talent. More importantly, he has perhaps understood that his role within the team is not just to bat, bowl, field or even lead, but inspire his mates and everyone around him to be better themselves.

There were unmistakable shades of confidence in Sibley’s strides at Manchester that seemed to stem from Stokes’ presence at the other end. Stokes’ value lies in the intangibles as he not-so-evidently showed at Manchester. If it’s not clear enough, it is perhaps because you haven’t followed the England cricket team or the comments from the camp closely enough.

Being boring is boring guys! But if it gets the job done it’s definitely worth it! We are all batting at 11 so let’s not get ahead of ourselves and start playing shots. Defend your stumps. One ball at a time and let Stokes do his thing #StayAtHome https://t.co/TLudq6gVcc

Jack Leach, during the time the pandemic peaked, put an interesting tweet where there were subtle hints about the way England players see Stokes – “Being boring is boring guys! But if it gets the job done it’s definitely worth it! We are all batting at 11 so let’s not get ahead of ourselves and start playing shots. Defend your stumps one ball at a time and let Stokes do his thing,” Leach wrote.

The point that is increasingly becoming clear is that if Ben Stokes does his thing, more often than not his mates do things too.