The much anticipated ICC U-19 World Cup 2020 is all set to get underway on 17 January in South Africa, with the hosts taking on Afghanistan in the opening fixture. 16 teams are divided into 4 groups and 2 teams from each group will proceed to the quarter-finals. As we get ready for the main […]
By Deepak Panda Thu, 16 Jan 2020 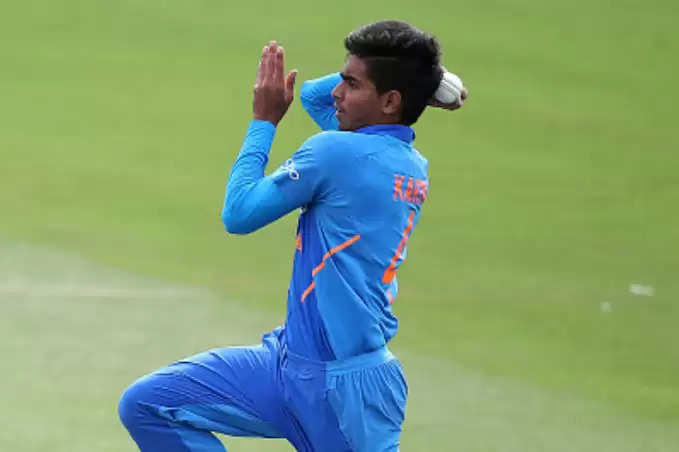 The much anticipated ICC U-19 World Cup 2020 is all set to get underway on 17 January in South Africa, with the hosts taking on Afghanistan in the opening fixture. 16 teams are divided into 4 groups and 2 teams from each group will proceed to the quarter-finals.

As we get ready for the main event, here is a round-up of the warm-up games:

Winning the toss, Sri Lanka decided to bat first. After the early wicket of Kamil Mishara, Paranavithana steadied the ship with a gutsy 68, followed by a late rearguard action by Shamaaz. Sri Lanka were bundled out for 197 with Merick Brett and Tiaan van Vuuren taking 2 wickets each. Opener Jonathan Bird fought with a valiant 71 but lack of support from others derailed the chase as they got all out for 182. Jack Lees kept the game alive with 46 off 70 balls. Amshi Oren was the top wicket taker with 2 wickets while six other bowlers picked one wicket each.

Zimbabwe elected to bat after winning the toss. But the decision backfired as the top order was dismissed cheaply. Tadiwanashe Marumani played the lone hand of 53 and helped Zimbabwe cross the three-figure mark. George Balderson picked 3 wickets and Scott Curie and Lewis Goldworthy picked 2 wickets each as Zimbabwe were all out for 119. However, England could bat just one over before rain ended any further chances of play.

Nigeria opted to bat after winning the toss, but Pakistan bowlers made life difficult for the Nigerian batsmen. Only 2 batsmen, Runsewe and Mba, managed to reach double digits. Amir Ali picked 3 and Abbas Afridi and Qasim Akram chipped in with 2 wickets each. A target of 110 proved to be cakewalk for Pakistani openers as Haider Ali single handedly batted Nigeria out of the game with a quickfire 38 before he retired out. Mohammad Haris and Muhammad Munir remained unbeaten on 18 and 14 respectively as Pakistan chased down the target in the 15th over.

Winning the toss, India decided to bat first. After the early wicket of Divyansh Saxena, Yashasvi Jaiswal forged a crucial partnership with Tilak Verma, with the duo scoring 69 and 55 respectively. This was followed by some late blitz by the lower middle order which helped India reach 255. Abid Mohammadi got 3 wickets while Fazal Haq picked 3. Afghanistan had a forgettable outing with the bat as they were skittled for a paltry 44 runs in just over 17 overs. Kartik Tyagi picked 3 wickets while Utkarsh Singh, Sushant Mishra and Krishnan Sridhar picked 2 wickets each. For Aghanistan, wicket-keeper Ishaq Shirzad was the only batsman to reach double digits with a score of 11.

Winning the toss, UAE opted to field. Opener Mariu scored a half-century (56) but UAE kept chipping in with wickets at regular intervals. Wheeler-Greenall and Keene scored 41 and 40 each to help New Zealand post a fighting total of 217. Sanchit Sharma and Rishabh Mukherjee picked 2 wickets each. Openers Aryan Lakra and Vriitya Aravind gave UAE a solid with a 92-run partnership. However the middle order faltered and the chase looked derailed until a late blitz by Muhammad Furazuddin (37* off 18) helped UAE win by 1 wicket in the last over. For New Zealand, skipper Jesse Tashkoff and Adithya Ashok picked 3 wickets each.

Openers helped Scotland off to a flier after opting to bat. A quick start by the openers was capitalized by Tomas Mackintosh as he scored a brilliant 103 before retiring out. Opener Ben Davidson aslo scored a quickfire 75 as Scotland posted a target of 326 for Japan. However, Japan looked terribly out of sorts as apart from the openers none of the other batsmen managed to reach double digits. Captain Thurgate top-scored with 33 for Japan. Charlie Peeth ran through the Japan lineup as he picked up 6 wickets for just 2 runs in his 5 overs which included 3 maidens.

Canada were off to a steady start as they opted to bat after winning the toss, Almost everyone who came out to bat chipped in with handy contributions but threw away wickets after getting starts. Akhil Kumar top-scored with 59 and Ayush Verma’s quickfire 42 helped Canada reach 271. West Indies got off to a terrible start as two of the top three batsmen got out for duck. However a 125-run sixth-wicket partnership between Antonio Morris and Nyeem Young helped West Indies get back into the game. Morris and Forde remained unbeaten on 96 and 23 respectively as West Indies managed to win with 3 wickets remaining.

Bangladesh decided to bat first after winning the toss. Helped by handy contributions by the entire batting order with 3 fifties from Shameem Hossain, Towhid Hridoy and Parvez Hossain, Bangladesh posted a competitive total of 250. Todd Murphy picked 2 wickets. In their chase Australia kept up with the run rate but kept losing wickets at regular intervals. Sam fanning top-scored with 46, followed by a 22-ball 44 from Corey Kelly which kept Australia on track of the chase. With 1 required to win off 44 balls and 2 wickets remaining, Australia looked all set to win until Shoriful Islam picked 2 wickets in consecutive balls and helped Bangladesh escape defeat. Shoriful was the top wicket-taker for Bangladesh with 4 wickets.

Winning the toss, India decided to bat first. After the early wicket of Jaiswal, steady knocks by Verma and Garg, followed by handy contributions from the lower middle order helped India reach 295. Nungu got 2 wickets under his belt with almost every other bowler chipping in with a wicket each. 3 fifties by Shumba, Oldknow and Schandedorf helped Zimbabwe be on track for the chase but lack of support from others derailed the chase as they got all out for 272. Kartik Tyagi was the wrecker in chief with 3 wickets, with Sushant Mishra and Ravi Bishnoi chipping in with 2 wickets each.

In a terribly one-sided contest Nigeria were humiliated by the hosts with a 8-wicket defeat. Opting to bat first after winning the toss, Nigeria skittled out for a paltry 61 in 37 overs, with Samuel Mba being the only batsman to reach double figures. For South Africa, Khumaro, Parsons, Brett, Modimokoane and van Vuuren picked 2 wickets each. South Africa chased down the target in the ninth over with the loss of 2 wickets. Skipper Parsons top scored with 48 while Abdulrasheed remained the lone wicket-taker for Nigeria.

After opting to bat, Afghanistan’ top-order faltered but some gutsy rearguard action by Abdul Rahman and wicket-keeper Ishan, followed by late cameo of Mohammadi helped them reach 205 in 50 overs. Blake Cullen with 3 wickets was the chief wicket-taker for England. The English batsmen got off to starts but none of them failed to convert the starts to big scores. Joey Evison top-scored with 37 as Afghanistan bowlers restricted England to 184. Fazal Haq picked 3 wickets while Abdul Rahman, Noor Ahmed and Shafiqullah Ghafari picked 2 wickets each.

Opting to bat first after winning the toss, Sri Lanka lost wickets at regular interval until the lower middle order showed some resistance with skipper Nipun and Sonal scoring gutsy half-centuries. Tahir Hussain picked 4 wickets while Aamir Khan, Aamir Ali and Abbas Afridi picked 2 wickets each as Sri Lanka were all out for 215. A decent start by the openers followed by handy contributions from the middle order helped Pakistan chase down the target with 4 wickets in hand 28 balls to spare. Fahad Munir top-scored with 51 while Dilshan Madushanka was the primary wicket-taker for Sri Lanka with 3 wickets.

Putting in Bangladesh to bat first after winning the toss, New Zealand bowlers ran through the Bangladesh top order as three of the top four getting out without opening their account. Towhid Hridoy top-scored with 36 while Joey Field and Adithya Ashok picked 4 and 3 wickets respectively as Bangladesh bundled out for 112 in 29 overs. In reply New Zealand were reduced to 63/6, but skipper Tashkoff and wicket-keeper Sunde made sure New Zealand reached the target without any further casualty. Tashkoff top-scored with 41 while Tanzid Hasan and Raqibul Hasan picked 3 and 2 wickets respectively.

Opting to bat first after winning the toss, UAE got off to a steady start till captain Aryan Lakra retired out. The middle order faltered before wicket-keeper Kai Smith hit a blitzkrieg knock of 102* off 69 balls. Vriitya Aravind with 98 and Alishan Sharafu with 58 were the other top scorers while Ashley Thurgate with 3/40 was the best bowler for Japan. In reply, Japan were skittled out for 129, with wickets falling at regular intervals. Neel Date top-scored with 39 while Aryan Lakra picked 4 wickets for just 15 runs as UAE thumped Japan by 253 runs.

Opting to bat first after winning the toss, West Indies batsmen made merry off the Scottish attack. Melius (67) and Julien (65) scored fifties while Anderson (101* off 72 balls) scored an unbeaten hundred as West Indies posted 322 on the board. UAE kept losing wickets at regular intervals and never looked in for the chase. Uzzair Shah to-scored with 49 while Joshua James picked 3 wickets as West Indies won by 126 runs.

Canada never really looked set for a sizeable total after opting to bat first. Eshan Sensarma top-scored with 27 while Liam Scott, Todd Murphy and Corey Kelly picked 3 wickets each as Australia bowled out Canada for 114. After losing the early wicket of Fraser-McGurk, Oliver Davies went berserk with a 27-ball 94* with 11 sixes and 7 fours. Ayush Verma picked the only wicket for Canada as Australia chased down the target in just 7 overs.