Abu Jayed was buzzing as the Holkar Cricket Stadium went into radio silence. He had reached the striker’s end while running back pleading to the umpire. When the umpire was unmoved, Jayed, aka Rahi, animatedly turned to keeper Liton Das, who seemed unconvinced. Mominul Haque, Jayed’s captain at the East Zone side in the Bangladesh […]
By Rohit Sankar Fri, 15 Nov 2019 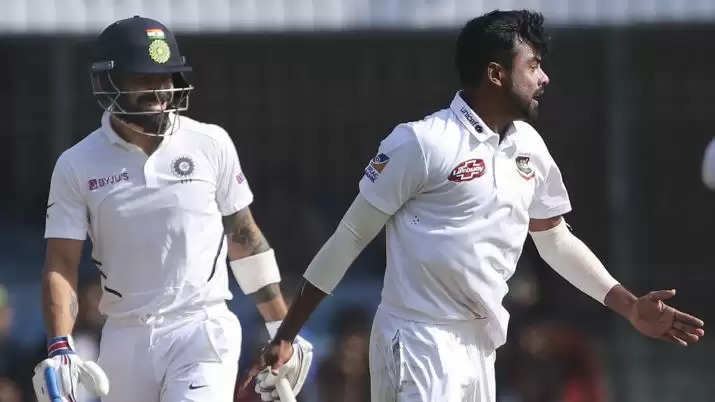 Abu Jayed was buzzing as the Holkar Cricket Stadium went into radio silence. He had reached the striker’s end while running back pleading to the umpire. When the umpire was unmoved, Jayed, aka Rahi, animatedly turned to keeper Liton Das, who seemed unconvinced. Mominul Haque, Jayed’s captain at the East Zone side in the Bangladesh Cricket League, though, walked up and checked once with his bowler before signaling the ‘T’ to the umpire.

Bangladesh’s review seemed more in hope of dismissing the one man that had tortured visiting sides in home Tests – this inclusive of his double ton against New Zealand at this very venue in the only Test it had hosted prior to this – than anything else, with the impact of the ball hitting the pads appearing outside the line to the naked eye.

But they were in for a massive surprise as the DRS returned with three reds. It sent the Indian skipper on his way back for a duck and for the third time in the innings, Abu Jayed had catapulted Bangladesh back into the contest.

The innings had begun in unceremonious fashion for Jayed. He sent his first delivery well outside the leg-stump but quickly corrected his line to keep things tight from his end. Even as Ebadot Hossain sent down the odd length ball to invite Mayank Agarwal for a drive, Jayed just stuck to his channels, giving nothing away to the batsmen.

Off his fourth over, Jayed got the result he was seeking from the onset. By keeping his length and line immaculate, the Bangladesh fast bowler – all of 6 Tests old – found the edge off a loose drive from Rohit. It is a known channel of attack against Rohit in any format, particularly for a swing bowler like Jayed. But it was also one that South Africa had fruitlessly tried to exploit – majorly due to a lack in consistency to land the ball over and over in that zone patiently.

That Jayed managed to do it showed Bangladesh had a special pacer in him. But like with all bowlers in Tests, the consistency factor had to be shown and Jayed did it on day two by prizing out three big names in India’s Test batting line-up before lunch through sheer brilliance. If Pujara was worked over by a fuller length ball that shaped away, a rare change in length by Jayed, Kohli was trapped in front by taking cue from Shami’s line of attack on day one.

A close look at Jayed’s pitch map shows that he had bowled only two deliveries – one of them to Pujara – fuller in the innings prior to the delivery that dismissed Pujara. If a rather proactive Che Pu was worked over, it was by this subtle, yet important change in length. In his next over, he sent back the big fish, Virat Kohli, and once again, it was a minor adjustment that did the trick for Jayed.

He moved wider of the crease – a tactic that Shami repeatedly used on day one to fetch his wickets – to bring the ball back in with the angle. A corker to receive early in the innings for any batsman, and Kohli’s bat face, which was closed, missed the ball primarily due to this change in angle.

Jayed is an outlier in Bangladesh’s new-gen list of players. In the last decade, there has been no pace bowler with more wickets at first-class level in Bangladesh than Jayed. Neither has anyone played more first-class games. But chances have been few and far between even after he got into the Test side. Known for his long spells, Jayed has been a mastermind at working over batsmen with his thought process in first-class cricket and it showed on Friday.

The last few months have seen Jayed pushed into no man’s land in Bangladesh cricket. He was not even mentioned by BCB President Nazmul Hassan when he mentioned players in a press briefing ahead of the World Cup squad announcement. But when the announcement came, Jayed had pipped Taskin Ahmed into the final 15 despite not playing an ODI prior to that.

What aided Jayed’s selection was his ability to swing the ball. Despite fitness concerns, the selectors backed Jayed and it seemed a bold call, but also one that would cause a lot of confusion soon after that. In the midst of the tri-series in Ireland involving Bangladesh and West Indies, rumours emerged that Bangladesh were looking to replace Jayed with Taskin owing to fitness concerns.

“He (Rahi) didn’t bowl for many times after the BPL for his injury. Local physio told us that this injury would take Rahi 3 or 4 days to be fit again and to continue bowling in the nets again. But things aren’t going well according to the news as Rahi is in the position to bowl again in the nets just today,” Bangladesh Cricket Board (BCB) chief selector Minhajul Abedin Nannu said on May 10th earlier this year. “We have to make change in the squad if there is any injury concern regarding to any player of the team. But Rahi will go with us as a 16th man and we’ll talk about it with the BCB president today (May 10)”, he added while stressing Taskin is set to replace Jayed in the team.

Two days later, Mohammad Saifuddin’s injury meant that Jayed was in the starting XI for the game against West Indies. He didn’t pick up a wicket then, but in the next match against Ireland went on to snare a five-wicket haul, the one spell that sealed his World Cup spot. But it did not translate into chances at the actual World Cup.

This is eerily similar to his fate in Tests when he is often part of the chopping and changing process despite doing reasonably well. In New Zealand last year, and against West Indies earlier this year, Jayed was among the pick of Bangladesh’s Test pacers. But he still wasn’t expected to start at Indore against India. This time, he has grabbed his chance and even amidst the fervour of Mayank’s sensational double hundred, Jayed’s spell and the promise it holds with a pink ball Test coming up, should encourage Bangladesh.