In his very first innings in Asian conditions, Keshav Maharaj bowled 17 overs in hot, humid conditions at Galle fighting off the sickness that kept him out of the warm-up game. He went wicketless while Tabraiz Shamsi snared three in Sri Lanka’s total of 287. There’s this talk of Maharaj being a very diligent […]
By Rohit Sankar Wed, 2 Oct 2019 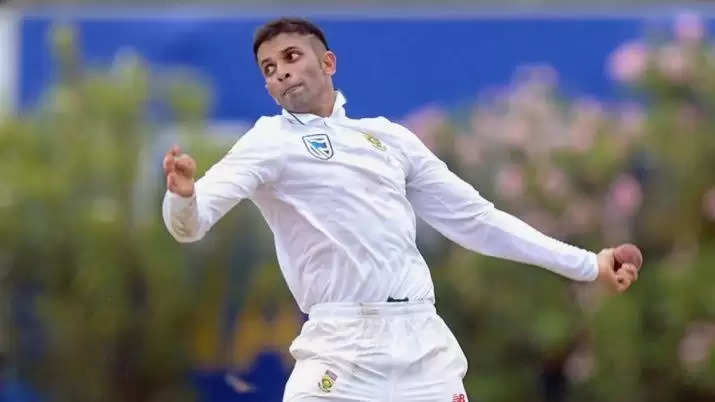 In his very first innings in Asian conditions, Keshav Maharaj bowled 17 overs in hot, humid conditions at Galle fighting off the sickness that kept him out of the warm-up game. He went wicketless while Tabraiz Shamsi snared three in Sri Lanka’s total of 287.

There’s this talk of Maharaj being a very diligent hard worker. Whatever work that went into his resurgence, in the second innings of that very Test, Maharaj showed how clever a bowler he can be in such conditions.

He mopped up the cream of Sri Lanka’s middle-order – Dhananjaya de Silva, Kusal Mendis and Angelo Mathews – with three very different deliveries, each of which in a way underlines the subtle variations that a spinner is expected to possess in order to succeed in Asian conditions.

De Silva was cleaned up by one that turned sharply off the surface from middle and leg to pluck out the off-stump. Mendis was worked over by a delivery flighted well above the batsman’s eyeline and Mathews was undone by an arm ball, sliding in to hit the middle pole.

Maharaj finished with four in the innings and as we all know went on to grab a record nine-wicket haul at Colombo to complete a sensational maiden Asian tour with the South African side. 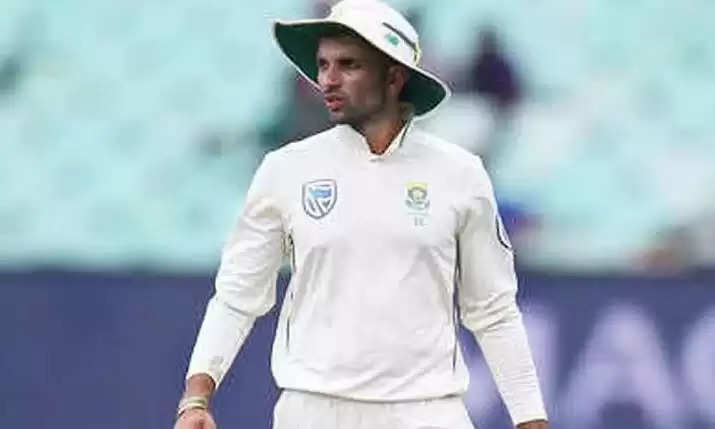 At Visakhapatnam on day one, Maharaj was perhaps the most enthusiastic South African early in the morning. He was seen bowling in the field before the toss and appeared to be loaded with bundles of energy then.

From walking up to Vernon Philander to share a high five before the first ball of the day to enthusiastically clapping after each ball of the new ball spell, the spinner seemed quite eager for the massive challenge ahead.

As the day progressed and India were edging closer to the tea break with the total creeping in on 200 without the loss of a wicket, Maharaj appeared a tad frustrated. When Rohit walked out to chip one back at the bowler, Maharaj threw the ball back immediately almost as though to pull off a Sheldon Cottrell kind of run-out.

But Rohit was well inside the crease by then and the throw was merely borne out of the frustration of toiling away fruitlessly on a slow, placid wicket on day one of the Test match.

The lesson had been learnt, the hard yards done. Maharaj would have hoped for a better first day at office when he took the field. In his 23 overs, the left-arm spinner, whom the skipper trusted the most through the day, kept the Indian batsmen silent but the one reward he constantly sought never arrived. 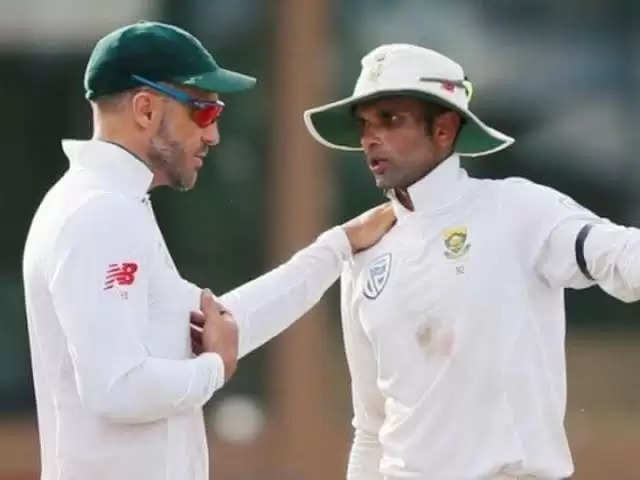 It isn’t to say Maharaj bowled poorly. He varied his release points at the crease, altered his length and pace and even produced a few round arm variations to beat the edge a few times. In hindsight, on another day, Maharaj might even have got a couple of wickets.

He clearly lacked support form the other end and except for a small phase of play after lunch when Vernon Philander kept the other end tidy, Maharaj barely had quality support from his spin partners in particular.

But his frustration in those final few hours wasn’t borne out of a lack of support. It felt more like a personal check box he had failed to tick off.

The left-arm spinner has all qualities of a hard-working class topper. Before the Sri Lankan tour last year, he spent days with South Africa’s performance analyst Prasanna Agoram in Bangalore to work on the dusty wickets and get himself accustomed to the conditions on offer.

He talked about learning from Rangana Herath and as though to emphasize he did, took cues from the veteran spinner’s subtle release point variations on day one at Vizag. Before the first Test, Maharaj talked about India’s class toppers in these conditions – Ravichandran Ashwin and Ravindra Jadeja – and hoped to emulate them.

“Look at Jadeja and Ashwin. Ashwin has got a lot of variations and Jadeja keeps it simple but the key is consistency and that make it uncomfortable for the batsmen. I can (want to) emulate that going forward and do my job from one end,” Maharaj had said.

Every bit of those words proved to be quite important after day one. Yes, Maharaj bowled well. He was consistent, hit the right length often and even beat the bat a few times. But did he make the batsmen uncomfortable? Did he do enough to sow the seeds of doubt in the minds of Rohit Sharma and Mayank Agarwal.

Spin bowling is a clever art. Not many have the will and patience to master it. Ashley Mallett, the greatest Australian spinner at one time, once wrote on ESPNCricinfo about how a spinner can break a batsman’s rhythm. He cited the example of another left-arm spinner who had succeeded in India – Steven O’Keefe, the last man to beat an Indian batting line-up at home – while stating his point.

As a spinner, to befuddle a batsman on a slow wicket, you need to be able to cheat yourself. Trick yourself into believing that you are doing the same thing repeatedly and then surprise yourself with the variation.

The first ball of the day at Vizag was a clear indication of the kind of wicket on offer. The ball arrived ever so slowly at Mayank Agarwal and the batsman had enough and more time to negotiate it.

On slow surfaces, when you flight and loop too much, even if there are subtle variations, good batsmen have the time to adjust and recalibrate. Maharaj’s stock ball was perhaps close to being perfect. That’s one reason why you wouldn’t be reading or hearing about him bowling bad on day one.

But his variations – the ones which would have got him wickets on this lifeless day one pitch – clearly lacked oomph. When he did unleash them, there were early indications of what it might do. For instance, late in the day when he did find the right length to beat Rohit Sharma’s bat, Maharaj went wider of the crease and produced a round-arm delivery that turned sharply. Next ball, he was closer to the stumps as he bowled the stock ball which Rohit negotiated easily. 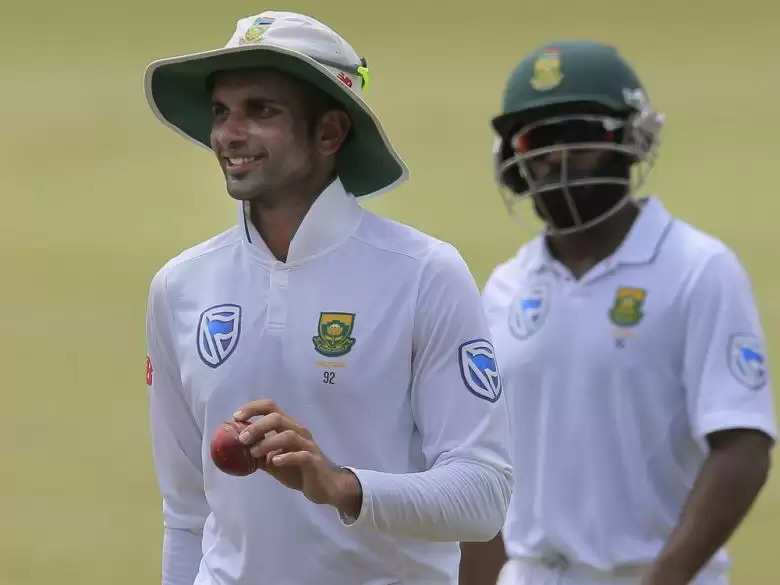 Many a times, the follow-up delivery to a brilliant ball is what fetches a wicket. If Maharaj had gone wider again and delivered his stock ball, Rohit might have been in two minds, in turn producing an error.

With the surface being slow and Maharaj’s variations being predictable, the Indian openers had leeway to stick to their game plan.

At first glance, it was a fine day for Maharaj and a very ordinary day for the rest of the Proteas bowlers. But the hard-working class topper would know that he wasn’t at his best and didn’t do enough to make the batsmen uncomfortable.

Like with Galle, Maharaj would have learnt his lesson. There’s a reason why he is near the top of the pile of non-Asian spinners in recent times. If he can take cues from Jadeja – a wily customer on such wickets – and vary his pace and length with better subtlety, the South African would have much better days this tour.