Debutant left-arm spinner Shahbaz Nadeem on Monday said he was nervous for exactly three balls in his maiden Test appearance against South Africa and his wealth of experience in first class cricket prepared him for international challenge on short notice. Nadeem was drafted into the squad for the third Test after Kuldeep Yadav suffered a […]
By PTI Mon, 21 Oct 2019 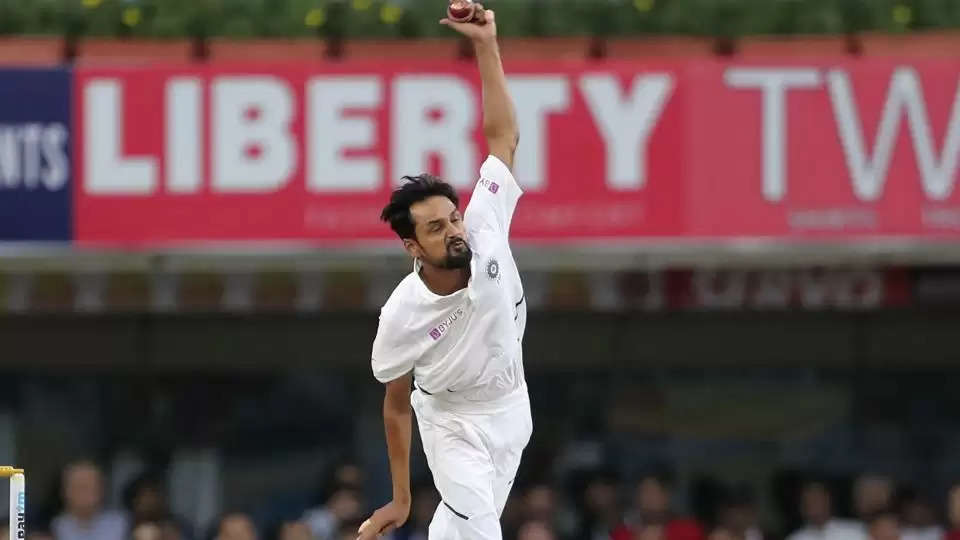 Debutant left-arm spinner Shahbaz Nadeem on Monday said he was nervous for exactly three balls in his maiden Test appearance against South Africa and his wealth of experience in first class cricket prepared him for international challenge on short notice.

Nadeem was drafted into the squad for the third Test after Kuldeep Yadav suffered a shoulder injury.

The 30-year-old took two wickets on his debut at his home ground, sending back Temba Bavuma and Anrich Nortze during South Africa’s first innings which folded for 162 on Monday.

“I was excited, and a bit emotional too, but then I concentrated on what I had to do in the game. I was nervous for the first three balls, especially during my run-up. My nerves settled during the fourth ball,” said the late-bloomer, who got his maiden Test call up 15 years and 110 first class matches after he made his Ranji debut back in 2004-05.

“When you have played cricket for so many years, you’re ready to play 6am in the morning after getting a 4 am call. It was around 2.30pm on Friday and I was observing Namaaz (prayer) when my phone kept ringing. I finished my prayer and saw that I was being called for the Test. I came by road from Kolkata,” Nadeem, who is now based in Kolkata, said.

“It’s been a good journey, I had to work hard to reach here. As a cricketer you dream to come on TV after seeing many players on TV. I also had dreamt that people should watch my performance on TV. It feels great.”

Nadeem had his “big moment” when he foxed Temba Bavuma (32) for his first wicket in international cricket.

“It was an ideal left-arm spinner delivery. It’s not just IPL. We have a lot of India A matches which help you knowing the opponent players well. You know their strengths. Four-five players from this team played in the touring South Africa A series earlier.

“IPL is such a format where batsmen attack you. So it helps you in controlling your nerves better. So you when have already played at that stage, you don’t feel new the feeling is kind of similar,” Nadeem who played for Delhi Daredevils and Sunrisers Hyderabad in the IPL said.

Nadeem said he needs to work on his bowling action to be more effective.

“I have been working on my follow-through, and I need to ensure that my body weight goes on with my action.

Nadeem said he relished the experience of bowling alongside the seasoned duo of R Ashwin and Ravindra Jadeja.

“It’s fun. They can share their experiences, and what to do, and what not do. They are probably two of the best spinners in the world, and there’s so much to learn from everything they do.”

“It was about bowling to our individual strengths. We were planning for each batsman and what shots they’re playing the most. But we were bowling on our own as I have a different style than him. (Jadeja) It’s more beneficial if you bowl to your strengths than copying each other.”

Nadeem made his debut for Jharkhand side that featured MS Dhoni who was yet to play for India then.

Nadeem further revealed he had to change bowling from flat trajectory to adapt himself to playing on greentops for Jharkhand.

“We were a team full of fast bowlers, there was hardly any spinner in the side as we were playing on greentops. The ball was skidding a lot with the pace I was bowling.

“I started bowling flighted deliveries so that I can get something from the pitch. I had to learn the flight variations and it helped me in early stages. After four-five seasons in the Ranji Trophy,” he said.