214 was South Africa’s highest total in the Test series in 2015. They had been rattled by spin. This time, when they were three-down for not too many on the second evening, it looked like a similar script would follow. However, they turned it around like never before. The determined South African batsmen scored more […]
By Sahil Jain Sun, 6 Oct 2019 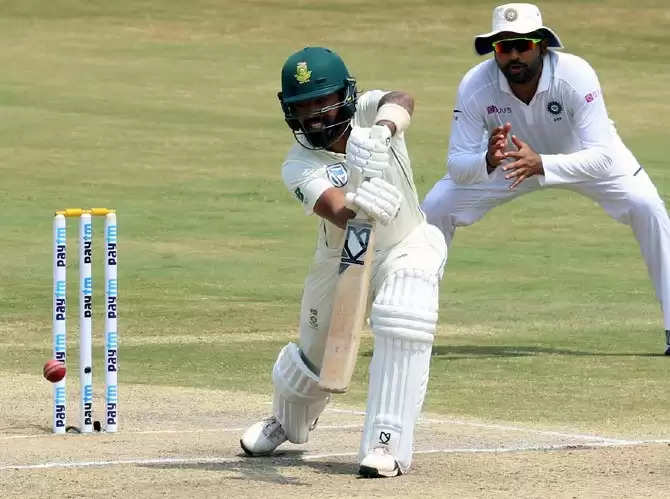 214 was South Africa’s highest total in the Test series in 2015. They had been rattled by spin. This time, when they were three-down for not too many on the second evening, it looked like a similar script would follow. However, they turned it around like never before.

The determined South African batsmen scored more than double their highest score in 2015 –  a commendable 431 as they gave India a tough fight. For most part of the 131.2 overs, they frustrated the hosts and especially their spinners. The likes of Dean Elgar, skipper Faf du Plessis, Quinton de Kock and the lower order showed grit, resilience and great application. They were troubled by the spinners on occasions but it didn’t seem as if Ravichandran Ashwin and Ravindra Jadeja were on top.

Hence, it can be said with a certain amount of assertion that the South African batsmen excelled in their first innings in the Test series with the bat. Yes, the pitch was pretty different from what they got back in 2015 but the application and the grit was evident too. They never allowed the spinners to settle, they played the pacers well too.

Moreover, this may have played a role in India delaying their declaration. India could’ve declared well before their lead swelled up to 395 but South Africa’s first innings effort may have well played on their mind. And just when it seemed, India may have declared a bit too late and it may come into play, South Africa’s second innings showed it was not.

Their second innings was a stark contrast when compared to their first innings. Yes, no doubt that the pitch had deteriorated but it wasn’t as bad as South Africa batted. There was no application whatsoever. Be it against Jadeja or Mohammad Shami, the batsmen fell away like ninepins before two lower-order batsmen showed how to survive on that pitch.

Across four days, only 21 wickets had fallen. India had lost just 11 wickets across two innings. Hence, this was a pitch where you could survive. However, South Africa simply crumbled. Shami cranked it up and found his rhythm which went missing in the first innings. He castled three South African batsmen. At the other end, Jadeja ripped it and caused problems and kept picking wickets.

In fact, at one point, it seemed like it could all be over before lunch. It was Ashwin who opened the floodgates when he knocked over Theunis de Bruyn. Shami then came in and ripped through the defences of Temba Bavuma, Faf du Plessis and Quinton de Kock. Jadeja picked up three in quick time to leave South Africa reeling at 70/8 with over half an hour to go for lunch. 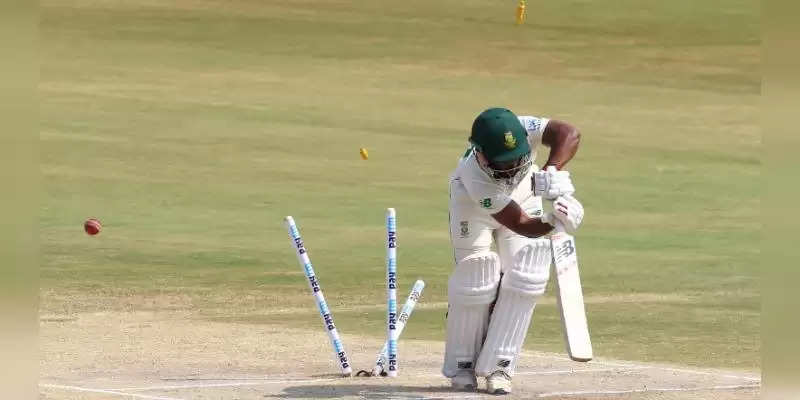 Bavuma was cleaned up by Mohammed Shami

That was the time Dane Piedt joined Senuran Muthusamy in the middle. Muthusamy had already shown great application in the first innings as well. He had batted for 106 balls and was unbeaten as well. These two showed the top order how to bat on a fifth-day pitch which wasn’t that day as it was made to be.

The Muthusamy-Piedt partnership first delayed the inevitable and pushed the lunch interval. They then batted through to lunch before frustrating the Indian bowlers after lunch as well. The duo mixed caution with aggression as they slowly grew in confidence. They hardly seemed to be in trouble. They trusted their defence and when they felt the need, they attacked and got good results too. In fact, it was the No. 10 Piedt who led the way first before Muthusamy followed. Thus, the way they tackled the Indian spinners was brilliant.

As a matter of fact, they put on way more than what the first eight wickets together managed. They showed the rest of the batting line-up that you could survive on this pitch. They just needed to apply themselves a lot better. This ninth-wicket partnership showed that the demons were in the batsmen’s mind and not so much in the pitch.

Muthusamy and Piedt put on 91 as they defied India a wicket for 32.2 overs. The latter scored his maiden fifty and Muthusamy was stranded on 49 as the other two wickets fell. In fact, the left-handed all-rounder was the only South African player to play more than 100 balls in both innings of this Test. Thus, it showed that if the top order could show some patience and resolve, things might’ve been different.

Hence, it was a lesson for the top-order. They never showed patience or the grit to survive. The defeat was inevitable after the crumble in the morning session. The mountain was too big to climb anyway but it was due to an excellent resistance for the ninth wicket that delayed the loss.

Thus, all the promise, the fight, the application and the grit showed in the first innings by the South African batsmen went missing on the fifth day. And that’s what hurt them the most. Moreover, it wasn’t the spinners that ran riot in the second innings. Shami ripped through and picked up a fifer to leave the South Africans rattled.

In all, it was a peculiar game for the Proteas with the bat. On top of their game in one innings to crumbling and crashing down in the other, it was a game of two contrasting innings for South Africa.