Batting all-rounder Senuran Muthusamy on Wednesday realised his dream of playing international cricket for South Africa and he could not be happier that his debut is against the country of his origin: India. Though his family moved to South Africa from Tamil Nadu generations ago, the 25-year-old from Durban is no stranger to India, having […]
By PTI Wed, 2 Oct 2019 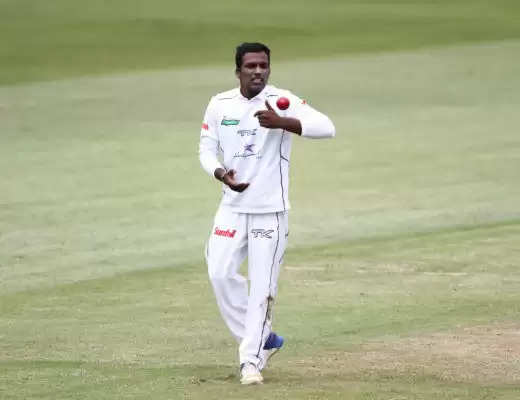 Batting all-rounder Senuran Muthusamy on Wednesday realised his dream of playing international cricket for South Africa and he could not be happier that his debut is against the country of his origin: India.

Though his family moved to South Africa from Tamil Nadu generations ago, the 25-year-old from Durban is no stranger to India, having toured here with South Africa A last year.

He has been born and brought up in South Africa but says they are like “any other South Indian family” back home.

“Our roots are from Chennai. I have still got family in Nagapattinam (about 300 kms from Chennai). Many generations have passed through but the Indian connect is very much there and our culture is very much Indian,” Muthusamy told PTI ahead of the first Test.

“My parents were ecstatic when they found out about my selection (for South Africa) and my debut tour against India makes it even more special.”

Talking about his Indian lineage, Muthusamy said: “I do yoga back home in Durban which has the largest Indian population in South Africa. We visit temples regularly and some of my family even speaks Tamil. Unfortunately I don’t but I am slowly starting to learn the language.”

With Keshav Maharaj, another South Africa cricketer of Indian origin, and Dane Piedt certain to feature in the eleven as the specialist spinners, left-arm spinner Muthusamy was not sure about his selection.

However, the dry conditions here forced South Africa to rethink their plans and they included Muthusamy as the third specialist spinner, who considers himself more of a batsman.

Tour of India with the A side and stint at an academy in Bangalore has prepared him for the grind in sub-continental conditions.

“You really got to deal with the heat. There is more pressure on the spinners here to win the game and it is about being consistent. It is the other way around back home. We come into play only in the fourth innings,” he said.

“I have learnt a lot with the bat as well. Adjusting to the wickets in India where the bounce is a bit lower. You got to deal with reverse swing a lot more. I am sure I can learn lots more during my time here,” added Muthusamy, who believes his biggest strength is his wicket-taking ability.

One would expect that he would name a South African or an Indian cricketer as his role model but Muthusamy has most respect reserved for the two famed Sri Lankans — left-arm spinner Rangana Herath and the great Kumar Sangakkara.

“I have really admired Herath and Sangakkara growing up. Sangakkara for just the way he went about his batting, his cricket, his life off the field. He is someone I have always looked up to.

“I look up to others too like Shakib Al Hasan, Moeen Ali, Bishan Bedi but those two I have enjoyed watching the most,” he said.

The ability to take wickets and control run-rate at the same time has been the reason for his success in domestic cricket and he wants to emulate that for South Africa.

“Another thing I would like to do is play more T20 cricket,” he added.