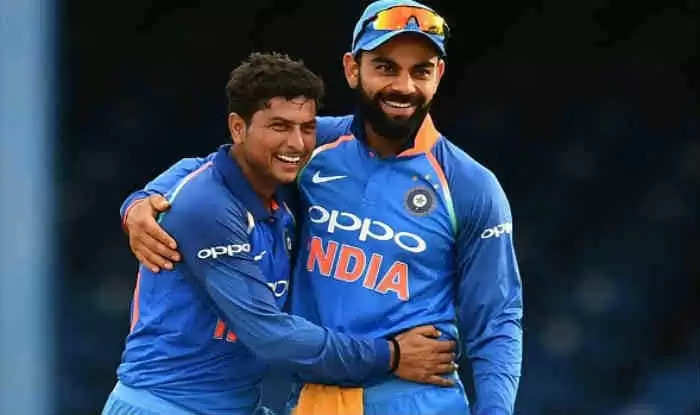 Indian captain Virat Kohli on Wednesday said the way his side have been posting big totals after being put in to bat in the last few one-dayers showed that the team was not over reliant on toss.

India scored a massive 387 for 5 after being put in to bat by West Indies with Rohit Sharma and KL Rahul hitting centuries before Kuldeep Yadav topped it up with a hat-trick to clinch a series-levelling 107-run win against the West Indies in the second ODI here.

“In the last three games, including the one at Wankhede and first two ODIs (of this series), we’ve batted well in first half. Batting second isn’t an issue, we’re one of the top sides, if not the best, while chasing. As a captain, nice to see the way we’ve batted first after losing the toss. It shows we’re not reliant on the toss,” Kohi said after the match.

“It’s always good to get 40-50 extra and we want to bat the opposition out of the game. Rohit and KL were outstanding, the opening partnership set it up. Shreyas and Rishabh, the way they played, was outstanding,” he added.

Asked about the 34 boundaries and 16 sixes India hit during the innings in view of the T20 World Cup next year, he said, “The more we get confident in T20s while batting first, the better. There’s no major 50-over cricket now, so we need to just play fearlessly, which is the need of the hour.”

Kohli, however, made his displeasure known about the poor fielding in the last two matches, saying the team will need to maintain high standards in all the departments of the game.

“Reviews are always left upon the keeper and the bowler. Wasn’t really pleased with how we took the review. Catching has been disappointing. We need to field better, we can’t afford to drop catches like we have. It is important to maintain standards. We are one of the best fielding sides in the world,” the Indian captain said.

Asked what was the reason for the poor fielding, he said, “Fielding is all about wanting the ball. As long as we are enjoying that, we will be right up there on the field as well.”

Kohli said that the issue of the number 4 batting slot prior to the 50-over World Cup was blown out of proportions.

“If the number 4 doesn’t get to bat consistently, then it doesn’t help. We are just happy that a youngster (Shreyas Iyer) has come in and is playing freely.”

West Indies captain Kieron Pollard said his side gave away too many runs at the back end.

“We were not able to execute our plans how we want to. 40-50 runs less, it might have been little different. Rohit batted well and so did KL Rahul. That allowed the other batsmen to play freely (in the death overs). We thought and saw that it will be a good wicket. They were able to get away from us at back end,” he said.

“But it also showed, in order to win they have to score big against us. It was a matter of execution for us. There are some youngsters and there are some talented ones. Pooran we got a glimpse of him tonight. Nothing happens overnight, it’s about putting the pieces of puzzle together, they are a work in progress.”

Asked about both captains — him and Kohli — scoring a duck on Wednesday, he said, “Didn’t spend much time in there. Virat would look to come hard in the final game.”

Man-of-the-match Rohit Sharma said it was a much needed victory for India.

“We had a very very crucial partnership. KL batted brilliantly and allowed me to take my time. KL is such a talent when you watch it from the opposite end. He is growing in confidence.”

He said his partnership with KL Rahul was new and the running between the wickets was not up to the mark.

“But we will get better. We can take a lot of confidence from how we built that partnership. Once you get past your 100, you should bat as long as possible. As long as a set batter is out, you can get how much you want. I have played 200 plus ODIs, it is my responsibilty to get as many runs as I can for the team.” PTI PDS