Mohammed Shami’s lethal spell of fast bowling was beautifully complemented by Ravindra Jadeja’s guile as India recorded a resounding 203-run win victory over South Africa in the opening encounter of the three-Test series here on Sunday. The victory consolidated India’s position in the ongoing World Test Championship with another valuable 40 points added to their […]
By PTI Sun, 6 Oct 2019 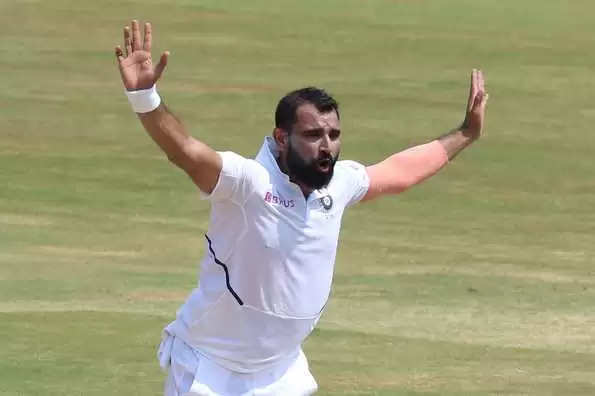 Mohammed Shami’s lethal spell of fast bowling was beautifully complemented by Ravindra Jadeja’s guile as India recorded a resounding 203-run win victory over South Africa in the opening encounter of the three-Test series here on Sunday.

The victory consolidated India’s position in the ongoing World Test Championship with another valuable 40 points added to their kitty. India maintain their lead with 160 points.

Chasing an improbable 395-run target, South Africa were expected to put up a fight like they did in the first innings but Shami’s (5/35 in 10.5 overs) fifth five-for topped up by Jadeja’s four-wicket burst saw South Africa dismissed for 191 in 63.5 overs.

Debutant Senuran Muthusamy (49 not out) and Dane Piedt (56 off 107) delayed the inevitable with a fighting 91-run stand for ninth wicket after South Africa collapsed to 70 for eight in the morning.

The second Test of the three-match series will be played in Pune from October 10.

The pitch, which had played fairly for the first four days with the odd ball surprising the batsman, turned tricky on day five.

The spinners got the ball to turn sharply and the variable bounce also helped the pacers, as predicted by Cheteswar Pujara on Saturday.

The collapse began in the second over of the day when Ravichandran Ashwin castled Theunis de Bruyn (10) with one that turned back sharply from wide outside of the off-stump for his record equalling 350th wicket.

With that dismissal, the 33-year-old became the joint fastest to 350 wickets, matching Sri Lanka legend Muttiah Muralitharan’s feat in his 66th Test.

Bavuma stayed back to a delivery that kept low while jagging back in while Du Plessis offered a leave to another one which also cut back in, only to see his stumps rattled. Shami got rid of De Kock with a delivery that held its line after pitching.

“It’s difficult to bowl on such a wicket because it was getting slower. So the plan was to bowl at the stumps. Jaddu and Ash bowled well. We knew variable bounce and reverse swing would help us in the second innings. So we tried to attack the stumps. It was important to get the top batters out as early as possible,” Shami said after the match.

It became 70 for six in the 27th over when opener Aiden Markram (39) did not get the required elevation and Jadeja took a brilliant one-handed reflex catch off his own bowling.

In the same over, he trapped Vernon Philander and Keshav Maharaj in front of the stumps off successive balls to make it 70 for eight.

Piedt and Muthusamy frustrated India with their nothing to lose approach. Piedt’s slog sweep over deep mid-wicket went the distance for the 36th six of the game, breaking the record for most maximums in a Test. The off-spinner played well to complete his maiden half-cemtury in his eighth Test.

It seemed the game would get over well before lunch but Piedt and Muthusamy took South Africa to 117 for eight at the break. They went on to bat for one hour after lunch with India unable to find to break their stand.

Shami, who provided three quick wickets in the morning, was brought back into the attack noticeably late into the second session and struck on the very first ball with Piedt playing on to this stumps. It was a loosener but potent enough to break the off-stump.

India’s victory was set up by Rohit Sharma, who became the first batsman to score two hundreds on debut as a Test opener, and Ashwin, who took a seven-wicket haul in the first innings.

It was also a match to remember for Mayank Agarwal, who scored a double century to take India to 502 in the first essay.