It was back in 2010 that the world and India, in particular, took notice of a nippy left-arm fast bowler, Jaydev Unadkat. He led India’s attack in the Under-19 World Cup in January and less than a year later, he was in India’s three-pronged pace attack facing South Africa in Centurion. Unadkat was Zaheer Khan’s […]
By Sahil Jain Thu, 5 Mar 2020 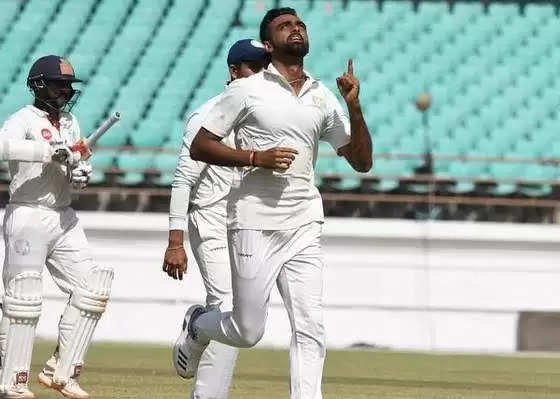 It was back in 2010 that the world and India, in particular, took notice of a nippy left-arm fast bowler, Jaydev Unadkat. He led India’s attack in the Under-19 World Cup in January and less than a year later, he was in India’s three-pronged pace attack facing South Africa in Centurion. Unadkat was Zaheer Khan’s replacement and was touted to be the next big left-arm pace sensation who’d follow the footsteps of the great left-arm pacer.

However, after 26 overs and conceding 101 runs, he was on the bench for the series first before being ousted from the squad. There have been a couple of comebacks to the national team through the shorter formats but all Unadkat has managed to play apart from the only Test match in 2010 is seven ODIs and 10 T20Is, picking up 8 and 14 wickets respectively. Early 2018 was the last time he donned the India blue.

However, it’s not for his efforts or appearances in the Indian team that Unadkat is known for. His 24-wicket IPL season in 2017 broke headlines and that paved a way back into the Indian team again for him. But that season has played a massive role in his career and it’s Rajasthan Royals (RR) who’ve paid the big bucks on multiple occasions to avail his services season after season. All he is remembered for is his white-ball exploits and RR’s strategy of first releasing him and picking him again for a cheaper rate in the auction.

Amidst this IPL madness, everybody seems to have forgotten Jaydev Unadkat, the red-ball bowler. And the left-arm fast bowler from Saurashtra decided that it’s high time to remind people of his ability in the longer format of the game.

That’s each of his performances in this Ranji season. Not once did he go wicketless.

He’s broken most wicket tallies already this year. Unadkat went past Dodha Ganesh’s tally of 62 which was the highest for a fast bowler in the history of Ranji Trophy. Moreover, he is just three wickets shy of becoming the all-time leading wicket-taker in a single Ranji edition –  Ashutosh Aman who picked up 68 wickets in the Plate Division in the 2018-19 season. He’s picking up at least four or more wickets in a single innings on an average and has picked up a five-wicket haul once in every two innings.

He’s bowled on some dead wickets in Rajkot and in fact, since April 2013, no other bowler has a better record at the venue. Unadkat has picked up a staggering 56 wickets at an average of 17.63 in Rajkot while all the other pace bowlers average more than 40.

Forget Rajkot, take his performances this season. Every time Saurashtra needed a wicket, there was Unadkat bringing himself back into the attack and more often than not, he struck. Every time the team needs a spark, it’s Unadkat lifting the spirits with a wicket. The big semi-final against Gujarat was a big evidence of that. Just when the chips were dropping with Parthiv Patel stretching Gujarat into tighter territory in their chase, Unadkat came to the fore and blew away the Gujarat lower order. He’s constantly done that throughout the season. You look at the wins that Saurashtra have got and each of them have a Jaydev Unadkat six-fer at least.

Saurashtra hold their nerve in a thriller against Gujarat and reach the @paytm #RanjiTrophy 2019-20 final.

It’s not the first time that Unadkat is doing it. Even last season, he was at the top of his game, picking up 39 wickets at an average of 17.17 from eight games. But this time, he went one better and averages a stunning 12.16. Unadkat, the bowler has stepped up.

Unadkat, the captain has been very impressive too. He took over captaincy midway through last season which is never easy. But he’s produced results and that’s what matters. Saurashtra have made it to back to back finals of the Ranji Trophy and it’s Unadkat who has been leading the way with his performances with the ball.

Captain, leader of the attack, premier fast bowler, Unadkat is everything and has been donning multiple hats beautifully. The way he’s bowling, it won’t be a surprise if he breezes that 70-wicket mark with ease. Moreover, the final is in Rajkot which adds some extra wings for the left-arm pacer.

Midway through the Ranji season, the 28-year-old had admitted if he wants to play at the top level, he wants to be as good as Jasprit Bumrah. While Unadkat may not bowl like Bumrah, he’s certainly had the impact and even numbers like Bumrah.

Beware Bengal, here’s Unadkat coming to hunt for you. It’s his ground, it’s his season and it may well be him writing the script as well. Another six-wicket haul might be loading and Unadkat might well be leading Saurashtra to glory.