SA v ENG: Anrich Nortje ducking under temptations to seek revenge has to be the moment of the Test match

It’s difficult to be the change seamer in a South African pace attack. Imagine Morne Morkel in the era of Dale Steyn and Vernon Philander. Imagine Andre Nel or Jacques Kallis or Nantie Hayward when Shaun Pollock and Allan Donald alongside Makhaya Ntini were ruling the roost. Standing out is an impossible task because there’s […]
By Rohit Sankar Sun, 29 Dec 2019 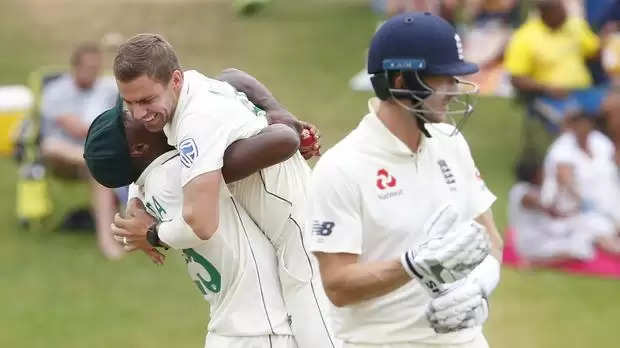 It’s difficult to be the change seamer in a South African pace attack. Imagine Morne Morkel in the era of Dale Steyn and Vernon Philander. Imagine Andre Nel or Jacques Kallis or Nantie Hayward when Shaun Pollock and Allan Donald alongside Makhaya Ntini were ruling the roost. Standing out is an impossible task because there’s only so much you can do if the cream of the opposition side is already wiped out by the time you are on.

The challenge facing Anrich Nortje at Centurion was even stiffer. Lungi Ngidi (6/39 vs India at Centurion), Duanne Olivier (3/38 and 2/19 vs Sri Lanka at Johannesburg), Kyle Abbott (7/29 vs Pakistan at Centurion) and Marchant de Lange (7/81 vs Sri Lanka at Durban) are all recent pace bowlers before him who made an instant impression in their first home Tests.

Nortje’s ears, after a solid 89-ball vigil as nightwatchman, must still have been buzzing with the sound of balls whizzing past his head when he got the ball on day four with South Africa under the pump after a defiant Rory Burns knock.

Proteas had a clear plan against Burns all Test match, one that the southpaw from Surrey had countered with aplomb on day three and early on day four. Targeting his fourth-stump weakness with Philander and Rabada had reaped no benefits and Faf du Plessis turned to Nortje after 10 wicketless overs in the day.

Off his first ball, Nortje steamed in and delivered a perfume ball just over Burns’ shoulders as the batsman, clearly not expecting the bumper, swayed away at the last moment. It is unnatural for bowling teams to deviate from their set plan A’s, especially for a disciplined unit like South Africa. As such, Burns would have anticipated the familiar line of attack from Nortje after being pushed onto the back-foot first ball.

Instead, the pacer sent down another pacy bouncer and the well-set opener instinctively pulled. When the top-edge was found, Burns instantly packed his belongings, wore a desperate look and started walking back even before the catch was completed.

Rabada, who took the catch, celebrated more than Nortje’s fist-pumping, clearly grasping the value of the big blow. But Nortje wasn’t done. The first ball tonew man Joe Root was an in-decker that beat him for pace and movement and hit him on the thighs. The second,  a 144kmph yorker that the England captain just squeezed out. The next two deliveries generated more oohs and aahs from the cordon as Root looked all at sea against Nortje.

This first over on day four from Nortje would remain rather underrated in the context of the game, but it set the tone for the day for the Proteas bowling attack. It was evident in Rabada’s reaction, du Plessis’ exaggerated hug and de Kock’s zealous appeal to the first delivery that Root faced and missed. Nortje set the adrenaline in motion and the Proteas, on the back of five straight losses, started believing for once that they were in a winning position here. They were. They always were. But such was the momentum-sucking opening stand that Burns and Dom Sibley put up that it seemed like South Africa had indeed forgotten how to win.

South Africa have only bowled 4 deliveries that were projected to hit the stumps this morning. That's only 4.5% compared to 10.2% for the rest of the Test.#SAvENG

Even as Keshav Maharaj and Rabada dismissed Ben Stokes and Jonny Bairstow to firmly tilt the game South Africa’s way, the presence of Root at the crease was making du Plessis’ side uncomfortable. The target was still too far away to generate any squirms in the change room, but this was a nervous side; a vulnerable side with strains of internal battles evidently showing.

Nortje yet again provided the spark and sealed the Test when he had the England captain edging in the corridor of uncertainty two balls into his new spell. South Africa’s battle was done and dusted then, but not Nortje’s. He was up against the man who had dished it out at him – Jofra Archer.

The pacer had held back the temptation to bowl bumpers – a give it back sort, if you may –  even as a lot of his mates went short against Denly and Root early on. With teammates in his ears as Archer walked in, reminding him about the barrage he received, Nortje hesitantly bowled a decent bumper at the tail-ender first up. The follow up ball had less revenge and more brains as he went short, but not bouncer-short, and generated extra bounce to catch Archer’s edge.

His three wickets in the innings pales on the scorecard with Kagiso Rabada snaring four, but Nortje set up this win for the Proteas, first with his extraordinary bravado – including ducking under two Archer beamers on day two – with the bat, then with a probing spell early on day four and then the match-sealing wicket of Root.

My word Nortje will be unplayable in Cape Town I reckon. Vern always good there. Rabada just has to be himself. Can't see England scoring more than 250.

Having faced innumerable short balls and chin music as nightwatchman, it would have been rather easy for Nortje to get carried away – possessing some pace and bounce himself – and go for some head hunting as revenge. Instead, his maturity shone through as he did what the situation demanded him to do. Sure de Kock’s blinders set up this game for the Proteas and he perhaps deserved the Man of the Match award, but without Nortje coping body blows with the bat and then dishing telling blows with the ball, this Test would have swayed England’s way.

“You were all raving about Jofra Archer. Just watch how Nortje bowls,” South Africa’s performance analyst, Prasanna Raman, had said in an exclusive a few months back. Going by this show at Centurion, Nortje has indeed arrived.